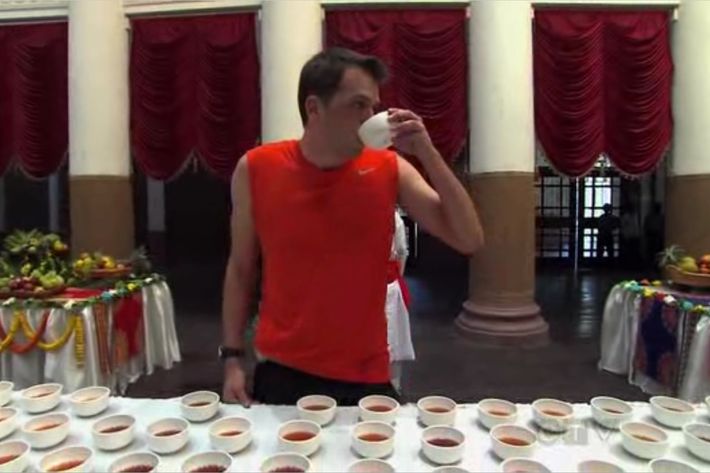 Our teams were not pleased at the start of last night’s Amazing Race, as they were very disappointed to start the leg with a task in China and not a flight elsewhere. Was riding a yak really that bad? Surely Ron wanted more dumplings? Lucky for them, their time in China was limited, as they simply had to stop for a tea tasting before boarding a plane to Kolkata (the right way to spell Calcutta), India. Mallory enjoyed it, as she had many tea parties as a child, and kept her pinky up the whole time. Can’t drop your manners just for a race around the world!

After arriving in Kolkata in the middle of the night, the teams had to camp outside the town hall until it opened at 10 a.m. Except for a comment from Gary and Mallory, there was surprisingly little mention of the fact that many Indians sleep this way every night, and absolutely no shots of anyone doing so. What are the chances they put everyone in a hotel for safety and edited that part out? (Not that safety was a concern in the cabs — Margie and Luke’s driver drove on train tracks, Zev and Justin’s ignored all red lights, and Ron and Christina almost got hit by a truck.)

The town hall contained this season’s needle-in-a-haystack Road Block: taste their way through thousands of cups of tea until each Racer found a cup that tasted like the tea in China. Hope you kids were paying attention! Ron found the correct tea pretty quickly by sniffing the different cups, but for some reason most teams did not immediately copy this method and had considerably more trouble. Justin told Zev to think of it as “tea pong” to power through, Jen told Kisha to match the tea to her skin, and Mallory just looked like she wanted to puke for the entire task. This Road Block really ended up being one of the most frustrating tasks we’ve seen in some time. Zev smashed a cup in anger, Luke broke down crying — we could really get a sense of just how difficult this task was, as we’ve not yet seen anyone look so frustrated during this Race. Also, didn’t everyone have to stop to pee constantly after this task? Nice editing any sign of that out, producers.

Once teams finally did finish the task, they followed the clue on the cap of their Snapple bottle to a tea stall in another part of the city. Did anyone else find it odd that they removed the Snapple label despite it very clearly being a Snapple bottle, and Snapple sponsoring the entire episode? If you’re going to be paying for an episode like this, why not milk the product placement all you can and have a label? Or is Snapple trying to prove that they’re so recognizable you don’t need a label? Kisha and Jen took the Snapple-ness of it all so seriously that they didn’t even bother checking the cap, and instead went on a hunt for Kolkata’s Snapple factory (there isn’t one).

The tea stall sent them on the Detour, where they could paint, dress, and adorn a statue in Hindu art, or deliver schoolbooks in Bengali literature. The teams split fairly evenly between the tasks, and neither seemed too difficult — perhaps as a reward for such a time-consuming Road Block. None of the book-delivering teams got too lost, though they did feel like claustrophobic monkeys riding around in rickshaws. Kent and Vyxsin, in much better spirits this episode, had a great time painting their statue, with Kent remarking, “We draw on eyebrows every day. It was kind of like us getting ready in the morning.” Gary and Mallory, who went with books, finished first, much to their surprise. “You may have noticed all the tea references,” Phil said when they checked in. Wait, tea? There was tea in this episode? Not to mention a Snapple commercial every break? Did we miss something? At first it looked like Gary and Mallory’s only reward was to try the limited-edition papaya-mango Amazing Race Snapple, but then Phil decided to mention that they would also get a feast, a Bollywood dance performance (now that would be a great challenge), and a million rupees (more than $20K) courtesy of, wait for it, Snapple. Talk about a sponsorship! However, that tea sounds delicious and we would totally drink it. Damn you, product placement.

Sadly, while everyone else was bouncing around these tasks, the Globetrotters and Margie and Luke were still stuck drinking tea at the Road Block. Luke broke down again once the Globetrotters moved on, but all the workers in the town hall stopped what they were doing to cheer for him until he finished. It just goes to show what nice people Margie and Luke are, as Margie stopped to thank each of them for doing that before they moved on, despite how far behind they were. Unfortunately, niceness won’t save you from coming in last, and this was not a non-elimination leg (which must be coming up soon, no? Or did we get rid of those with the “keep racing after you check in” thing?). They’re still awesome in our book.

March Madness waits for no one (not even April), so no Amazing Race for two weeks! When we get back, expect a lot of digging in the mud and street noise. So, a super-exciting episode.