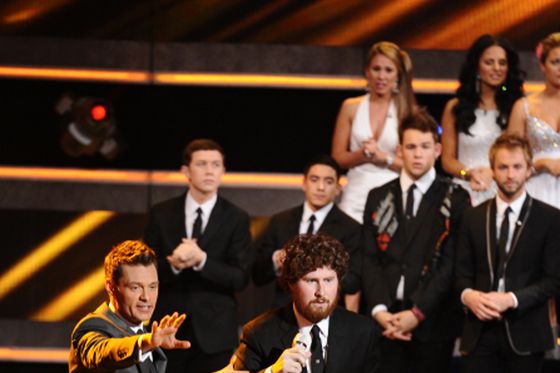 Okay. At great personal expense, I am watching last night’s show on my laptop in a hotel in Melbourne, Australia. I don’t know why I have made recapping this show such a priority in my life. I don’t know anything about myself anymore.

Ryan opens the show by informing us that over 30 million people voted for their favorite Idol contestants last night. This is more people than have voted for president in the last 200 years. He then throws to a produced package that’s all about pitch. Ten years in, and we’re just getting around to focusing on the true star of the show: pitchiness. It’s like when they say New York City was a character on Sex and The City. Now, when pitchiness needs to be busted, whom are you going to call? MARC ANTHONY! J.Lo’s husband stops by to instruct the kids on how to use in-ear monitors. I don’t know why he’s the expert. Maybe he manufactures his own line of in-ear monitors and he needs to move some product. Maybe they just needed to have him in some capacity because of J.Lo, and this was the busy work they found for him to do. In any case, I doubt he will have ended up helping. Maybe he could have showed up a little earlier in the season. I bet MySpace’s Karen Rodriguez would have liked to have had the chance to view Marc’s little educational film before she got booted.

Staying with the previous night’s theme of Motown, tonight’s group number is “Ain’t No Mountain High Enough.” As with all the group numbers so far, it’s a mess. Something happens halfway through where they don’t seem to be singing in time to the music anymore. It sounds exceedingly chaotic and odd, and especially embarrassing after the pitch showcase. DO I EVER NEED TO HEAR THIS MOTOWN SONG AGAIN? Sure.

Then Stevie Wonder comes out, gliding onto the stage on a littler stage all his own. At first it seems he has come to exact vengeance on the contestants for the torture of his songs the night before, but no. Stevie is there for fun. He sings the chorus of “Signed, Sealed, Delivered” a handful of times, and then … that’s it. How much does that cost, I wonder? For just the chorus of a song? I didn’t know artists had price packages like that. “For ten thousand dollars, I will sing the choruses of nine of my hits for one full hour. I’d give you a quote for one verse per song, but I want to help you stay within your budget.” After the fifth chorus, Stevie announces it’s Steven Tyler’s birthday. Stevie starts singing his own “Happy Birthday” song to Steven. I forgot that Stevie Wonder had his own birthday song that he can sing without kicking any greenbacks to Mildred & Patty Hill. Stevie Wonder and Bennigan’s, fighting the power. The whole gang sings along and Naima holds up a strange painting of Steven (ostensibly), which looks more like a colorful portrait of Ally Sheedy from The Breakfast Club.

After a break, it’s time for some product placement!

PRODUCT PLACEMENT THIS SEGMENT: Ford
It’s another great Ford music video! These are really growing on someone! I’m assuming! This one features the kids (including Casey this time) collecting bottles and cans and making a sort of mosaic on the ground that looks like a tree. I suppose this is some sort of recycling message, although it comes off more like, “If all the trees die, we can make things that look like trees with our trash!” I wonder if any contest-winning VIPs were there, and if they got to keep any old cans as “souvenirs.”

Enough pretend fun! Down to business. Ryan calls forth Scotty, Lauren, and Pia. They are all safe! And they are going on the summer tour! Don’t forget about the summer tour, everyone! It happens this summer!

PRODUCT PLACEMENT THIS SEGMENT: Sugarland, primary-colored clothing
After a break, Sugarland drops by for a performance, delighting everyone with their signature sound of pop/country/reggae/Celtic? They seem kind of … mature for the Idol demographic, which I have not bothered to research. I am not overly familiar with this particular group aside from their name, which always makes me think there was a VH1 movie made about them; but that was Sweetwater, who turned out to be a real band that I assumed was a fake band. This is all by way of saying, who cares.

Then there’s a clip package about professional wrestling. Seriously. As I type this, I cannot believe how long it is going on. All the kids talk about wrestling, how much they love it or are indifferent to it, and then we see them all wrestle each other. What is this doing here, exactly? I get the time-filling thing, I know, I know. But look, producers, no one would complain if you had another musical performance on your music show. Surely you could rustle up some rockabilly/Cuban/Tibetan throat-singing band to do a number and help time pass.

After whatever just happened, James and Paul are brought center stage. Ryan tells them they are not safe tonight. The audience throatily boos! Ryan goes on: “I mean you’re really not safe tonight.” Suddenly, the lights change! Survivor’s “Eye of The Tiger” plays! A wall opens, and who is standing there? Who do you think, dumbie? Hulk Hogan, of course! Mr. Hogan shambles out onto the stage, projecting an unseen bathrobe, and informs Paul and James that they are safe. And informs all of us that they’ll be on the tour. The tour is still a thing that is happening. Mr. Hogan then wrestle-punches Ryan, who goes flying into the audience. With this accomplished, Mr. Hogan tears his own shirt mostly off. As we fade to commercial, everyone goes insane. Including me, I think. I am not entirely sure this has not been a hallucination induced by jet lag. Fever dream or not, I am taken with J.Lo’s obviously sincere and delighted surprise at Hulk Hogan’s entrance. I wonder if she just has never watched television, ever in her life? There is such a detachment to her amusement, as if she does not work in the entertainment industry and doesn’t quite understand how people can do it for a job.

Back from the break. Back to judgment. Thia, Jacob, and Stefano are up next. Jacob is safe. Thia is in the bottom three. So is Stefano. Off to the Shame Stools with them! Guards! Bring me Naima, Haley, and Casey! Naima is safe! She will be going on tour! She is one of the weakest singers on this show! What a tour this will be! Then Ryan declares Haley to be safe, which means Casey is sent to the Stool-lag. Maybe America feels that his whole approach is wearing off, and he stood out more when the field was wider. But now everyone’s really Top 40-ing, and his “soul man” shtick just seems out of place here.

PRODUCT PLACEMENT THIS SEGMENT: The Idea of American Idol
Jennifer Hudson, Oscar winner and American Idol Season 3 seventh-placer, performs her song “Where You At.” Beyond the title’s grammatical issues, Jennifer is in fine voice. Ryan chats her up warmly, as she is now a part of his Formerly Fat Club. Ryan then addresses the bottom three. Thia is safe! Before the results, let’s go to some non-integrated commercials!

RESULTS: Okay, we’re back from the break, and it’s down to Casey and Stefano. Stefano is safe! It appears that Casey’s Blues Brothering is an acquired taste! Casey must sing for his life, and launches into “I Don’t Need No Doctor.” Just as it’s really “cookin,’” and Casey starts scatting, Randy calls for the music to stop. I think, Good call, Rand! None of us deserve to hear that scattery! The show is over, let’s get on with our lives! But wait, WHAT’S THIS?!

IS THE JUDGES’ SAVE IMPLEMENTED? Yes! Randy states that they already know what Casey’s all about; he doesn’t need to prove anything to them! They are implementing their one save! ABSOLUTELY EVERYONE ONSTAGE CRIES! Casey is overcome and looks fit to faint! O, the mind boggles trying to imagine the turbulent seas churning in Casey’s perfidious stomach upon this hour! Casey, practically prostrate with gratitude, approaches the judges in order to touch the hem of their collected garment. The crowd chants Casey’s name. Ryan hugs Casey. Casey sits down on the stage. Casey runs and hugs his parents. Naima tearfully applauds. Ryan reminds everyone that was the one save for the season. Pia tearfully applauds. Moe Green is shot through the eye on his Las Vegas massage table.

As the commotion dies down, J.Lo tells Casey that he needs to get back to the musician that he is. No more antics! Critiques like this make me wonder: Are there performances by the contestants that we at home don’t get to see? I mean, this is what the guy does, has done, and has kept doing since he auditioned — to what form is he supposed to be returning? Time was, I thought Casey could have taken the whole thing, but now I just have no idea about any of it at all. What does America want? Perhaps that’s too big a question for this recap. Sorry.

Two people get sent home next week. Will one of them be Casey? Even if it is, he’s still going on the tour! The judges’ save means that the top eleven will all be on the tour! DON’T FORGET ABOUT THAT TOUR!

See you next week, back on my regular schedule. Tour.

You can listen to Paul F. Tompkins’s podcast here, or subscribe on iTunes. He is also on Twitter as @PFTompkins.

American Idol Recap: Paul F. Tompkins Weighs In On the Casey Save