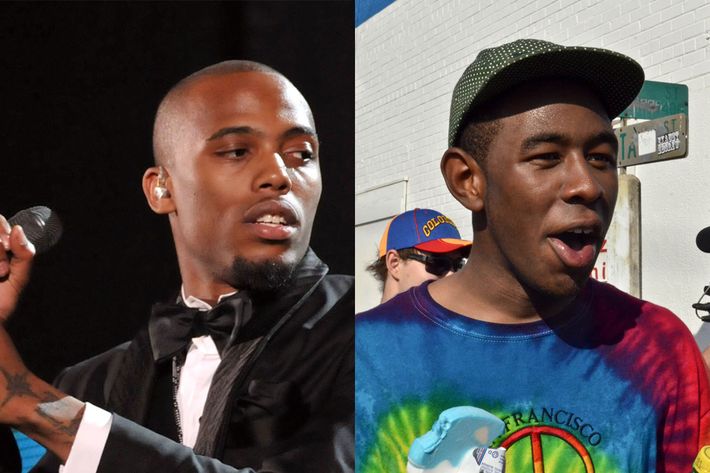 Great news! Looks like B.o.B. has finally gotten around to checking out Tyler, the Creator’s “Yonkers.” It’s great news because that right there is just a good song, and we’re honestly glad B.o.B. has heard it. More to the point, though: It’s great news because Tyler takes some time on “Yonkers” to just go in on B.o.B. (Specifically: He threatens to “crash that fucking airplane that that [expletive expletive] Bob is in” and to stab Bo.B. collaborator “Bruno Mars in his goddamn esophagus” and not “stop until the cops come in.”) And now B.o.B. is firing back. Fun for everyone!

The new track from the pop-rap prince is called “No Future,” but doesn’t get much more explicit than its title. That means lots of lines like “mmm, hey, I eat it like dinner / you see this shit I gotta deal with from these beginners” and “the future isn’t looking promising for these rookies” and “come get these pussies, wipe ‘em off the flo’ / I’m guessin’ they was hoping for some diff-a-rent results.” Hmmm. Yep. It’s doubly wack because any given music blogger, cognizant of the spectrum of responses Odd Future elicit, would have been able to hook B.o.B. up with some great material (something like “shallow shock rappers ripping off Eminem desperately holding on to blog hype,” blah blah blah).

We’d ask for a track in retaliation from Tyler, but his brilliantly equanimous Twitter response is actually tiding us over. First: “Whoa. I Don’t Think The ‘No Future’ Song Is Even A Diss. But, Ive Never Heard Him Spit Like That. Took Me By Surprise, Cus Its Tight.” Then: “Still Hate That Airplanes Song Tho.”

last night on late night 2:12 a.m.
Amber Ruffin Is Happy to Fact-Check the President All she needs is common sense.
reunions Yesterday at 11:13 p.m.
Veep Cast to Reunite for Joe Biden Fundraiser Former veeps gotta stick together.
mazel tov Yesterday at 7:06 p.m.
Rose Leslie and Kit Harington Are Expecting Their First Child The forecast calls for a little Snow!
coronavirus Yesterday at 4:40 p.m.
Here Are All the Movies Delayed Because of the Coronavirus With updated release dates where available.
live from studio 8h Yesterday at 2:41 p.m.
Lorne Michaels Defends Outsourcing SNL’s Joe Biden Impression to Canada “I’m not turning my back on anyone,” he said about casting Jim Carrey.
the teens Yesterday at 12:32 p.m.
The Riverdale Cast Can Still French, Don’t Worry KJ Apa shared the precautions the show is taking when it comes to make-out scenes.
good golly miss dolly Yesterday at 12:06 p.m.
Dolly Parton Insists Rumors of Her Tattoos Are Greatly Exaggerated, Y’all She has “ribbons and bows and butterflies.” But a full sleeve?
last night on late night Yesterday at 10:58 a.m.
Amber Ruffin’s First Late-Night Monologue Likes You Too “That’s the type of stuff you get to do when you get your own show.”
reunions 9/25/2020 at 9:46 p.m.
Uh Oh, Now You’re Crying at Drew Barrymore’s Reunion With Tom Green In the end, after all this time, it really was the Chad.
casting 9/25/2020 at 8:39 p.m.
Get Ready to Clap for Yara Shahidi’s Tinker Bell in Peter Pan and Wendy She joins Jude Law’s Captain Hook in the upcoming live-action remake.
the simpsons 9/25/2020 at 7:13 p.m.
Better Things Actor Alex Désert Replaces Hank Azaria as Carl on The Simpsons In the show’s upcoming Season 32 premiere.
reunions 9/25/2020 at 6:00 p.m.
Queen of Quarantine Nancy Meyers Is Back with Father of the Bride Part 3 (Ish) The Netflix YouTube event benefits World Central Kitchen
movie review 9/25/2020 at 5:46 p.m.
Ava Didn’t Have to Be a Catastrophe How do you screw up a movie in which Jessica Chastain, Colin Farrell, and John Malkovich face off against each other?
By Bilge Ebiri
this week in late night 9/25/2020 at 5:24 p.m.
Jeff Wright’s Split Personalities Won Late Night This Week Work out with the new Late Night With Seth Meyers writer at your own risk.
the inside track 9/25/2020 at 5:15 p.m.
The Rage of Idles Is Just Another Empty Gesture “War,” which opens their new album Ultra Mono, doesn’t make sense.
theater 9/25/2020 at 5:03 p.m.
At Soho Rep, a Revolutionary Idea: Put the Creative People on Salary The directors feel their job program is more a continuation than a pivot.
follow friday 9/25/2020 at 4:04 p.m.
Sydney Battle Was Bullied Into Making an Insta by Aaron Carter We caught up with the comedian on Instagram Live today.
exclusive 9/25/2020 at 4:02 p.m.
Watch Dolly Parton and Patti LaBelle Turn Their Acrylics Into Instruments In a clip from 1987.
snl 9/25/2020 at 3:20 p.m.
All 45 Seasons of SNL Are Finally Coming to Peacock On October 1, you can binge-watch vintage SNL as much as you want.
overnights 9/25/2020 at 3:10 p.m.
The Great British Baking Show Recap: Keep Calm and Bake a Cake Yes of course everything is terrible, but on the other hand, Battenberg cake!
More Stories