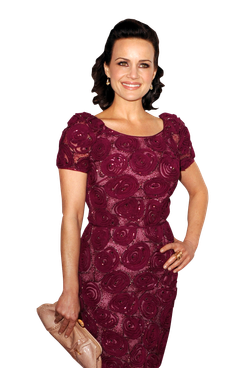 Throughout her 23-year career, the fetching Carla Gugino has played feisty schoolgirl (ALF) and feisty U.S. marshal (Karen Sisco); secret agent (Spy Kids) and Hollywood agent (Entourage); scantily clad parole officer (Sin City) and scantily clad matriarch (Watchmen). Through it all, miraculously, the 39-year-old former model has emerged a respected vamp. (Hey, it helps to have a niche.) Now she’s expanding her résumé of alpha ladies as an ex-porn star in the indie dramedy Elektra Luxx and as a stern therapist in the twisted fantasy Sucker Punch, which opens Friday. Vulture caught up with the gregarious actress and discussed things like villainy, ageism, and IMDb’s woman problem.

It’s interesting that your roles now are more sultry than they were in your modeling days.
I always had challenges when I was younger, because I looked so young but sounded older. Finally, when I hit my thirties, those things came together. The way things manifest is always interesting. I was in the middle of doing Night at the Museum in Vancouver when I got a call from Doug Ellin saying, “Hey, you wanna play this agent on Entourage?” Zack Snyder [director of Watchmen and Sucker Punch] is a big fan of Entourage, so then I ended up meeting him. You never know how the dots connect.

Was Sin City a turning point for you, in terms of being bolder with your sexuality?
I would never have done that if it weren’t for [director] Robert Rodriguez, whom I’d already done three movies with. I felt protected and trusted him. Obviously everyone is self-conscious, but I have a more European aesthetic when it comes to nudity. But for the most part, it was more about the interesting experiment: This is Frank Miller and Robert Rodriguez joining up to do something that is, frame by frame, from the graphic novel. I’ll always take an artistic endeavor over a career move.

Did Zack have to convince you to play a villain in Sucker Punch?
I would actually adore playing a villain! But this character is not really a villain. She represents the establishment; she’s flawed; she’s a woman who’s been repressed; her power has been weakened. And she’s going to have to make some decisions about whether or not to do the right thing. She’s the psychiatrist at the insane asylum, but in this alternate world created by a patient, she is the madame of a brothel. It’s really surreal.

For Elektra: How did you and your boyfriend, Sebastian Gutierrez, who directed the film, land Julianne Moore for a cameo as the Virgin Mary?
We thought, Who would be our ideal Virgin Mary? She couldn’t be too young, but still had to have that untouched beautiful — sort of a placid — quality. And also a sense of comedy. We just asked her, and she said, “I’d love to do it.” She’s really fearless.

Are you returning for that show’s final season?
It could go either way. So I can’t give you that information.

You also got an amazing cast for you and your boyfriend’s other project, Girl Walks Into a Bar, a series of online shorts.
Danny DeVito, Zachary Quinto, Rosario Dawson, Josh Hartnett … I’ve been doing this for so long, so I reached out to a lot of these people. And these are very short time commitments. It’s a ten-act structure: one night, ten bars in Los Angeles. It’s very Altman-esque. This will be the first feature film to premiere on YouTube. I’m intrigued by films that have a singular vision behind them. A lot of studio movies have ten writers by the time they’re done. You have a movie testing 200 times, making adjustments according to various people’s opinions. It’s difficult to have an undistilled vision.

Do you worry about your future now that you’re about to hit 40?
I have a friend who is in her early fifties. She was a very successful actress and consistently played characters ten years younger than she was. Then she said when IMDb came out, all of a sudden people were saying, “Mmmm, you’re too old for that.” But, yes, it’s true in Hollywood: As soon as you hit 35, you start to have those conversations. So I think all we can do is say women only get cooler and sexier and more interesting. Therefore let’s find more opportunities that will represent that. And no one wants to see a bad chick flick. A good movie with women — bring it on.

Carla Gugino on Her ‘Really Surreal’ Sucker Punch Role, and Being a Late-Blooming Sexpot