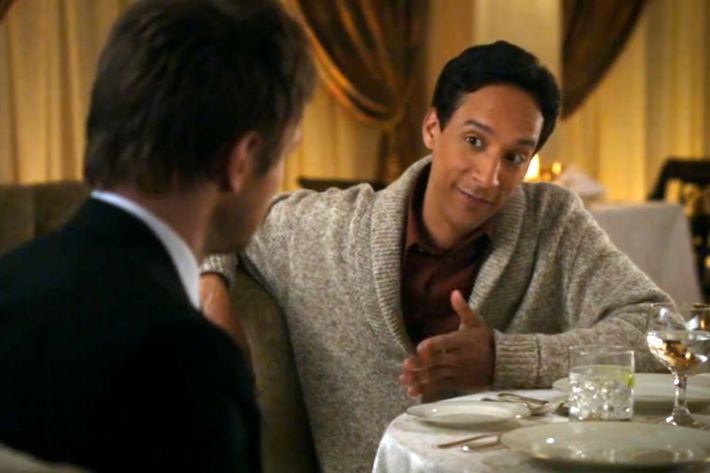 Fellow Human Beings, let’s talk about commitment in comedy, shall we? What does it mean? Well, in more conventional settings — like, say, Cougar Town — it means the willingness to stick with a joke long past the point where a meek audience might have bailed. Think: Andy Kaufman performing Mighty Mouse for the full two minutes. Or, more recently, Zach Galifianakis’s epic SNL monologue. Or that one time on Cougar Town when Courteney Cox necked three glasses of white zin and said something age-inappropriate. (We’re just spitballing here — we’ve never actually seen that show. [Ed note: Just sub in red wine, and example still stands.])

In the warped world of Community, however, commitment has come to mean something else entirely. At Greendale, unlike in the Municipality of Cougar Town (again, we think), big concepts are encouraged, emotional turns are made on a dime, and any broad idea — no matter how wild — is chased after with the gleeful abandon of a puppy in search of a tennis ball (or Troy in search of another glass of fine No-No Juice). Time and time again we’ve marveled at Community’s go-for-broke-ness in episodes about paintball, zombies, and that really weird one about Abed as moviemaking Jesus. “Critical Film Studies” may have lacked the giant set-pieces of the past — the only violence was Troy choking Chang against a jukebox and that was well-deserved — but, in many ways, it was the most daring half-hour the show has attempted yet. It led with a Pulp Fiction parody but was actually a My Dinner With Andre “homage” in disguise. It allowed Abed to change and grow only to show that, no, that’s not really possible. (Or, in Abed’s terminology, it’s not really his “jam.”) It made Jeff vulnerable, but then angry, but then vulnerable again. It put Pierce’s junk dangerously close to a zipper. It was funny, but not out-loud funny. It was a lot to process and, honestly, we’re not sure if we’re scratching our head in delight or despair — or because of the sketchy provenance of the winter hat we’ve been wearing the last few days. But, good or bad, it must be said: This episode was ballsier than a game of bombardment at a Rocky Mountain oyster festival.

To sum up: It’s Abed’s birthday and Jeff has arranged a Tarantino-esque surprise for him. (No, not being shot by a washed-up boxer while you’re in the john — a costume party at the nostalgia diner where Britta works.) Beforehand, they meet at a fancy restaurant where Abed, quite suddenly — and impressively: There was some great work by Danny Pudi here — isn’t Abed anymore. Not only is he wearing an commendably bougie cardigan (quoth Jeff: “I like your sweater. Did it come with a golden retriever?”), he’s also making eye contact, shunning pop-culture references, and ordering squab (they were out of quail) like it’s going out of style (which it did, actually, sometime around 1565). And then something really strange happens: Abed launches into a lengthy, mostly uninterrupted (Jeff can’t hold his snark forever, you know) monologue about a life-changing visit to the set of Cougar Town in which he, Abed, reinvented himself as a normal guy named Chad with a rich, full life of “birthdays, weddings, car crashes, and taxes” and then soiled himself. Abed-as-Chad then encourages Jeff to push past his cynicism and engage in a “real” conversation, which leads to some deep revelations about how Jeff calls sex hotlines impersonating a 400-pound man and pays girls to say they’re still attracted to him (heavy!) and this one time at band camp when Jeff went trick-or-treating as a little “Indian girl” and liked it. Soon, the floodgates are open and Jeff’s blackberry is in his water glass — he’s finally free, to hell with the party. But then the waiter spills it: It was all a performance, an ode to a 30-year-old cult movie starring Wallace Shawn. (Who does Dan Harmon think is watching his show, exactly? The literally nines of people who have the exact same cultural referents as he does? Talk about bold!)

Like fictional phone Jeff, this was weighty, with a lot to unpack. Despite Pudi’s remarkable selling of Abed-as-Chad we were a little on our heels about it while it was happening, mainly because it seemed like an elaborate meta-commentary on the criticism that’s been directed at the character by certain, devastatingly handsome online pundits: That he’s little more than a “robot exchanging catchphrases and references.” And so demonstrating Abed’s substantial ability to change only to double-down on the promise that he can’t actually change was both frustrating and a little cynical. (Abed was right, though, that the other characters around him are changing like the weather in San Francisco: Chang went from a stern, secondary presence to an incredibly annoying prominent baby-man while Britta has gone from “dorkily earnest” to “actively hated by everyone” in record time!) What was gained from this elaborate game of comedy chicken, er, squab? We’re not sure — although we’re certain that Harmon will reference this episode in those to come. His commitment to his ideas tend to play out in season-long arcs, even when they probably shouldn’t (see: Shirley’s Chang baby, but actually please don’t).

But hush. We aren’t hung up on criticisms this morning because we found the dedication to this bizarre premise rather breathtaking. (Kudos also to the presence of Brit-comedy godhead Richard Ayoade behind the camera. He made a mostly still episode feel momentous throughout.) Because after Abed flips the party on Jeff, he flops again: Jeff gets his surprise party surprised right back at him at the fancy restaurant. There is some dirty dancing with Britta while Troy, Annie, and Shirley (who, it must be said, look fantastic in their Pulp get-ups) get to act out some of the more memorable scenes from that “cute” movie they show on airplanes. (You know, the 30-minute one about “group of friends who love cheeseburgers, dancing, and the Bible.”)