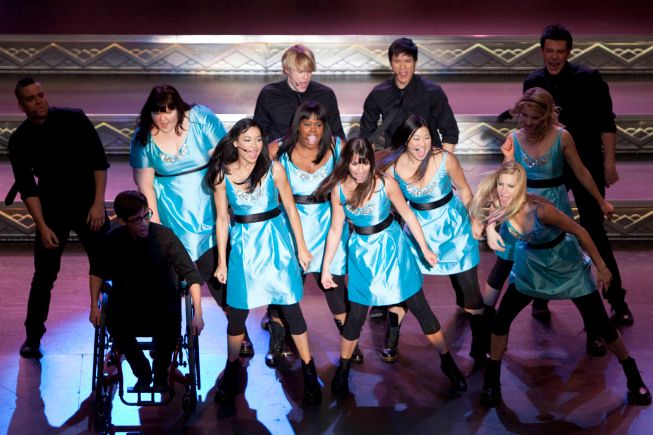 We expected this week’s episode to be rife with bombast and melodrama — after all, it’s written in the Glee rule book somewhere that competition episodes have to involve tons of tears, face contortions, and numerous overwrought speeches, right? So we were surprised to find a moderately paced episode that, despite major and sudden plot developments (Blurt!), seemed to meander along at a decidedly un-Glee-like pace. Sure, Rachel cries and drips mascara onto her pink songwriting journal; Quinn and Rachel have a showdown of sorts on a dark stage; Kurt pensively bedazzles. And amid all of this, major song-and-dance numbers are created, though not before our eyes, as usual. But the reflective mood makes up for the few eye-rolling moments. Perhaps we can thank the untimely death of Pavarotti the canary?

“Misery”
Pizzazz: 6
Relevance: 5
Absurdity: 7
It’s not a Warblers number if it doesn’t involve Blaine throwing huge quantities of paper in the air. Or Blaine leading spontaneous dancing friends through the always-empty rooms of Dalton. After this spontaneous, paper-filled performance (which is frankly pretty winning — what can we say, Darren Criss and white-boy soul go well together), Kurt gets the line we’ve all been waiting for: “Blaine, your solos are breathtaking. They’re also numerous.” And he calls the Warblers “Blaine and the Pips,” which is fabulous on several levels. Still, we’ll let Blaine have his immensely cheesy line, “Hey, regionals — you just met your opening number!” because this is such a monumental improvement over last week’s unfortunate “Animal.”

“Blackbird”
Pizzazz: 2
Relevance: 8
Absurdity: 5
Back at McKinley, the usual happenings are afoot: Rachel’s still deludedly writing bad songs, Finn’s smugly commenting on them, and Quinn is prowling the halls in demurely feminine outfits, speaking in extremely calculated actor-voice about her plan to snag Finn as her ticket to becoming prom queen. Perhaps most important, Sue is up to her old tricks, throwing actual sticks at Mercedes and ruining an awkward, touching moment between Brittany and Santana by calling them “Tweedledum and Tweedle Fake Boobs.” Meanwhile, we’ve noticed Blaine is now making sincere puppy-dog eyes (versus his usual emptily suave kind) at Kurt, especially when Kurt declares, clad in black and a skull sweater clip, that the bird Pavarotti has died under his watch. We’ll give it to Chris Colfer for turning in an adorable performance: “Blackbird” is a great match for his delicate tenor/mezzo-soprano, and the Warblers’s hilarious backup singing entrance relieves any tension from the borderline sappy scene.

“Hell to the No”
Pizzazz: 5
Relevance: 8
Absurdity: 5
And now, for the moment we’ve all been (unconsciously) waiting for: When McKinley Students Try to Write Songs! The first entry, Santana’s ode to Sam’s lips, “Trouty Mouth,” is a great little cabaret number, with such gemlike lines as “You could suck a baby’s head.” Sam’s not having it! Next: Puck, with “Big Ass … Heart,” his latest entry in the mildly-offensive-to-Lauren canon. Mark Salling looks as if he’s about to burst out laughing the whole time, which is enjoyable, and not altogether unbelievable considering lyrics such as “so sick with love I think I’m coming down with rickets.” Finally, Mercedes comes up with a tune that’s at least mildly regionals worthy (and more of a group number than Rachel’s “Get It Right” … but more on that later). While her “Hell to the No” chorus bears more than a passing resemblance to the “off, off, off with your head” chorus of the Yeah Yeah Yeahs “Heads Will Roll,” it’s a typically fierce diva number for Amber Riley, made better by Brittany’s dance moves and awesome floppy hat.

“Candles” and “Raise Your Glass”
Pizzazz: 6
Relevance: 7
Absurdity: 5
We’re happy to say that now that we’ve witnessed a Blaine-Kurt kiss, we’re largely in favor of the Blurt romance. Really, who among us can resist Chris Colfer’s oh-so-realistically agog face when Blaine makes his big confession? (It’s a whole lot better than his often overdone singing faces, for one thing.) Yes, it all seems a wee bit quick and tailor-made for this episode: It wasn’t so long ago that Blaine was explaining to Kurt how misinterpreted his actions were. But at least, in a nod to how things might actually play out in Lima, they’re not totally open in public within two days of getting together. Their duet at regionals is fairly sweet (and a real improvement on the whiny original) and the rollicking Pink number is a total hit, doing some justice to this infectiously catchy, feel-good song.

“Get It Right” and “Loser Like Me”
Pizzazz: 7
Relevance: 9
Absurdity: 6
Just when we thought the endless Rachel-Finn plotline might be over, it looks like things may swing back in that direction. Sigh. At least for now we have a decent showing from Bitchy Quinn and her even more delectable sister, Exasperated Quinn, who gives Rachel a much-needed blunt talking-to in the dim light of the auditorium. We can’t tell if her “you need to get out of Lima — Finn and I never will” talk is a great ruse or her true feelings, but either way, she makes a decent point, one that will inspire Rachel to write a pretty decent ballad. (Sidebar: Why has this girl not sung ANYTHING by Robyn yet? Rachel Berry is the ideal vehicle for, hmmm, all of her songs — “Dancing on My Own”? “Cry When You Get Older”? All very descriptive of Rachel’s life, writers!) Back to the actual plot: Wearing questionable outfits (Doc Martens and aqua taffeta — an interesting choice), the New Directions crew take to the stage — though not for Rachel’s number, which oddly qualifies for regionals despite involving only three actual New Directions members — for a catchy and energetic tune that we can see any of today’s raspier girl pop stars singing. After a scene including pointless cameos from Kathy Griffin and Loretta Divine (“gadabout” Rod, on the other hand, is always welcome), we find out the most un-surprising news on earth: New Directions won! Sue’s upset and punches someone! Kurt’s kinda sad but kinda not, because he has Blaine! And Rachel, crying in a non-annoying manner for perhaps the first time, receives an actual gold star in the form of the New Directions MVP award, gives a touching speech that somehow reminds us of our beloved Sad Glee, even in this winner’s classroom. So, for the moment, yay for everyone — including little dead Pavarotti in his exquisitely bedazzled box.

bullying 12 mins ago
Designer Michael Costello ‘Traumatized’ by Alleged Chrissy Teigen Bullying “She told me that my career was over and that all my doors will be shut from there on. And wow, did she live up to her words.”
the devil you know Yesterday at 11:19 p.m.
Devil Wears Prada Screenwriter Weighs In On Which Character Is Living ‘In Hell’ At least they get to wear Prada while they’re down there?
oh hell yes Yesterday at 9:39 p.m.
Jack Black Is Ice Cube’s Wanna-Be Stepdad In Sony’s Oh Hell No Eh, could do a lot worse.
in the heights Yesterday at 8:45 p.m.
Lin-Manuel Miranda, Jon M. Chu and Film’s Actors Address In the Heights Colorism “In trying to paint a mosaic of this community, we fell short.”
reboots Yesterday at 7:59 p.m.
Robin Thede and London Hughes Are the ‘Perfect Strangers’ for HBO Max Taking you from Mypos to Fort Greene.
the festival circuit Yesterday at 4:53 p.m.
Kendrick Lamar to Perform One (1) Show in 2021 With probably zero (0) new songs.
batman is bad at sex Yesterday at 4:47 p.m.
Batman Can Save Downtown Gotham But Can’t Go Down on Catwoman, DC Says “They’re like, ‘Heroes don’t do that.’”
tv review Yesterday at 4:40 p.m.
Kevin Can F**k Himself Effectively F**ks With TV Convention The Annie Murphy–starring AMC series flips the bird at the trope of the beleaguered sitcom wife and everything she represents.
casting call Yesterday at 3:43 p.m.
Naomi Watts and Bobby Cannavale Will Be Terrorized by the New Jersey Watcher Adapted from us tastemakers at New York Magazine.
superlatives Yesterday at 3:36 p.m.
The Weirdest, Gayest, and Most Unconventional Pop of MARINA “If [I wanted to be more commercial], I would have been by now; I would have specifically chosen to go that way.”
By Wolfgang Ruth
horse girl energy Yesterday at 3:28 p.m.
Watch Megan Hilty Sing About Being a Manic Cartoon Centaur Welcome to Centaurworld.
the festival circuit Yesterday at 3:03 p.m.
Canadian to Headline Made in America Festival Now that’s diplomacy.
bennifer Yesterday at 2:51 p.m.
The Complete 19-Year Timeline of the Bennifer Saga They kissed!
By Zoe Haylock
anniversaries Yesterday at 2:23 p.m.
Spice Girls Are Dropping an Entire EP of ‘Wannabe’ Celebrating 25 years of zigazig-ah.
apologies Yesterday at 2:04 p.m.
Chrissy Teigen Apologizes Again for ‘Asshole Past’ Twitter Bullying “I have so much love to give if you are open and willing to accept it,” she wrote to fans.
iconic Yesterday at 12:07 p.m.
Ziwe Requires No Context Rounding up the most iconic screenshots from the Showtime series.
By Zoe Haylock and Jennifer Zhan
vulture sports Yesterday at 11:21 a.m.
Fancy Guinea Pig Wins Big Dog Show, Teaching You Anything Is Possible Meet Wasabi the Pekingese.
overnights Yesterday at 11:20 a.m.
90 Day Fiancé: Happily Ever After? Recap: Rude Natalie Returns All of the allegations Natalie has made against Trish don’t add up to this kind of treatment.
movie review Yesterday at 11:12 a.m.
The Bleak, Beautiful Holler Marks the Arrival of a Major New Talent Nicole Riegel’s suspenseful Rust Belt drama might seem familiar, but don’t be surprised if it astonishes you.
video nasties Yesterday at 11:00 a.m.
Censor Director Prano Bailey-Bond Is Going to Shock You The first-time filmmaker behind Sundance hit Censor chats with us about Britain’s censorship of video nasties and why we love horror movies.
More Stories