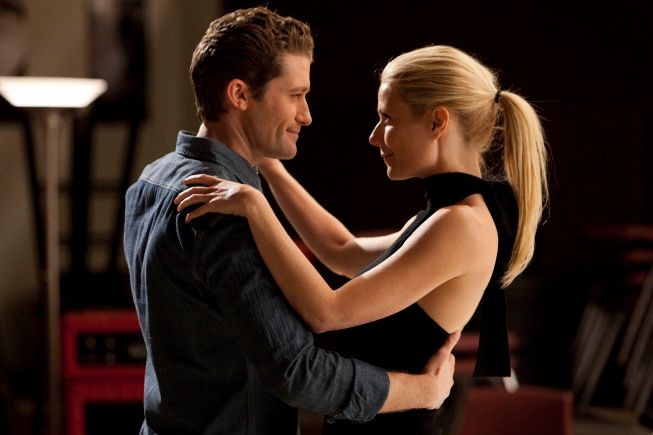 Glee episodes are frequently big ol’ messes of hilarity, ridiculousness, inappropriateness, and sentimentality, which works oddly well for an episode all about sex education — after all, that mix of emotions can pretty accurately describe how plenty of said educational experiences go for teenagers. But on top of that, this week we experienced The Return of Gwyneth, which entertained plenty but somehow made us a little less unabashedly gleeful than her first time around (there’s nothing like your first time  with Gwynnie, that is), perhaps owing in part to the writers overuse of her Hip and With It-isms (“awe-some!”; ”laaaaaame!”; ”hi-larious!”). When Gwyneth wasn’t trotting about being dorkily cute, we got some serious plot developments — Kurt’s sex talk with dad, Santana’s possible coming-out moment — and plenty of varied tunes along the way (though, in an episode about romance, Broadway was egregiously missing).

“Do You Wanna Touch Me”
Pizzazz: 6
Relevance: 8
Absurdity: 8
Holly Holliday is back, no longer teaching Spanish, but still speaking it at random times! Horrified to hear that Finn thinks cucumbers can give you AIDS; that Emma’s as uninformed about sex as her multiple pamphlets are absurd; and that Brittany — adorably and believably — thinks she’s pregnant because a stork has set up shop outside her window (priceless: Rachel’s face upon hearing this), Holly bellows her first “Laaaaaame!” of the episode. Our momentary discomfort at how laaaame the celibacy club is purported to be dissipates at the vision of Gwynnie in Jazzercise wear (we had a Jazzercise birthday party once! It was fun!), and then quickly we’re horrified again as she name-drops Jessica Seinfeld’s book on how to trick kids into eating vegetables. And then it’s time for the Joan Jett cover and bodice-ripping performance we’ve seen no less than eight times already this week (thank you, the Internets). “Too much?” asks Will’s adorably meek little sign. Yeah—it’s a fun number and all, but we’re kinda glad to hear, later in the episode, that, in a rare Glee reality check, McKinley parents did, in fact, complain.

“Animal”
Pizzazz: 5
Relevance: 7
Absurdity: 6
It wouldn’t be a pre-regionals episode without a sabotage-y appearance from Sue, who shows up to teach us that Kurt is now officially answering to the name “Porcelain,” and that she takes her coffee with Sweet N Low, including the packets themselves, and two bottles of simple syrup. She convinces Blaine to sex up the Warblers, which, for His Imperiousness, translates to a warehouse performance for Dalton’s sister school’s girls. Since the show’s thus far pretty much portrayed all the Dalton boys as well-groomed, suave gays like Blaine, it’s difficult to take the girls’ very orchestrated swoons seriously. Though the song choice had potential, the performance falls flat, not least of all owing to Kurt’s, er, unfortunate attempts at sexy singing and sexy face-ing. The arrangement’s a decent one, as we’ve heard on the full version of the track, but the decision to start the song midway through on air is an odd one, and Darren Criss trying to sound like Neon Trees’ singer (a guy trying to sound like Julian Casablancas), well, sorry, Glee: not the Warblers’ finest moment.

“Kiss”
Pizzazz: 8
Relevance: 7
Absurdity: 8
Despite this episode’s troubling whiff of “Emma and Will: Together Again Soon!” we at least got a pleasant peek at what Will romancing another lady would be like, and hey — it was actually fun! Matthew Morrison’s far more charming when giggling like an idiot at Holly’s jokes (she made a sex tape with J.D. Salinger whaaaaaa?!), and, against all odds, we strangely enjoy his “Kiss” as tango idea. The number’s well choreographed, and though we’re at first totally shocked by the sound of Morrison’s falsetto, the harshness wears off to create a nice blend with Gwyneth’s voice.

“Landslide”
Pizzazz: 3
Relevance: 7
Absurdity: 4
We were at first concerned with the fairly flip way this episode treated sexuality — McKinley as weirdly black-and-white world in which teens can only follow Emma’s celibacy-freak path or Holly’s “there’s no day too soon for (protected) sex!” mantra. But, as usual, it’s Mr. Hummel (the great Mike O’Malley) to the rescue, giving a believably uncomfortable Kurt — who’s cool with the idea of sex, just not this very minute — an incredibly touching and appropriate sex talk. And then we have the paradox that is Santana. First, she’s full-on sexually confused, then she’s sure she’s a lesbian — at least when it comes to Brittany. It all involves some serious acting from Naya Rivera, and the Santana/Holly/Brittany trio’s touching, simple performance of the Dixie Chicks’ take on the Stevie Nicks classic conveys Santana’s reflective mood well. But — and we feel awful about it — it’s tough to totally commit to the moment. For the entirety of Glee, we’ve been made to believe Santana’s “lady kisses” with Brittany were largely a titillating joke, lightly based in reality, mostly there to wink at the New Directions boys. The switch to super-serious plot point isn’t unwelcome, but it’s jarring nonetheless.

“Afternoon Delight”
Pizzazz: 6
Relevance: 7
Absurdity: 7
THIS IS WHAT THEY BRING STAMOS BACK FOR?! Okay, breathing and recapping again. By the episode’s end, almost everyone in New Directions has started attending celibacy club (points for Puck’s awesome “consequences” talk with Lauren), except for Quinn and Finn, who are secretly seeing each other again — scandal! In other news, our first view into Emma and Carl’s four-month-long marriage (why, why has this not entered an episode before? And now we have a feeling Stamos is on his way out … ) happens in Holly’s classroom, where Carl keeps hilariously calling her “Doctor” and Emma confesses she may still have feelings for Will (quelle surprise). At least, in this episode’s version of a twist, Will does end up with Holly — which means we have a third installation of Gwyneth to look forward to soon. Maybe now that she has a record deal, we can return to Glee life as usual sometime soon? Next week — ready or not, here come the original songs!

Glee Recap: Too Sexy for This Song