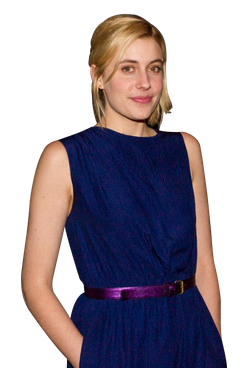 Greta Gerwig stars in two romances this spring: the big-studio-produced Arthur with Russell Brand (out April 8), and Allison Bagnall’s beautifully acted indie The Dish & the Spoon, which just premiered at SXSW. We met up with Gerwig in Austin to talk about the lack of romance in today’s romantic comedies, how she craves the “bigness” of emotion in films like Say Anything, and why Russell Brand could be a cult leader.

It’s so nice to be out of the city, isn’t it?
Yeah. You know, Allison [Bagnall] and her husband have a farm in upstate New York and when we started working together — we were writing something together which wasn’t The Dish & the Spoon — we’d go up there in the morning and work on the farm and write the rest of the day. You don’t get the chance to do that in Chinatown. There’s a bus nearby for gamblers headed to Atlantic City, though.

Is that a new addiction?
Oh, no! But when my friend turned 26 her boyfriend took her to Mohegan Sun and gave her mushrooms. She spent some time lying down on the floor, staring at the carpet, terrified. She was wandering around in the parking lot.

Those carpets are very strange: They’re divided by season.
There’s a weird carpet in one of the big Sacramento multiplexes. It’s all squirrels. It’s sort of an M.C. Escher squirrel carpet. I think that’s one of the benefits of growing up somewhere where there’s nothing cool to do: You notice things like squirrel carpet and you hang out in 24-hour grocery stores. That was what we did. A lot. But that’s not the point of the interview!

Okay, on to the film: You play a distraught woman who’s furious that her husband has cheated on her and then meets this almost magical young man. Your co-star Olly Alexander was an incredible new discovery, and you two really seem to have clicked.
Sometimes when you have chemistry with a person, you have it because there’s this desperation that you want to get something from them — whether it’s sexual or an energy — and Olly and I had an easiness and a desire to be around each other that wasn’t needy. It didn’t have something that felt like it stole power from the other one. It felt very pure. And Alison saw the film as something that was more pure than what you have in adult romance, which is going off and having sex and then trying to figure it out. I can’t — it’s so strange because I have been in movies where there has been very explicit sex, but I think as a person I relate more to childlike crushes. I have a very deep understanding of what that is. And it was great to play it.

It seems like people just jump into bed faster and faster in rom-coms now.
It’s strange. I think sometimes people confuse women’s lib or women being powerful and owning what they are with sexual promiscuity, and it’s interesting how it works in movies: “Yeah, let’s go, fuckbuddy, I don’t care … ” I don’t think it’s true of men, really. I mean, maybe it’s true of us all at some point or another, but I don’t really think that’s most people’s deepest truth.

But there’s this huge boom of films about women who are just as sexually aggressive as the men now, right?
I was in one! And I loved doing it. I have walked down that road — but you know, I thought about the last movie that just truly made my heart jump out of my chest and make me feel so in love with love and characters — it was Brokeback Mountain, to be honest. It was unabashed. He takes that shirt out at the end, and says, “Jack, I swear … ” It’s so big! It’s romance and I don’t think I’ve seen anything that pure in a long time. I want that romance from the movies. I’m all for the banalities of life and humiliation and everyday tragedies, but I also think people have big moments and they have bigness in them. And they want to see that bignesss. I want to see it.

Has that been on your mind a lot lately?
Well, I made a Pandora radio station out of “Africa” by Toto. Which turns out is the best radio station in the world, because it’s a lot of Don Henley “Boys of Summer” — a lot of stuff that’s epic and unapologetic and totally synthed out. I find it all very moving. And of course, “In Your Eyes” played and I felt like I had to watch Say Anything right now. But it wasn’t on Netflix Instant, so I found it broken up into ten parts on Spanish Yahoo. I guess that’s sort of where I am right now.

And your next romance is with Russell Brand in Arthur. Did you two improvise off each other?
Russell’s always improvising, and I don’t mean this disparagingly at all. He’s always performing. It’s like he’s reading words off a screen in his mind. I got used to it — but not totally. I had this feeling that when he paid attention to you and put his attention on you, the sun was shining on you and it was so warm and good. And then he’d take it away and you’d just want it back again. And I think he really did have that effect on everyone around him, which is why I’ve always said he could be a cult or religious leader.

Greta Gerwig on Russell Brand, What’s Wrong With Romantic Comedies, and How to Build the Perfect Pandora Station

movies 2:02 a.m.
Transformers to Roll Out Rise of the Beasts The seventh installment of the franchise.
covers Yesterday at 6:39 p.m.
Miley Cyrus and 52 Other Artists Cover Metallica on The Metallica Blacklist Listen to her rendition of “Nothing Else Matters,” featuring Elton John, Yo-Yo Ma, and — somehow — more.
department of jost-ice Yesterday at 5:31 p.m.
Disgruntled SNL Viewer Tried to Get the Department of Justice to Shut It Down Jimmy Kimmel Live, too.
vulture recommends Yesterday at 5:07 p.m.
For Heaven’s Sake Makes True Crime Feel Cozy The Paramount+ docuseries is downright heartwarming.
mayoral race Yesterday at 4:12 p.m.
How Every NYC TV Character Would Vote in the New York City Mayor’s Race We’ve taken a peek inside the minds of television’s most famous New Yorkers to see who they’re ranking No. 1.
By Nate Jones
streamliner Yesterday at 4:00 p.m.
Peaky Streamers: A Guide to the Best Services for British Movies and TV Acorn, BritBox, and plenty of other places for Anglophiles to get their fill.
trailer mix Yesterday at 3:41 p.m.
Suicide Squad Trailer: Harley Quinn and Friends Embark on ‘Operation Butthole’ James Gunn’s supervillain meetup is out on August 6.
renewals Yesterday at 3:30 p.m.
Make It Clap for Ziwe Season Two She’s in her empire-building era.
house tours Yesterday at 3:11 p.m.
Tour Cara Delevingne’s Willy Wonka Sex Factory of a Home Come, come through the vagina tunnel.
a long talk Yesterday at 2:16 p.m.
Elisabeth Moss on Tackling The Handmaid’s Tale From Both Sides of the Camera “I’ve always thought, in a way, that is actually the way a director thinks. I just never realized it.”
#freebritney Yesterday at 2:10 p.m.
Britney Spears Alleges She Was Forced to Perform While Sick, Wants Jamie Out She called it one of the scariest moments of her life.
vulture lists Yesterday at 1:56 p.m.
11 Noteworthy Documentaries Celebrating LGBTQ+ Women From 1920s lesbians appreciating art in Paris to a retired Illinois couple coming out after six decades together.
music videos Yesterday at 1:21 p.m.
Lose Yourself in Tyler, the Creator’s ‘Wus Ya Name’ Music Video The latest from his upcoming album Call Me If You Get Lost.
the law Yesterday at 12:44 p.m.
Allison Mack Provided Audio of Keith Raniere Planning NXIVM Branding Ceremony Prosecutors have requested a lighter sentence for the Smallville actress, citing her assistance in providing evidence about the cult leader.
casting call Yesterday at 12:41 p.m.
Heigh-Ho, Heigh-Ho, It’s Off to the Live-Action Snow White Rachel Zegler Goes And we haven’t even seen her in West Side Story yet.
not this.... not this. Yesterday at 11:52 a.m.
Karen Trailer: Absolutely Not QAnon fan Taryn Manning not understanding the assignment? Shocker.
burn out Yesterday at 11:38 a.m.
Sarah Paulson Says Filming Roanoke Was Her Personal American Horror Story “I just don’t care about this season at all …”
hot pod Yesterday at 11:10 a.m.
Pineapple Street’s The 11th Aims to Break Podcasts The new series will be released in a different shape once a month.
trailer mix Yesterday at 11:00 a.m.
Only Murders in the Building Trailer: Selena Gomez Forms a Crime Co-op Board Steve Martin and Martin Short are happy to help.
trailer mix Yesterday at 11:00 a.m.
Tim Robinson’s ITYSL Season-Two Trailer Is Turbo-Time Overdrive Featuring Bob Odenkirk and now powered by Corncob TV.
More Stories