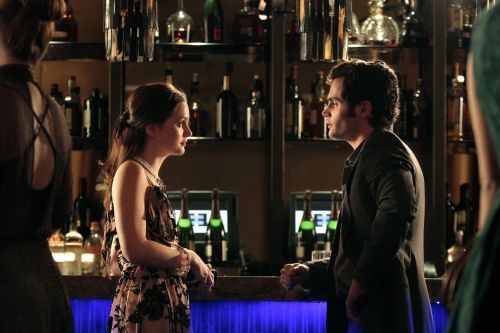 One of the most common complaints about Gossip Girl — and, in fact, just about every hot television show that features adults pretending to be teenagers — is that the writers pair off the main characters in every possible love permutation available to them. Because they’re only dealing with a finite number of primary cast members, if a show lasts more than a couple of years, eventually everyone will have dated everyone else.

The writers of Gossip Girl swiftly exhausted most pairings in the first few seasons: Blair and Nate, Nate and Serena, Serena and Dan, Dan and Vanessa, Vanessa and Nate, Nate and Jenny, Jenny and Chuck, and most important, Chuck and Blair. Oftentimes these matches were so rushed that they seemed laughable — Jenny used to hate Chuck because he tried to rape her in the first episode, and then she offered up her virginity to him? And what, exactly, were Vanessa and Nate supposed to have in common?

Left out of that sexual daisy chain for the first three seasons was a love match between Blair and Dan. The circumstances seemed to preclude such a pairing: Even though Dan’s father married into the life of a billionaire house-husband, the Upper East Side crew always viewed him as “Lonelyboy,” the outsider. And Blair has basically been preoccupied with Chuck for several years now. It almost felt like the writers were being respectful of viewers’ credulity by not even going near that situation.

And then the last episode before the hiatus happened. Dan and Blair, in the very last moment of the show, exchanged a fierce kiss. What was strange about it was that it felt, well, right. Somehow, over the course of several episodes, the writers had built a plotline that made the most unbelievable possible pairing on the show (well, other than Dorota and Eric) believable. The key to this feat was the “over the course of several episodes” part. Gossip Girl often suffers from ADD when it comes to characters and plotlines. A life-threatening story line could come up in one episode and be gone the next. But in the fourth season, the driving plots (that Lily put Ben in jail to protect her daughter, that Bass Industries is in trouble) have remained in steady arcs since the very first episodes. By allowing sprouts of story to spring naturally from these roots, even though the lovable ridiculousness of the show never stopped, the frustrating schizophrenia almost completely did.

Sure, viewers knew what the writers were up to when they started having Dan and Blair hang out (and, that they won’t necessarily be hanging out for long). But it was believable in the way it happened — they are the two smartest and best-educated characters on the show. They’re the most snobby, really, at least when it comes to art, literature, and film. And like everyone else, they’re impossibly attractive. Since they live in a world where both only seem to have half a dozen real friends (if that), is it so crazy they’d end up together? Until two months ago, the answer to that question would have been yes. Not so any longer.