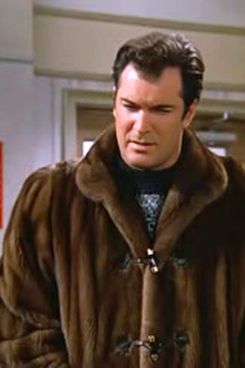 We may finally be moving into spring, yet despite of the incoming warm weather, TV is entering a season of toasty man-furs. The upcoming wave of medieval dramas, fantasies, and historic soaps — HBO’s Game of Thrones (due mid-April), Showtime’s The Borgias (starting Sunday), Starz’s Camelot (premiering Friday) — brings British accents, swordfights, darkly-lit scheming and murder. And in these shows’ settings, the correct attire for such behavior requires mounds and mounds of fur pelts or, at the very least, a gaudy animal fringe. Though in the history of movies and TV, the manly donning of a fine mink or fur has hardly been relegated to ye olde days: Through the years, many actors who believe that building a role starts with the clothing have tossed PETA’s latest newsletter out the window to bedeck their current-day characters in animal hides as a furry grace note. Join us as we revisit some of our favorites through the years.