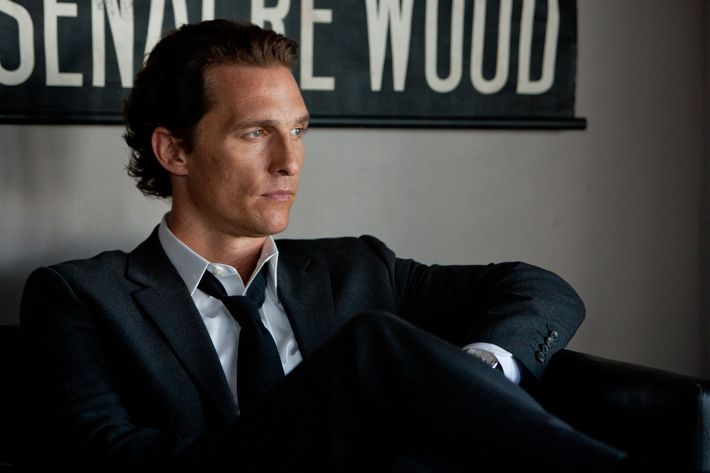 After a decade of playing bongos, bantering with Kate Hudson, and taking off his shirt, Matthew McConaughey finally went and made a serious movie, The Lincoln Lawyer. And, holy surfer dude, critics seem to think he’s pretty good in it! So long as this doesn’t mean we’ll shortly be out of McConaughey-filled mediocre romantic comedies to stream on Netflix, we’re in favor of this development. (Ha, who are we kidding? There are so many, we’ll never run out of those.) That said, we have to admit there’s something deflating about McConaughey’s attempt to go serious — really, can no one be content making millions of dollars and hanging out on the beach if they’re not doing “important work”? Is an easy life doing nothing in paradise a hollow dream? Let’s step away from these heady existential questions, and move on to the reviews!

“Lincoln’s saving grace is the way McConaughey manages to be magnetic against all odds. In Mick, there is a maturity not seen in his other work, a more nuanced performance as the actor exposes the uncertainty inside the smooth sarcasm, the decency behind the grifter’s smile. If only we could have seen more of that, even with his shirt on.” —LAT

“What happened — did Matthew McConaughey roll out of bed one morning and decide that, after smiling through one too many schlocky movies, playing the pretty boy opposite Sandra-Kate-Jennifer, he wanted to do something decent? Not great, mind you, just solid and satisfying.”— NYT

“Best of all, a dynamite Matthew McConaughey gives his best performance in years as Mick, wearing the character like a second skin.” —Rolling Stone

“Since McConaughey has spent much of his recent career languishing in silly rom-coms, it’s easy to forget that he lit up a courtroom in 1996’s A Time to Kill. That swagger, that rakish smile and that offhand drawl convincingly power McConaughey’s portrayal of this slick legal hustler.” — USA

“But this is a leaner, meaner McConaughey now, and The Lincoln Lawyer allows him to bridge charm and smarm and come up with a character that’s still cocky but also sympathetic.”— Detroit News

“Matthew McConaughey keeps his shirt on and shows he can actually act when he feels like it as Mick Haller, a smooth- talking, scruples-free criminal lawyer who makes a handsome living defending the scum of Los Angeles out of the back of his limousine.” — NYP

“Fueled by a bravura, career-reshaping lead performance from Matthew McConaughey and the stylish, assured direction of Brad Furman (whose only previous feature is “The Take”), “The Lincoln Lawyer” turns Michael Connelly’s best-selling novel into a gritty, gripping L.A. noir, heir to the spirit of Raymond Chandler, “The Rockford Files” and “Jackie Brown.” — Salon

“Matthew McConaughey has over the years gone from an actor most everyone enjoyed seeing in films like “Dazed and Confused” and “A Time to Kill” to a guy who takes his shirt off in bad romantic comedies like “Fool’s Gold.”In “The Lincoln Lawyer,” McConaughey once again takes off his shirt, but only for a minute. I’m happy to report that he spends most of his time acting, while clothed… It’s encouraging to see McConaughey interact with other characters instead of just his abs. He is an entertaining actor, or can be. He is here, when the story doesn’t get in the way.” — AZ Central

Matthew McConaughey Gets Well Reviewed in The Lincoln Lawyer