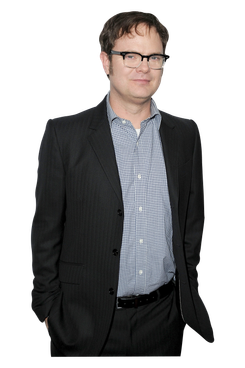 Rainn Wilson describes his dark new comedy Super thusly: “A 40-year-old sad sack hits bottom, begs God to give him his wife back, then goes on a mission. And even though he’s kind of a psychopath, he makes the world a better place.” We sat down with Wilson, best known for his turn as super-nerd beet farmer Dwight on The Office, and got his thoughts on Steve Carell’s departure from the show, the downfall of superhero movies, and the pluses and minuses of being a not-conventionally-good-looking actor.

I bet people are asking you what kind of superpowers you’d want in real life.
How can I express my disgust and disdain for that question? When I did that piece of dog doo-doo called My Super Ex-Girlfriend six years ago, every interview was, “What power would you have as a superhero?” It’s my least favorite question.

I think candor is a superpower.
If someone asks me again, I’ll say: “I’m Candor Man. I speak the truth. And that is a stupid fucking question.” I mean, what do you say? “Oh … the ability to be invisible so I can go into people’s bedrooms and hear what they’re saying?” Then it would say on the blog, “Rainn Wilson: Voyeur?” Besides, Super really isn’t a superhero movie. There are no actual superpowers. It’s just a guy with a wrench. It’s a hero’s journey, a spiritual quest.

Do you think that will be obscured by the fact that it really looks like a superhero movie, full of superhero catchphrases and close-ups of Ellen Page’s body in a tight superhero costume?
I think it will. It’s a big issue. I think the film works on many levels, though: It’s a great action movie. It’s a great fucked-up comedy. But it also runs much deeper.

Were you hoping it would transcend the cheesiness and overdone-ness of the superhero film genre?
Absolutely. Superheroes, for our culture, are what the gods were for the ancient Greeks. A lot of comic books are full of depth and sadness, with those frames of the hero looking forlornly in the moonlight, cast out from society. But superhero movies are just a lot of explosions and costumes and catchphrases in an air-conditioned theater. They don’t dig into that stuff. That’s why The Dark Knight was so successful, because it brought out the underbelly of the hero story. So few even try. I describe Super as a fucked-up, raw version of Watchmen. A lot of people are going to hate this movie. But I like that.

It’s also drawing a lot of comparisons to Kick-Ass and Defendor.
I purposely didn’t watch either of those films. James Gunn wrote the script before those films were written. And I also think that from what I’ve seen, and what I’ve heard, ours has some real teeth to it, has some darkness to it.

It’s a fairly subversive film and not always comedic. Do you think you’ll start going after different kinds of roles?
A lot of the studio comedies are not funny. Not that my door is getting knocked on a lot to make studio comedies. I just want roles that are interesting to me. And if that involves falling down the stairs naked, great. And if that’s playing a bereaved, pill-popping dad, like in Hesher, so be it. I was a theater actor before I did any film or TV, and in theater you don’t get typecast: You audition, and unless they’re gonna cast Andrew McCarthy, they cast the best actor for the part.

So certain things matter less?
I’m odd-looking but I’m happy with it. I like playing weird parts and —

Good-looking people usually don’t get those.
Right. I used to be much more thin-skinned about it. I was doing a play about thirteen years ago and I was napping on a cot during a break and my eyes accidentally just fell on a negative review of the play that implied I wasn’t good-looking. And that evening I performed like I had a knife sticking out of my gut.

Do you think being famous could be viewed as a superpower?
George Clooney once said, “No one ever wants to hear a celebrity complain about anything.” Being a celebrity gives me so much, but it’s also a very weird drug. I go out in public and there’s this frenzy. People scream. But why? I’m an actor who plays an annoying beet farmer on a TV show. I’m a guy living in the suburbs, playing Xbox and reading books. It is nice to be recognized for my work, though — when I was doing theater no one ever recognized me once and it sucked.

How do you feel about Steve Carell leaving The Office?
It was hard to make comedy during his last week. On his last day I gave him a hug and it was very tearful. It’s not like we’re besty-best friends hanging out all the time, but it’s an incredible loss. That said, we’re 148 episodes in, and the show needs some reinvention. Most likely it’s the show’s downfall, though. I’d say 85 percent downfall, 15 percent brilliant re-creation.

Do you secretly want it to be the show’s downfall? Are you sick of being a beet farmer?
I would not object. I’m ready, willing, and able to move on. I’d like to go back to theater. Theater is fucking hard and time-consuming, and there’s not enough time while doing The Office to rehearse and run a play.

So you don’t really care about people fawning over you?
I don’t need that. But I don’t know how to say that and not sound like a douchebag.

Rainn Wilson on Super and The Office Without Steve Carell