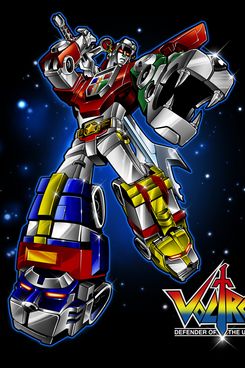 Attention, robot nostalgists: Your dreams of a big-screen adaptation of the 1984 animated series Voltron: Defender of the Universe are one step closer to becoming CGI reality! Vulture hears that a bidding war has broken out to finance a Transformers-size blockbuster retelling of the legend of the iconic robotic lions and their human pilots; Ryan Kavanaugh’s deep-pocketed Relativity Media is one of the very interested parties trying to sell itself to World Events Productions, the St. Louis–based company behind the original show.

Atlas Entertainment producers Charles Roven (The Dark Knight Rises) and Richard Suckle had been developing a script with screenwriters Thomas Donnelly and Joshua Oppenheimer (who wrote the upcoming Conan the Barbarian reboot), and concept art had leaked last fall. But considering how long this project has been rumored, rudimentary-anime fetishists dared not raise their hopes. Now, news of the eager big-money suitors means this could finally actually happen. Considering the show became an international pop-culture hit at the beginning of the second Reagan administration, one has to ask, “What took so long?”

The answer lies in the show’s mongrel beginnings. Its creator, Peter Keefe (who sadly didn’t live long enough to see his creation reach Tinseltown), concocted the syndicated TV series as an ersatz mixtape, splicing together footage from two esoteric and totally unrelated Japanese anime series. By editing out the Japanese dialogue, music, and seemingly ubiquitous beheadings and disembowelments, Keefe was able to get the show to comply with U.S. broadcast standards, and it became a totally unqualified — and unexpected — global hit.

In 2000, Koplar finally acquired the full rights to Voltron from Toei, freeing him up to develop a TV series. But big-screen producers were also interested: Mark Gordon, the producer of Grey’s Anatomy, developed it as a feature film from 2005 to 2007, setting it up at the 20th Century Fox–based New Regency with backing from Relativity Media. However, that deal fell apart amid new legal challenges from Toei, which insisted the previous TV agreements did not include movies.

However, that discrepancy was finally worked out, and now World Events has both a Voltron TV series and a feature film in the works: Voltron Force will air on the Viacom-owned Nicktoons channel this May.

World Events executive VP Robert Koplar (son of Ted) declined to comment on whether Relativity Media would release the Voltron film itself (entirely possible, given its absorption of two-thirds of the staff of Overture Films last year) or if World Events’s recent deal with Viacom’s Nicktoons means that sister company Paramount Pictures could handle it, but he did note that development is proceeding apace, and that regardless, the film will likely be ready to hit theaters by 2013 or by 2014 at the latest — just in time for its 30th birthday.

streamliner 16 mins ago
How to Download Shows and Movies on Your Favorite Streaming Services Your ultimate guide to the ins and outs of offline viewing.
rolling loud 2021 2:40 p.m.
DaBaby Brought Tory Lanez Onstage at Rolling Loud The rapper apologizes for homophobic remarks after being dropped from several festival appearances.
coming soon 2:30 p.m.
Amazon’s Big Expensive LOTR Series Will Finally Premiere September 2022 Filming has wrapped in New Zealand.
overnights 2:02 p.m.
90 Day Fiancé: Happily Ever After? Recap: There’s No Fun Fake Version Why is Jovi blowing kisses to strippers? Is he practicing kissing his marriage goodbye?
deals 1:53 p.m.
Travis Scott Gets Into Business With A24 Cactus Jack Films and A24 begin their partnership with Utopia.
the chungle is murder 1:47 p.m.
What the Hallöchen Are We to Make of Jesse Plemons’s Jungle Cruise Accent? “The chongle is murder.”
trailer mix 1:28 p.m.
Together Should Be Called The House That Was Full of Accents James McAvoy and Sharon Horgan in a pandemic rom-com? We’re all the way in.
the festival circuit 1:00 p.m.
DaBaby Pulled From Lollapalooza Lineup After Homophobic Comments Hours after being dropped from Governors Ball, DaBaby is also no longer playing Day N Vegas.
casting couch 12:46 p.m.
Chloe Fineman, Jeff Garlin to Get Serious for Damien Chazelle’s Babylon They join the stacked cast of his period piece about Hollywood’s Golden Age.
lollapalooza 12:37 p.m.
Limp Bizkit Brings Woodstock ’99 to Lollapalooza Introducing “Dad Vibes.”
renewals 11:55 a.m.
The Chi Will Answer All Your Finale Questions With a Fifth Season Lena Waithe cannot be stopped.
coachella 11:07 a.m.
Frank Ocean to Headline Coachella 2023 The festival’s co-founder Paul Tollett confirmed the news in an exclusive interview with the Los Angeles Times.
venom 10:20 a.m.
The Weeknd Quits Hard Drugs, Presumably Can Feel His Face Ladies and gentlemen, the Weeknd.
last night on late night 10:04 a.m.
John Oliver Couldn’t Help But Wonder, Is the Sex and the City Reboot Pure Trash? “What are you thinking? It’s never gonna work without Kim Cattrall.”
trailer mix 10:00 a.m.
Tom Hardy and Parasite Meet Woody Harrelson and Wig in the Venom 2 Trailer The human-parasite buddy-comedy sequel premieres September 24.
vulture sports! 9:50 a.m.
Simone Biles Is Planning to Compete on Balance Beam Tuesday The GOAT’s last chance at gold at the Tokyo Olympic Games.
health 9:39 a.m.
Kathy Griffin Has Lung Cancer, Will Undergo Removal Surgery “The doctors are very optimistic,” she wrote on Twitter.
tokyo olympics 2021 9:36 a.m.
A Day-by-Day Schedule of the 2021 Tokyo Olympics Let the games begin …
best of 2021 9:00 a.m.
The Best TV of 2021 (So Far) We survey the high points of a sprawling television landscape, from lush cinematic dramas to fleet streaming comedies and all points in between.
By Jen Chaney, Kathryn VanArendonk, and Matt Zoller Seitz
profile 8:00 a.m.
Anthony Veasna So Knew He Was a Star When the author died at 28, he was on the cusp of literary fame. Who was he?
By E. Alex Jung
More Stories