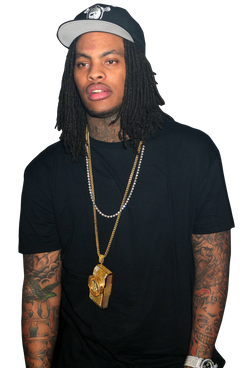 The Atlanta rapper Waka Flocka Flame was asked about his lyrical style in a radio interview last year. “It ain’t got nothing to do with lyrics,” Waka said. “I ain’t got no lyrics.” What it does have to do with, though, is making money: So far Waka’s blunt, ridiculous flow has landed him the hits “O Let’s Do It,” “Hard in da Paint,” and “No Hands,” which is currently at No. 4 on the Billboard rap chart. (He’s also broken through in other realms: As of yesterday, you can see him posing in his altogether for PETA). Waka spoke with Vulture about his Muppet chain, his anti-lyrics, and using his heart instead of his brain.

Some people criticized you for saying, “I ain’t got no lyrics.” What did you mean by that?
I didn’t get into rap to be no lyrical genius. I got into rap to feed my family and help the people in need around me, that’s it. A lot of people say, “Man, Waka Flocka ain’t go no lyrics,” so I was like, “Yeah, you right!”

Do you think lyricism and the ability to sell records are separate skills?
It’s a total big difference between a person that got lyrics and a person that can make hit singles. I’m a person that can make some hit singles. I’m not in no booth trying to be a lyrical genius. I’m preparing to make me some singles, and as I develop as a man, then they’ll respect my emcee skills. You see a lot of people that can only make hit singles, but on the microphone, on some antique rapping style, they don’t know how to withstand. That’s what they call a one-hit wonder.

There’s an obsession with rappers being “real.” Do you think what you do in real life is relevant, or should the music stand on its own?
The answer is yes and no. First of all, hip-hop is called entertainment. You’re supposed to entertain people. Everything you see ain’t real. Now, when you rapping about something and trying to act like it? That’s when you fake. That’s what you call a fake person.

You wear a lot of green. Sometimes you throw gang signs in videos. Is that real, or is that an image you try to project?
I don’t project no image. I just act like myself. I write about how I feel, the emotional stage I’m in at the time. So I write from the heart. I never write from my mind. My brain, I mean.

You have said you were writing from the heart when you made the song “Fuck This Industry,” in which you rapped, “Fuck this industry / I mean that shit, dawg / Waka Flocka Flame / Man, I want it all.” But hasn’t the industry been good to you?
The industry has been, but the people who’s inside of it, no. A lot of people say hip-hop be dead — hip-hop is not dead. But the people who handle the business, the greed, that can bring a person’s career down. People start to feel like, “Damn — I’m just making music so another person can get rich?”

Do you really wear a diamond-encrusted Fozzie Bear chain?
That’s Fozzie, man. That’s my boy who be saying “waka, waka, waka.” I had to get that.

How did “Waka” come to be part of your name?
My original name was Juaquin, and my cousin couldn’t pronounce my name right. So he’d just be saying “Waka! Waka!” So when I was younger I used to always laugh, then my man Gucci gave me the rest of the name.

Who are your favorite rappers?
Tupac is my favorite emcee. Nas. Eazy-E. That’s my top three right there.

Tupac was a published poet. Do you consider yourself a poet?
Not as of right now I don’t. No, I don’t see that.

In Jay-Z’s song “Ignorant Shit,” he seems to imply that he’s dumbed down his lyrics for the sake of his fans. Does that resonate with you?
I didn’t even listen to that. You just threw me off.

Do you listen to Jay-Z?
Oh, yeah, I love Jay-Z music. That’s my fourth-favorite emcee. But I’ll tell you — you have to keep on doing what the fans love you for. When they call for a change, that’s when you change. You’re not rapping for yourself; you’re rapping for the fans. If the fans stop messing with you, you ain’t got no career.

extremely offline 1:14 a.m.
Famous Non-Asshole Alec Baldwin Quits Twitter Again, Says It’s For Assholes Consider the source.
overnights Yesterday at 11:00 p.m.
Good Trouble Recap: Art Breaker It’s nice to see Gael getting a good story that doesn’t have anything to do with Callie.
overnights Yesterday at 10:30 p.m.
The Real Housewives of New Jersey Recap: Blow a Casket This Jackie-Teresa situation is what happens when an unstoppable force meets an uncomprehending object.
late night tv Yesterday at 9:00 p.m.
Fallon Takes a WandaVision Trip Through Late-Night History With Elizabeth Olsen Apparently Wanda isn’t the only person who turns to old TV as a coping mechanism.
operation varsity blues Yesterday at 8:42 p.m.
Lori Loughlin Spotted Sporting Varsity Blue in First Post-Prison Sighting She served two months for her role in the high-profile college-admissions scandal.
rent! rent! rent! Yesterday at 7:30 p.m.
The Highs and Lows of NYTW’s 25 Years of Rent Benefit A reunion special with extra new stars, as the 1996 musical reaches a milestone birthday.
the gold rush Yesterday at 6:03 p.m.
SAG Awards to Spare Us Another Live-Awards-Show Nightmare The executive producers announced today the awards would be an hour-long pretaped show.
trailer mix Yesterday at 5:49 p.m.
Get Super-Stoked for Octavia Spencer and Melissa McCarthy Thunder Force Trailer ’Jason Bateman is a crab-person’ celebrity conspiracy theory CONFIRMED.
the coronavirus Yesterday at 4:47 p.m.
Smaller New York Performance Spaces Allowed to Open at Limited Capacity Venues would max out at 100 people indoors or 200 outdoors.
the gold rush Yesterday at 4:39 p.m.
How Likely Are Golden Globe Winners to Win Oscars Anyway? We crunched the numbers and did the math, and the results are in.
tea-mz Yesterday at 4:33 p.m.
Watching YouTube Through My Daughter’s Eyes Anna Oop teaches her about the latest TikTok drama, and me about my child.
stand-up Yesterday at 3:47 p.m.
James Acaster Is More Personal Than Ever in His New Comedy Special You would too if your girlfriend left you for Mr. Bean.
makes me wonder Yesterday at 3:37 p.m.
Adam Levine, Lead Singer of a Band, Feels Like ‘There Aren’t Any Bands Anymore’ Meanwhile, his band just released a new song with Megan Thee Stallion.
1.5x speed Yesterday at 3:21 p.m.
Dead Pilots Society, Stolen, and 2 More Podcasts Worth Trying Plus, a check-in on Obama and the Boss.
movie review Yesterday at 2:31 p.m.
The Truffle Hunters Heads for the Hills and Returns With a Feast for the Senses Escape into a modern-day past with this documentary about Italian truffle foragers.
respect the classics Yesterday at 2:18 p.m.
Why, Yes, David Crosby’s Threesomes Would Include Men “I certainly wasn’t the only one doing it. It was fun to adventure back then.”
renewals Yesterday at 12:55 p.m.
The Simpsons Will Outlive Us All Fox has renewed the long-running series for seasons 33 and 34.
tea-mz Yesterday at 12:44 p.m.
The Receipt-Keeper of YouTube D’Angelo Wallace is the foremost chronicler of online celebrity. Now he is achieving fame in his own right.
By Madison Malone Kircher
log off Yesterday at 12:40 p.m.
Kelly Marie Tran Is ‘So Much Happier’ Off Social Media The Raya and the Last Dragon star on reigniting her “fire” offline after Star Wars.
video games Yesterday at 12:27 p.m.
Hogwarts Legacy Can’t Escape J.K. Rowling Adding a trans-inclusive character creator doesn’t make up for the author’s transphobia.
More Stories