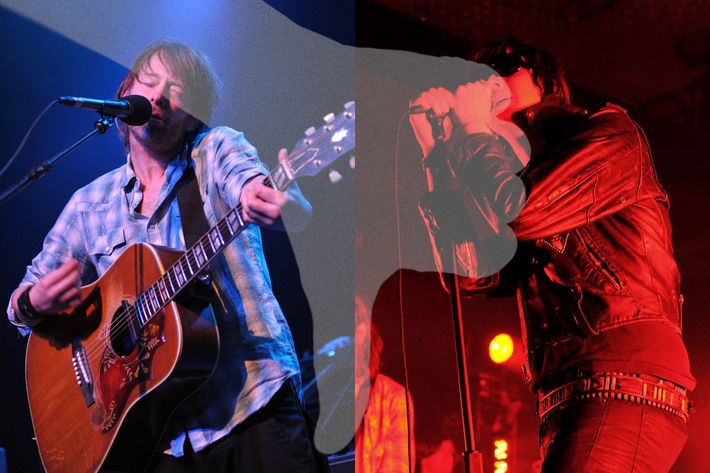 You owned the posters. You saw all the shows. You bought the deluxe editions, because you cared that much. And now, the band that used to be your favorite has put out a new album — potentially Radiohead’s The King of Limbs or Angles by the Strokes — and you shrug your shoulders. (Or worse: You haven’t even downloaded it yet!) Falling out of love with your favorite band can happen to all of us, but we want to know when it happened to you. Is there an album you can point to as the moment it all went sour, or did you come to the gradual realization that you and that band you’d worshipped were simply growing apart?

When Did You Stop Loving Your Favorite Band?

now streaming 5:00 p.m.
New on Netflix: June 2020 Spike Lee’s Da 5 Bloods, Lady Bird, Twister, and more.
splits 4:58 p.m.
Thomas Middleditch and His Wife Go From Swingin’ Open Marriage to Divorce They were married for four years.
ugh 3:17 p.m.
Jake Paul Insists He Didn’t Participate in the Looting He Filmed Paul and his friends posted videos from inside an Arizona mall.
overnights 3:00 p.m.
Space Force Recap: The Wrong Stuff Angela Ali takes her moment, China makes a power play, and Erin spirals out.
black lives matter 2:11 p.m.
Ariana Grande, Halsey, and More Celebrities Spent Their Weekends Protesting From all over the country.
coronavirus 1:00 p.m.
All the Live Events, Movie Releases, and Productions Affected by the Coronavirus A long list of broken dreams.
our country 12:14 p.m.
Don Lemon Calls Out Friends for ‘Sitting in Your Mansions’ and Ignoring Protests “Have some moral courage and stop worrying about your reputation and your brand.”
bachelor nation 10:47 a.m.
Hannah Brown Issues Apology: She’s Not ‘Ignorant White Girl Who Uses the N-Word’ “If you want to support me, do not defend me. What I did, what I said was indefensible.”
overnights 8:00 a.m.
Space Force Recap: Orange Is the New Blah Pick a lane, Space Force, or people are going to pick another show.
george floyd Yesterday at 11:19 p.m.
Police Hit Insecure Actor Kendrick Sampson With Rubber Bullets at L.A. Protest Police also hit him with a baton.
overnights Yesterday at 10:00 p.m.
Space Force Recap: Skinny Fuel An old-fashioned “special guest star” episode is pretty thin overall but features some great work from Kaitlin Olson and Janina Gavankar.
protests Yesterday at 8:39 p.m.
Killer Mike Addresses Atlanta Protesters in Emotional Speech He urged protestors to “go home.”
auteur theory Yesterday at 4:27 p.m.
David Lynch Is Basically Ron Swanson Now He got his swing-out urinal just right.
overnights Yesterday at 3:00 p.m.
Space Force Recap: Foreign Correspondent Like the spy investigation at its center, this episode doesn’t really add up to much in the end.
a quarantine romance Yesterday at 1:11 p.m.
Bachelor Nation Cross-Pollinates Couple With Victoria Fuller and Chris Soules They’re quarantining on his farm.
last night on late night Yesterday at 12:00 p.m.
Jimmy Kimmel Begs Older Americans to Vote Donald Trump Out of Office “Is this who you want leading us? A president who clearly and intentionally inflames violence in the middle of a riot to show how tough he is?”
black lives matter Yesterday at 10:49 a.m.
Billie Eilish Spanks All Lives Matter Crowd: ‘Will You Shut the F- -k up?’ “This is not about you. Stop making everything about you.”
overnights Yesterday at 9:00 a.m.
Space Force Recap: The Fog of War The best episode of the series so far balances some genuine laughs with smart commentary about the military’s “high-tech body bags.”
radio vulture Yesterday at 7:00 a.m.
Stan Culture Is Due a Reckoning. So Are the Celebrities They Worship. Last week was evidence of a slow and peculiar shift in the relationship between fans and the musicians they love over the last decade.
By Craig Jenkins
justice Yesterday at 1:01 a.m.
Beyoncé Calls for Justice in George Floyd Killing: ‘We All Witnessed His Murder’ “There have been too many times that we’ve seen these violent killings, and no consequences.”
More Stories