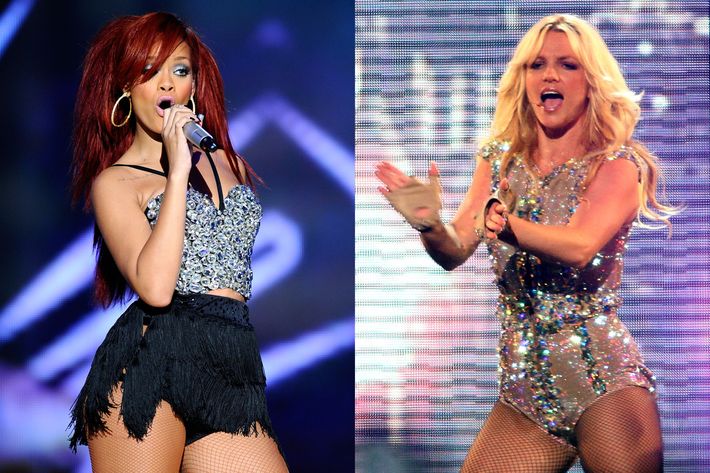 Earlier today on her Twitter account, Rihanna promised a “#SEXY collabo comin your way supa dupa soon!!!! OH YEAH!!! By popular demand …. “ She followed that up with, “Its BRITNEY BITCH!!!!” and “@britneyspears one of the biggest worldwide popstars! U gangsta #EPIC.” All that hubbub is for a newly released remix of Rihanna’s “S&M,” indeed featuring the vocals of Ms. Spears, her sister in pantslessness. But after listening to the track, it’s tough to muster up the excitement level of Rihanna’s Twitter valet.

Partially that’s because “S&M,” and its corresponding sexed-up video, felt contrived to begin with, and Spears’s presence here — she shows up to knock out the second verse and a chorus, meaning there is now a place where you can hear Britney saying the words, “if I don’t scream mercy / it’s your time to hurt me” — doesn’t change that. But mostly it’s because we can’t help assuming that the vocals here were recorded by Britney as a demo track, before the song was ultimately rejected and trickled down to Rihanna. (As you may recall, Britney had “Umbrella” first.) We have no actual evidence to support the claim other than it sounding plausible in our heads. And the fact that these are new lyrics doesn’t help the dastardly conspiracy theory, but doesn’t quite refute it either. The point is: This feels mailed-in, which is too bad because a Britney-Rihanna collaboration is a legitimately promising thing, and if the two had actually gotten in a room together and banged something out, that would have been interesting. Of course, everyone involved is way too famous for that right now.

obituary 6:32 p.m.
Remembering the ‘Tireless’ Halyna Hutchins, a Rising Cinematography Star Friends and colleagues recall the cinematographer’s work ethic and artistic eye: “There is no excuse I can accept for this loss.”
By Chris Lee
overnights 6:27 p.m.
Canada’s Drag Race Recap: Cirque du So Gay Send in the clowns.
follow friday 6:09 p.m.
Grace Freud Is One of Only 10 Gay People Left on Earth We caught up with the comedian on Instagram Live.
explainers 5:30 p.m.
Everything We Do and Don’t Know About the Fatal Rust Set Shooting The camera crew had reportedly walked off the set to protest work conditions earlier that day.
lowkey reminder 5:27 p.m.
Are the Characters of Insecure Okay?! Going Into Season 5? A brief rundown of who’s killing it and who’s on the verge of a breakdown as the HBO series heads into its final season.
overnights 4:27 p.m.
I Know What You Did Last Summer Recap: You Got Nothing to Hide Everyone finally recognizes Clara for the obvious murder suspect she is.
tv review 4:17 p.m.
Insecure Remains Magical and Messy in Its Final Season The series draws to a close with a characteristically effervescent yet uneven exploration of the dynamics of 30-something life.
now streaming 4:00 p.m.
What’s Leaving Netflix: November 2021 Glee, School of Rock, Waterworld, and more.
dunes 4:00 p.m.
How to Watch Dune, the Year’s Sandiest Movie The sci-fi epic hit HBO Max a day early.
dyune 3:59 p.m.
A Brief Ode to Sand, a Powerful Cinematic Supervillain Forget the lusty sea, it’s time to recognize sand, and then run away from her, screaming.
crime 3:56 p.m.
Robert Durst Charged With the Murder of His Wife After 39 Years Days after being convicted of killing a friend for what she knew.
stand-up 3:23 p.m.
The Stand-up Set Cycle, From Notebook to TV Special Ricky Velez, Ronny Chieng, and Gary Gulman on how they develop new hours after leaving the old ones behind.
overnights 3:00 p.m.
Invasion Recap: In the Stars Invasion’s forward progress hits a wall in an uneven transitional episode.
this week in late night 2:50 p.m.
John Oliver’s Kitchen-Sink Car Commercial Won Late Night This Week Plus, The Late Late Show’s keyboard noises and Jon Stewart on Hitler jokes.
tv review 2:42 p.m.
Invasion Made Me Root for the Aliens In the Apple TV+ series, characters across the globe bumble around in their own misery, resentful that aliens keep interrupting their tragic lives.
no time to release a movie 2:16 p.m.
The Huge Hidden Cost of Holding a Movie According to experts across the industry, the financial disarray of COVID-era Hollywood goes much deeper than bankrupt movie-theater chains.
By Chris Lee
vulture lists 2:00 p.m.
8 Great Audiobooks to Listen to This Month Katie Couric, Sutton Foster, Stanley Tucci, and more.
overnights 1:32 p.m.
Grey’s Anatomy Recap: The Webber Method Looks like things got dark for Addison during the pandemic.
tiff 2021 1:30 p.m.
Dune, Reviewed by Someone Who Popped an Edible Beforehand SPACESHIP GO WHIRRRR, CANNON GO BOOOOM, ORCHESTRA GO BRRRRAAWWRRRRRR.
By Nate Jones
overnights 1:00 p.m.
Invasion Recap: The Wrong Week Invasion is still setting up characters and relationships and pleasantly focusing on Aneesha.
More Stories