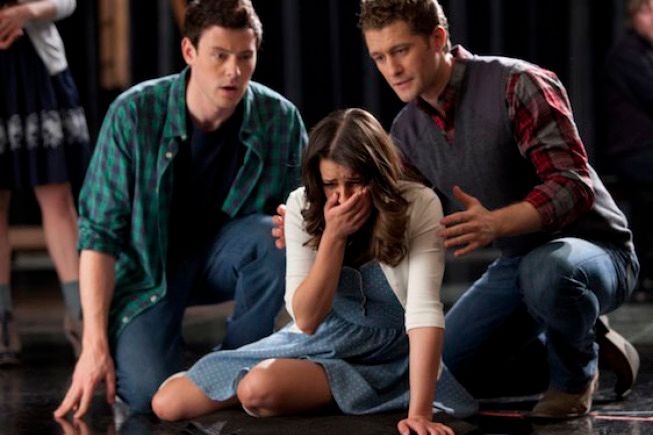 Like the casually flirty boy or girl we all developed huge crushes on in high school, Glee has dragged our hearts through the wringer this season. One day, it’s goofy-smile-inducing, the next, it’s jaw-droppingly awful, testing our loyalty to the max. So we’ve learned to get really happy when an episode falls somewhere between those two extremes — not amazing, but certainly far from bad, and just enough sweetness to keep us hanging on. “Born This Way” fit the bill perfectly. After last week’s episode, which, clocking in at 30 minutes shorter, somehow felt interminable, this epic-size one strolled along at an amiable pace, coming close to mirroring the weekly rhythms of McKinley (so much focus on the hallways this week, and to great effect). Kurt returned and sang a number nearly as great as his “Rose’s Turn”; Santana (oops — “Auntie Tana”) effortlessly spun out some of her greatest lines yet; even two of the most PSA-ish story lines yet this season (Emma’s OCD, the Kurt/Karofsky bully plot) rang more touching than cloying. Oh, mostly enjoyable Glee — it’s as if we never said good-bye!

“Unpretty”/”I Feel Pretty” (TLC/from West Side Story)
Pizzazz: 3
Relevance: 10
Absurdity: 4
It’s booty camp time, as Mr. Schue has finally realized everyone needs dance practice, until Finn slaps Rachel in the face, triggering what many of us have awaited since the beginning of season one: The inevitable Rachel Berry Nose Job Plot! After a trip to the Über-Jewish doctor, so wink-winky we wonder if the writers are actually winking or not, Rachel’s convinced she needs Quinn’s nose. Wait — is this all one really, really meta in-joke? Because, see, Dianna Agron is actually Jewish! AND has a lovely nose! As the doctor analyzes both girls’ noses, a more-ingenious-than-usual musical number and less-bothersome-than-usual mash-up ensues, and TLC is involved! We were always somewhat perplexed by this song in high school — it was pretty and the message was nice, but did they just sing about M.A.C. cosmetics? And why were the TLC girls floating quasi-Buddhists with weird animated portals into the minds of unpretty-feeling girls everywhere in the video? Digressions aside: the performance is one of Dianna Agron’s better vocal showings and, in the end, a pretty powerful duet. Hey, Chilli even tweeted about it!

“I’ve Gotta Be Me” (Sammy Davis Jr.)
Pizzazz: 6
Relevance: 10
Absurdity: 5
In an episode all about acceptance, the great twist lay in slowly revealing, over 90 minutes, which characters actually were as self-possessed as they have always seemed. And in some cases, we were surprised. Finn’s simple-mindedness actually works in his favor this week; we believe that he’d be pretty cool with the Finn-tuation as is and would choose something sufficiently Rat Packy to say so (his bad dancing is pretty adorable, as is Mike Chang’s great dancing alongside him). Will’s confrontation with Emma is more interesting than expected: She (rightly, we think) points out that OCD is perhaps too personal to share with students (take notes, Mr. Schue), while he refuses to keep polishing fruit and forces her to come to terms with her condition. Santana, meanwhile, begins the episode as the most regal and clever of super-bitches, though perhaps we should have caught on early that she’d be slowly unraveling — that “Can we all just stop lying about how we wouldn’t change anything about ourselves?” applied to her, too.

“Somewhere Only We Know” (Keane)
Pizzazz: 7
Relevance: 3
Absurdity: 7
The latest in “plots so absurd only Santana could have constructed them”: Santana will act as a beard for Karofsky if he promises to lay off bullying Kurt, allowing Kurt to return to McKinley and help the glee club win nationals. Oooookay, if you say so, Auntie Tana! In turn, Karofsky gives the glee club a rather sober and convincing speech about how he and Santana have started an anti-bullying club (uniform: Red berets! Yee!), but Finn, proving himself more perceptive than usual this week, isn’t convinced it’s for real. He tips off Burt (hi again, Mike O’Malley!), and a rather well-played showdown between the fathers and sons Karofsky and Hummel ensues in Figgins’s office. Karofsky’s dad seems like a pretty decent dude/poor old sap; Mr. Hummel still rules; and Karofsky, while definitely not reformed or coming out anytime soon, at least realizes Kurt holds the upper hand now. The way is cleared for Kurt to return, which obviously means the Warblers must appear, nonsensically, in the middle of the school day at the McKinley outdoor chilling area for an impromptu number, featuring random outdoor piano and electric guitar! We’ve always found this song nice and boring, which applies to many Warbler song selections, so we guess it’s an appropriate send-off, for the moment.

“As If We Never Said Goodbye” (from Sunset Boulevard)
Pizzazz: 3
Relevance: 10
Absurdity: 3
Kurt’s return song is, in a word, perfect. Chris Colfer’s vocals are just lovely — we adore how he resisted the urge to go all-out Barbra on this one, saving the drama for brief, key moments — and the arrangement is simple, letting the quite relevant lyrics and Kurt’s face tell the story. It’s Broadway, it’s raw emotion, it doesn’t need a big production number to hit home — it is, in short, what we always love most on Glee, and what we wish there was so much more of. Bravo, Chris!

“Born This Way” (Lady Gaga)
Pizzazz: 8
Relevance: 10
Absurdity: 3
As the episode draws to a close (read: enters its last 30 minutes), there’s a whole lotta revelation. Puck improbably — and ingeniously — teams up with Kurt to stage a mall flash mob, dancing to Duck Sauce’s insane “Barbra Streisand,” which is in fact the perfect way to convince Rachel to not get a nose job. The prom queen/king voting is under way, and Lauren Zizes, last-minute entrant, has done her recon work on Quinn. Egads: Quinn is NOT NAMED QUINN. She really has the alterna-charming name of Lucy and was once a dead-ringer for Lauren, i.e., overweight, with glasses, and apparently a bad nose, though we couldn’t really tell in that Lucy Caboosie photo. She changed her name and switched schools and lost a lot of weight and phew, this is all less than devastating, especially when it ends with Quinn actually GAINING respect from Lauren’s former fan club. In more quietly touching moments, Emma finally sees a therapist, and Brittany and Santana have their first confrontation since Santana’s love confession. As usual, Brittany embodies the Wise Child, telling Santana she does love her, and why can’t she just love herself and wear her “Lebanese” shirt, dammit?! We close with a “We Are the World” of dancing T-shirts, performing Gaga just about as adeptly as Gaga herself, with a few laughs along the way (Puck and Brittany’s “I’m With Stoopid” shirts — with alternate direction pointing arrows). Next week, only 60 minutes! But Rachel sings Fleetwood Mac and Sue dresses as Bowie … hope reigns eternal.

overnights 9:30 p.m.
RuPaul’s Drag Race: All Stars Recap: Jeff Probst’s Drag Race That’s right, henny, we’re doing Survivor now.
the industry 8:51 p.m.
California Governor Gavin Newsom Allows Film and TV Production to Resume June 12 Which is…next week.
chainsaw accidents 7:10 p.m.
Cate Blanchett Cut Her Head In a Chainsaw Accident, but She’s Fine Now It was just a “little nick.” Nothing to worry about.
overnights 5:50 p.m.
Dirty John: The Betty Broderick Story Recap: The Beginning of the End What if Betty had just walked away when Dan was late for the movies? Could all of this have been avoided?
dun dun 5:36 p.m.
SVU Showrunner Says Cop Shows Are ‘Miscontributing’ to Society He has also spoken against police brutality on Twitter this week.
police tv 5:11 p.m.
Cops Season Premiere, Live PD Episodes Pulled in Light of Protests It’s unclear whether Cops will return to Paramount.
now streaming 5:00 p.m.
The 50 Best Action Movies on Netflix Right Now Triple Frontier, Snowpiercer, Escape From New York, and more.
follow friday 4:38 p.m.
Priyanka Mattoo’s Career Advice Is a Bright Light in Dark Times Taylor Garron’s Instagram Live chat with our comedy advice columnist will make you feel good. We promise.
comedy review 4:02 p.m.
Yvonne Orji Can Turn Punchlines Into Choruses Momma, I Made It! works best when Orji’s material speaks for itself.
By Kathryn VanArendonk
tv 3:48 p.m.
Vanderpump Rules Stars Once Called the Cops on a Black Cast Member Faith says Stassi and Kristen bragged about reporting her to the police in 2018. “It didn’t work, so they were upset about that.”
tv review 3:33 p.m.
I May Destroy You Confirms Michaela Coel’s Stunning Talent An unflinching, dynamic exploration of desire and consent stands on the strength of Coel’s work as a writer, director, and performer.
roundtables 2:45 p.m.
A Roundtable Discussion on a Chaotic Week in Social Media As new rules emerge and people test the bounds of what’s acceptable online, Vulture gathers to discuss what unrest looks like on your phone.
By Craig Jenkins, E. Alex Jung, and Dee Lockett
hmm... 2:23 p.m.
Russell Simmons Accusers Say Time’s Up Distanced Itself From Documentary A THR investigation details internal skepticism around the documentary.
new york times 2:00 p.m.
New York Times Publisher Calls Tom Cotton Op-Ed ‘Contemptuous’ He reportedly said it “should not have been published.”
vulture recommends 1:51 p.m.
10 Musicians (and Then Some) Donating Toward Racial Justice on Bandcamp Today Plus 24 other musician and label recommendations, some of whom are also donating.
By Justin Curto
the replacements 12:48 p.m.
Wanted to See Wonder Woman 1984? Try These 5 Movies Instead Atomic Blonde, Unstoppable, and more.
buffering 12:30 p.m.
All Eyes on the Protests How streaming news networks are emerging as valuable resources for anyone looking to go beyond cable news coverage.
movies 12:30 p.m.
Bill Duke on the Making of His Essential ’90s Thriller Deep Cover The director contemplates the legacy of his neo-noir about cops and criminals, and what he sees in the protests sweeping the country today.
By Matt Zoller Seitz
my single is dropping 11:56 a.m.
Meek Mill Draws on Childhood, Prison for Protest Song ‘Other Side of America’ And it opens with audio of Donald Trump.
bring back my girls 11:38 a.m.
Give Drag Race Season 12 a Do-Over One of the best group of queens this show has seen deserves the full, unadulterated Drag Race experience. Enter All Stars.
More Stories