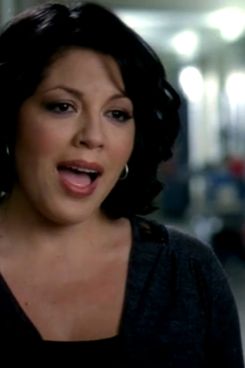 Grey’s Anatomy has long trafficked in ridiculous, over-the-top moments. So how do you top tree-fingers, ghost sex, and icicles to the gut? Why, have Scott Foley earnestly belt a make-out anthem while adjusting his hospital bed to a more smoochable sitting-up position. For starters. But comical hip-thrusts and goofy butt-shimmies were just symptoms of last night’s musical-episode disease: What did the show get out of making “Song Beneath the Song” a musical — other than a 30 percent bump in the ratings? Well, we got to hear Sara Ramirez sing, and that was nice.

In traditional musical theater, characters are able to say things in song that they can’t in prose: I love you! I want something! I’m frightened! They can woo one another, or openly mourn, or give themselves a specific label so the audience knows how this character sees him or herself. In genre-bending musical episodes of TV, like Buffy’s gold standard “Once More, With Feeling” or Scrubs’ secretly fantastic “My Musical,” the original songs reflected things we already knew about the characters, but put a unique, fun spin on the process. On Grey’s, though, there was no spin. There wasn’t even a nudge. Callie loves her baby and Arizona? Uh … we know. The songs on Buffy and Scrubs gave the characters license to be unusually literal — and the last thing Grey’s Anatomy needs is the chance to be more on the nose.

The show is already totally and completely on the nose, especially with its musical cues. The entire soundtrack is made up of songs that may as well be the characters’ interior monologues — and pushing that to a point where a dozen masked doctors are bopping along and singing about “how to save a life” takes the show from melodramatic to downright ridiculous.

When Glee is at its best, the musical numbers help contextualize relationships, or allow the characters to be more empowered versions of themselves. Sometimes there’s even social commentary or satire! (Just sometimes, though.) Not so on “Song Beneath the Song.” Did we learn anything new? Was there a new kind of joy or sorrow brought forth through the magical power of song? Did anything happen to justify the ridiculousness of it all? Alas, no.

Grey’s has done coma-vision before — when Meredith drowned, when George and Izzie had their afterlife-threshold moment — and nearly all of our leads have been on the operating table at some point. Which is why it’s so disappointing that this “musical event” was just the same old song.