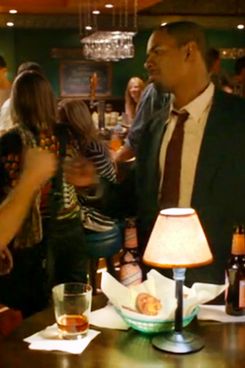 Were secret handshakes ever cool? We don’t mean frat brothers’ secret handshakes — those were never cool — but increasingly complex variations on the high five? It’s hard to remember back that long, but twenty years ago, when DJ Jazzy Jeff first visited the Fresh Prince of Bel Air and couldn’t give a regular, dull, authoritarian handshake to Uncle Phil and Aunt Viv, and had a special greeting for the Fresh Prince, it was supposed to be cool (and funny, too). But that moment has long since passed. As the latest slew of television’s secret handshakes makes clear, specially designed digital greetings are now the province of nerds trying to communicate how much they are care about one another.

Consider: There are nerds who do handshakes in a hip way, such as the bromantics Troy and Abed on Community. There are people who become nerds when they do handshakes, like Ben and Leslie, crushing on each other hard on Parks and Recreation. On Parenthood, awkward white people try to make a connection through handshakes, while less self-conscious kids adore them (handshakes — not cool, but totally adorable). In last night’s second episode of Happy Endings, there was a highly convoluted, highly nerdy secret handshake (it contained an audio reference to a Western gunfight) performed between two friends who love each other so much they momentarily stop being jaded in order to enact their little ritual. If handshakes used to be cool, now they’re just something people do when they want to hug each other but feel like that would be a little much. Check it out.

Ben and Leslie, Parks and Recreation:

Adam and his new boss, Parenthood:

the gold rush 7:52 p.m.
Nomadland Picks Up a Van-load of BAFTAs On Its Journey Through Awards Season While Daniel Kaluuya and Youn Yuh-jung collect another Best Supporting award each.
florals for spring 4:45 p.m.
Kid Cudi’s Floral Dress on SNL Was a Tribute to Kurt Cobain It was designed especially for Cudi by Virgil Abloh.
baftas 4:11 p.m.
Youn Yuh-jung Thanks British Snobs for Liking Her Minari Performance To be “recognized by British people, known as very snobbish people,” is an honor. To make them all laugh is a feat.
snl 1:04 p.m.
This SNL Rap Features Chris Redd and 3 Other Guys The other guys happen to be Kid Cudi, Pete Davidson, and Timothée Chalamet.
snl 11:59 a.m.
Carey Mulligan Gathers Rocks in a Lesbian Period Drama on SNL “This is why I pick rocks alone.”
overnights 11:05 a.m.
Saturday Night Live Recap: Carey Mulligan Kicks the Drama Into Hyperspace The Oscar nominee gets lots of opportunity to play in a wide variety of sketch conceits, and makes good use of it.
bowen fan club 10:27 a.m.
Bowen Yang Is the Iceberg Who Sank the Titanic But He’s So Much More Than That “First of all, you came to where I live and you hit me. It was midnight! I was chilling!”
snl 2:27 a.m.
Watch Aidy Bryant, Carey Mulligan Almost Break in SNL Study Buddy Sketch “Back to romance, then, I suppose …”
snl 1:27 a.m.
Carey Mulligan’s SNL Monologue Derailed by Her Husband That pesky Marcus Mumford.
snl 12:47 a.m.
Minnesota News Anchors Agree to Disagree in SNL Cold Open “Let’s just say, we’ve seen this movie before …”
awards season Yesterday at 11:15 p.m.
Sound of Metal, Nomadland Win DGA Awards The Flight Attendant also took home a trophy!
reunions Yesterday at 4:27 p.m.
Check Out This Josie and the Pussycats (Is the Best Movie Ever) Cast Reunion In which Rachael Leigh Cook offers to drive her former bandmates to the airport.
vulture guides Yesterday at 4:23 p.m.
Wait, What Are Taylor Swift’s Fearless Songs About Again? Get in Swifties, we’re going back to 2008.
By Erin Browne
gutted! Yesterday at 2:11 p.m.
Bill Maher Goes Full Gutfeld! on This Year’s Oscar Nominees “If your movie is so woke, how come I’m falling asleep?”
keeping up with the royals Yesterday at 1:05 p.m.
Prince Harry Will Attend Prince Philip’s Funeral in the U.K. on April 17 It will be his first time visiting his family since he and Meghan Markle moved to California.
hijinx Yesterday at 11:55 a.m.
January Jones Is Just Out Here Bludgeoning Rattlesnakes “I’m sorry snake family, this house is taken.”
tributes Yesterday at 11:46 a.m.
DMX Took Us All to the Basement of Our Emotions Eddie Huang remembers DMX’s irresistible cameo on Fresh Off the Boat, and the man who unexpectedly nurtured a generation.
By Eddie Huang
extremely online Yesterday at 12:05 a.m.
Sun Illuminates Natasha Bedingfield’s Response to TikTok ‘Unwritten’ Dance Open up the dirty (browser) window.
rule britannia Apr. 9, 2021
Matt Smith Remembers the Late Duke of Edinburgh: ‘Prince Philip Was the Man’ “99 and out, but what an innings.”
overnights Apr. 9, 2021
RuPaul’s Drag Race Recap: Battle of the Front-runners It’s the final competitive episode, so let’s lay out the case for and against each of our finalists.
More Stories