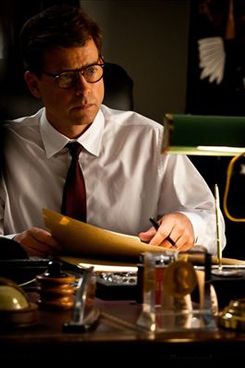 The final votes are in, and despite months of controversy, The Kennedys — dropped by History and picked up by ReelzChannel — turned out to be something of a non-event in terms of ratings. Sunday’s two-hour finale ended up being the Nielsen high point for the Greg Kinnear–led mini-series, with 1.4 million viewers watching the 8 to 10 p.m. telecast. That’s about 100,000 more than the tune-in for the April 3 premiere. The three installments between the debut and finale were far less successful, however.

Night two of the mini drew about 841,000 viewers; night three 806,000 and night four just 737,000. The Kennedys also skewed very old, with the finale only earning a 0.3 with viewers under 50 (slightly fewer viewers than an episode of 1000 Ways to Die on Spike). Still, it’s worth noting that Reelz is in about half as many homes as the biggest cable networks, limiting the audience for The Kennedys. The mini’s debut and finale also set ratings records for the channel, and when you add in the numerous replays during the week, millions of folks who had likely never even heard of Reelz until recently were exposed to promos for the network’s sometimes movie-centric programming. Add in the tons of free media coverage Reelz got for its acquisition — including an SNL sketch this weekend, tweaking the network as the home of shows nobody else wants — and it’s likely nobody at Reelz is feeling that bummed that The Kennedys wasn’t exactly a ratings monster.

In the End, Not Many People Watched The Kennedys

videology 2:15 a.m.
Olivia Rodrigo Opens Up Her Own Misery Business In New ‘good 4 u’ Video The “Drivers License” singer gives you Para-more in the latest single from her upcoming album SOUR.
videology 1:24 a.m.
Katy Perry’s ‘Electric’ Video Will Help You Roar, You Little Firework Pika pika!
barbs engage 12:31 a.m.
Nicki Minaj Beams Her 2009 Mixtape Across Streaming Platforms With new tracks “Seeing Green” featuring Drake and Lil Wayne, “Fractions,” and a “Crocodile Teeth” remix with Skillibeng.
casting call Yesterday at 11:02 p.m.
Eric Andre, Jason Schwartzman Join the Misbehavin’ on HBO’s Righteous Gemstones Praise be.
overnights Yesterday at 11:00 p.m.
Clarice Recap: A Past-Due Bill An episode about secrets and who is asked to carry their burdens faces down Silence of the Lambs’ most damaging legacy.
(human) nature is healing Yesterday at 9:56 p.m.
Your Summer Begins When Big Brother and Love Island’s New Seasons Do, So, July Spend your Independence Day celebrating the return of your favorite reality shows.
nbcuniversal Yesterday at 8:44 p.m.
Place Your Bets on Steve Kornacki As He Develops a Game Show, Heads to the Games The MSNBC wonk reportedly signed a multimillion-dollar deal with NBCUniversal.
covid-19 Yesterday at 7:07 p.m.
This Week’s Real Time Canceled After Bill Maher Tests Positive for COVID-19 The host is currently “asymptomatic and feels fine.”
promotions Yesterday at 6:12 p.m.
The Grammys’ New Changes Won’t Include a Brand-New President Harvey Mason Jr. is officially here to stay.
quar goss Yesterday at 5:53 p.m.
Well, Uh, John Mulaney Is Reportedly Dating Olivia Munn Three days after news of his divorce.
casting call Yesterday at 5:17 p.m.
Maybe the Knives Out 2 Killer Will Be Kathryn Hahn All Along The Hahnaissance continues.
good one podcast Yesterday at 3:55 p.m.
Kate Micucci and Riki Lindhome Can Make Music About Anal Sex and Tomatoes  The comedy-music duo join this week’s Good One to discuss their work and what’s next.
By Jesse David Fox
behind the music Yesterday at 3:02 p.m.
The Making of Girls5eva’s Catchy, Laugh-Out-Loud Fake Pop Songs Creator Meredith Scardino and composer Jeff Richmond break down what went into making Peacock’s new hit-making, best-selling fictional pop group.
movie review Yesterday at 3:01 p.m.
Chris Rock and a Game Cast Can’t Quite Save Spiral: From the Book of Saw It’s more a tired cops-chase-a-serial-killer movie than a tired Saw sequel.
lavender gooms Yesterday at 3:00 p.m.
We’re Getting a Third Psych Movie, You Know That’s Right!!! Gus goes rogue before his shotgun wedding.
reality tv Yesterday at 3:00 p.m.
Bravo Thawing Out Southern Charm, Summer House, Below Deck Spinoffs Cool confirmations for previously teased Summer House Winter Charm and Norway-set Below Deck Adventure.
buffering Yesterday at 2:35 p.m.
When a Quibi Becomes a Roku Plus: People are watching Pan Am again?
they're still there for you Yesterday at 1:49 p.m.
Could This Friends Reunion Trailer Be Any More Sappy? Coming on May 27.
top gun Yesterday at 1:30 p.m.
Top Gun’s Rick Rossovich on That Iconic Beach Volleyball Scene, 35 Years Later “I was always angling to use my physique as one of my assets in characterization.”
By Bilge Ebiri
reality tv Yesterday at 1:27 p.m.
Peacock Will Serve Up Spinoffs of Below Deck, Top Chef, Making It With Meghan Trainor involved, too!
More Stories