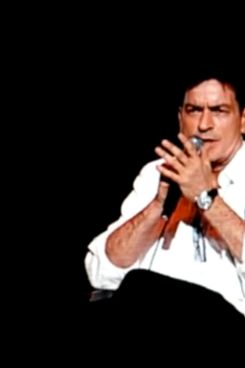 In the lobby of Radio City Music Hall Friday night, perched on an easel, was a sign. It said “No Heckling. Hecklers will be removed from the show. Thank you for your cooperation.” The crowd in the bustling hall — 99 percent white, 60 percent bros, 40 percent their dates, all drinking — read the sign, pointed at the sign, laughed at the sign, posed for pictures with the sign, and then, promptly, ignored the sign. After all, they were there to see Charlie Sheen.

This is what the Charlie Sheen’s Torpedo of Truth tour was like last night: An episode of Inside the Actors Studio in which the James Lipton stand-in has barely prepared questions and the audience is hoping for a WWF show. At 8:34 p.m., an unidentified moderator introduced Charlie Sheen by asking, “Who wants to hear the truth?“ and then making a domestic-violence joke: “If someone beside you gets out of line, give them a smack — especially if they’re your spouse.” The almost entirely full theater got to its feet to give Sheen, wearing a Yankee cap and shirt, a standing ovation. Sheen and the unidentified moderator then sat in armchairs around an end table loaded with bottles of bright-pink liquid and an ash tray, and staged an “interview.” The moderator started by asking Charlie how he felt to be in New York City. “It feels fucking great,” he said. “And surprise, I’m not staying at the fucking Plaza Hotel.” The crowd laughed. Four minutes later, at 8:38, down in front, as Sheen was starting to tell the first of many meandering stories about hotel life, came the first boo.

For the next hour, Sheen faced off against an ever-growing number of hecklers. For the first 40 minutes, he kept them largely at bay by telling stories with enough scandal to sate — what really happened at the Plaza hotel (“Never even fucked her”), about the time he and Nic Cage almost got arrested for carrying drugs on an airplane, his position on acting: “Fuck exploring the arts and finding my craft. Thousands of chicks, lots of cash! I’ll buy an Oscar.” (A strange but true fact: When Charlie Sheen tells a story, he works up a Raymond Chandler–esque, noir rhythm: ”I had a dream I invented Scotch. And that I performed CPR on a supermodel in a heroin coma. I wasn’t the one in a heroin coma.”) But for the last twenty minutes, as it became clear the “show” was just going to be a relatively tired-seeming Sheen — it was possible to imagine he was actually sober — spewing catchphrases he came up with way back six weeks ago, he lost control of the crowd.

It’s not that the boo-ers came expressly to hate on Charlie Sheen — these are the people who gave him a standing ovation when he walked out — it’s that they came to be entertained by Charlie Sheen, and he tried to satisfy them with some half-baked stories about the time he screwed a pregnant hooker in Juarez. That’s not entertainment. Sheen rocketed himself to a new level of notoriety because, among other things, he seemed to “get it” — our envy-disgust of famous people — and triangulated that into a shtick that was both unapologetically self-aggrandizing (Charlie Sheen is a “bitchin’ rock star from mars”) and unapologetically dismissive (of Chuck Lorre, CBS, Warner Bros., etc). But he doesn’t “get” that if his stage show consists of him being a lazy, boring braggart, he becomes an object of envy-disgust, not a mouthpiece for it. Go hard, or get booed. If Charlie Sheen wasn’t in this show, he would have been making fun of it. The crowd took it upon themselves to do that for him.

Sheen doesn’t really have anything to talk about but the acting career he is in the midst of irrevocably destroying, and he reached his nadir late in the evening when the subject of Two and a Half Men was raised. The moderator asked the crowd, “How many people want to see Two and a Half Men back?” The crowd cheered. Then Sheen explained, “I didn’t quit, I didn’t breach contract, they fired me.” “Would you go back for next season?” the moderator asked, before telling the crowd, “They’re listening to you. You matter,” implicitly egging on some sort of letter-writing campaign to CBS. Sheen replied, “Well of course I’d go back. It’s a bitchin’ job.” He then issued an “open invitation” to Chuck Lorre to join him for his Sunday show, “To see if we can’t work this thing out.” Everyone cheered. As if the point hadn’t been made — that Charlie Sheen, sitting onstage in front of a room full of drunk people violently razzing him, could really, really use his $2 million-a-week gig back — the moderator asked again, “You want your job back?” Sheen answered, again, “Of course I want my job back man. You guys want me to have my job back. You’ve seen the reruns ten times … I want to get my job back, so you can keep enjoying the greatest sitcom ever.” At which point, everyone booed. These people may like Two and a Half Men, but this was too much. “You just loved it a minute ago,” Sheen said, “now you’re not making sense.”

When the show ended, almost exactly an hour after it began, the crowd hurried out into the lobby. ”I thought it would be so bad I thought it was funny,” one man said to his date, ”but it wasn’t even.” “The stories weren’t even that good,” another complained. “He obviously needs a script,” a Two and a Half Men fan observed. Outside Radio City, TV cameras swarmed around asking for people’s impressions, as others huddled around to watch. “It was embarrassing,” one guy said. Another countered, “It was hilarious.” On her way down into the subway, a man asked his friend, “What were people expecting?” She replied, “Something better than this?”

Go Hard, or Get Booed: An Assessment of Friday Night’s Charlie Sheen Show

women! 10 mins ago
Teyana Taylor Is Queen of Planet Her in Doja Cat’s ‘Woman’ Video The latest visual from Doja’s Grammy-nominated third album.
close reads 20 mins ago
What Is the Allure of Kendall Roy? Succession’s would-be No. 1 boy is a deeply broken soul, and the sympathy he inspires is anything but simple.
a blog for christmas 24 mins ago
An Attempt to Make Sense of This Year’s Netflix Christmas Movies Diving deep into the similarities, differences, merits, and crimes against humanity of four holiday rom-coms.
By Rachel Handler
🥥🥥 12:07 p.m.
Kim Petras’s ‘Coconuts’ Are Finally Ripe! Give her new single a squeeze.
verzuz 11:13 a.m.
Bone Thugs-n-Harmony Turned Verzuz Into an Actual Fight With Three 6 Mafia And then Juicy J played Katy Perry.
sobriety 11:04 a.m.
Demi Lovato Says Good-bye to ‘California Sober’ “Sober sober is the only way to be,” Lovato announced in an Instagram Story.
this week in late night 10:57 a.m.
Rita Moreno’s Saucy Vibe Won Late Night This Week Plus, Roy Wood Jr. on Omicron and Seth Rogen’s very funny Adele show story.
1.5x speed 10:35 a.m.
Bruce Willis Goes to Idaho (and 5 More Podcasts Worth Trying) Including a podcast about what we do in the kitchen.
my single is dropping 10:17 a.m.
If You Wondered If SZA Was Going to Release ‘I Hate U,’ She Did It’s officially out, after she anonymously uploaded the song to SoundCloud.
overnights 9:00 a.m.
The Wheel of Time Recap: The Big City Hey, it’s the White Tower!
advent calendar 8:00 a.m.
Forget A Christmas Story, What About an Erika Jayne Story? Are you listening, Andy Cohen?
advent calendar 8:00 a.m.
Vulture’s 2021 Advent-Calendar Gift Guide Something for everyone on your list (or at least everyone who owns a TV).
the grub street diet 6:00 a.m.
Kevin Morby Depends on Noodle Soup “It’s a magical elixir for a vocalist.”
By Chris Crowley
rolling in the camp 1:39 a.m.
NikkieTutorials Collaborator Adele Is Entering Her Camp Era Adele calls the upcoming video for “I Drink Wine” the “campiest thing you’ll ever see.”
my trilogy is dropping 12:26 a.m.
Joshua Bassett Releases a Trilogy of Music Videos He asked fans to not send hate ahead of the songs’ release.
baldy connick jr. 12:10 a.m.
The Highs, Lows, and Whoas of Annie Live! So much kicking, several endings, and one very good dog.
my single is dropping 12:06 a.m.
Ariana Grande and Kid Cudi’s ‘Just Look Up’ Is Astronomical Reporting from Planet Yuh!
rust Yesterday at 10:27 p.m.
Alec Baldwin Says ‘Someone’ Is Responsible for the Rust Shooting “Someone is responsible for what happened … but I know it’s not me.”
overnights Yesterday at 10:00 p.m.
The Sex Lives of College Girls Recap: Nico’s Revenge Nico, Nico, Nico. That sneaky little fox.
overnights Yesterday at 8:13 p.m.
The Sex Lives of College Girls Recap: The Parents Are Not Alright Kimberly and Nico are … kind of sexy?
More Stories