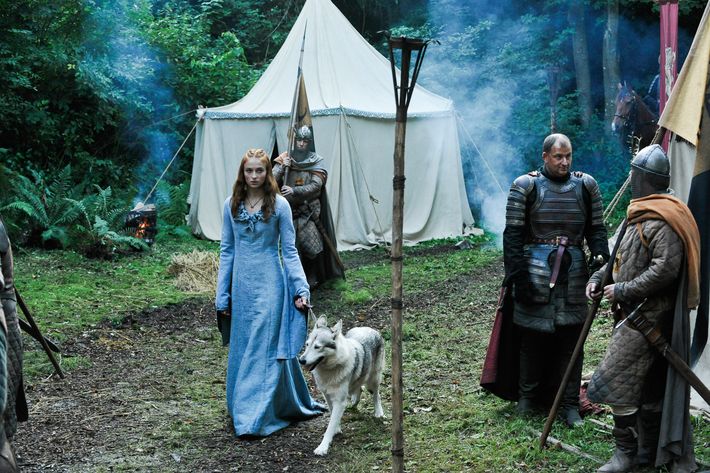 In her review of HBO’s Game of Thrones in the New York Times today, Ginia Bellafante argues that the series appeals to men: “While I do not doubt that there are women in the world who read books like Mr. Martin’s, I can honestly say that I have never met a single woman who has stood up in indignation at her book club and refused to read the latest from Lorrie Moore unless everyone agreed to The Hobbit first. Game of Thrones is boy fiction patronizingly turned out to reach the population’s other half.” Needless to say, the characterization of the series as “boy fiction” has some women up in arms (“NYT disses thousands of intelligent female viewers who may or may not already like #GameofThrones,” goes one tweet, and there are plenty more like it. Io9 has a funny this review is bogus, but Game probably does appeal to boys piece as well). Is Bellafante’s observation baloney? Isn’t it fair to say that these books, even though they appeal to some women, may be more popular with men, like most fantasy series? Or does that diminish the books, and both genders, in some way? And is describing something as “boy fiction” or “girl fiction” a helpful distinction, or just unnecessarily reductive?

Is Game of Thrones ‘Boy Fiction’?

on the record 3:37 p.m.
Will Smith, Oscars Hopeful, Is Very Sorry About the Slap “Hurt people hurt people,” Will Smith told Trevor Noah while promoting his upcoming film, Emancipation.
hosts with the mosts 3:33 p.m.
Steve Martin and Martin Short to Tag Team Saturday Night Live Austin Butler has the easy, no-pressure job of following them up as host.
trailer mix 3:00 p.m.
Let the South Side Season-Three Trailer Repossess Your Heart The Rent-T-Own crew returns to HBO Max on December 8.
vulture lists 3:00 p.m.
16 Great Christmas Movies That Aren’t Christmas Movies Including L.A. Confidential, Three Days of the Condor, and You’ve Got Mail.
the need for rewatches 2:35 p.m.
Top Gun: Maverick Is Circling Back to Theaters Before It Hits Paramount+ Throttle up!
vulture festival 2022 2:23 p.m.
Zachary Knighton Finally Got the Happy Ending That Happy Endings Didn’t Magnum P.I. restored his faith that shows can in fact be saved!
vulture recommends 1:58 p.m.
Pentiment Is a Miracle A medieval murder mystery is one of the best video games of the year.
vulture festival 2022 1:57 p.m.
StraightioLab Finally Explains to Us What a Podcast Even Is Comedians Sam Taggart and George Civeris generously educated us on the audio format.
vulture 10x10 1:47 p.m.
The Blanc Puzzle 21-Down, Four Letters: Word used 49 times in Beyoncé’s “Formation.”
trailer mix 1:24 p.m.
Red and Kitty Forman Deal With More Teens in That ’90s Show Topher Grace, Laura Prepon, and most of the original cast will return.
trailer mix 1:09 p.m.
Julianne Moore Is a 21st-Century Woman in When You Finish Saving the World Jesse Eisenberg takes on an A24 mom movie, starring Finn Wolfhard as the disaffected son.
tbs needs content 12:45 p.m.
Adam Sandler, King of Awards-Show Acceptance Speeches, Is Back His teen daughters “wrote” him a hell of a speech for the Gotham Awards.
last night on late night 12:13 p.m.
James Austin Johnson Sings, Croons, Shouts Through a Bob Dylan History Lesson With some impeccable impressions of the songwriter’s eras.
chat room 11:39 a.m.
Andor’s Kathryn Hunter Saw Eedy Karn’s Comedic Potential Immediately “She’s probably a thwarted woman herself, and she’s overcompensating with her son.”
vulture lists 11:38 a.m.
The 10 Best Versions of ‘Have Yourself a Merry Little Christmas’ A song for the cynics, the sad girlies, and the lonely boys.
rip 11:29 a.m.
Clarence Gilyard, Walker, Texas Ranger and Die Hard Star, Dead at 66 Following a career in acting, he became a professor of theater and film.
today on daytime 11:01 a.m.
Some People Wait a Lifetime for a Moment Like Matt Rogers Meeting Kelly Clarkson “This is unfortunately one of those moments where you’re meeting your absolute biggest fan.”
money money money 10:20 a.m.
Glass Onion Solves the Mystery of Getting People Into Theaters The whodunit made an estimated $15 million from just 600 theaters.
how to 9:28 a.m.
11 Rules for Writing an Original Christmas Song in 2022 According to the people behind hits for Kelly Clarkson, Ariana Grande, *NSYNC, and more.
overnights 8:00 a.m.
Welcome to Chippendales Recap: Heavy Is the Head Nick and his artistry cannot live under the pressures of a patron like Steve.
More Stories