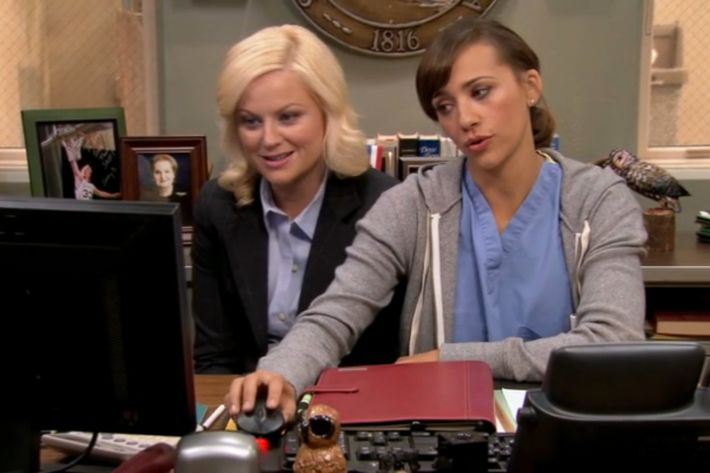 Allow me a tortured metaphor, since, like many New Yorkers, my attention is compromised on this Good Friday. Parks and Recreation is kind of like the 2010–2011 Knicks: Just when the team was finding its groove after a half-season (not, like, ten seasons) of fumbling, a couple marquee names — or, really, a marquee name and a marquee-ish name — were dropped in and the squad’s essential chemistry had to be figured out all over again. In the case of Parks and Rec, the Paul Schneider–for–Rob Lowe and Adam Scott trade paid immediate dividends, and maybe a dozen episodes later, “Soulmates” is an example of the expanded cast still playing with the potential of its combinations like a new toy. As for the Knicks? Let’s talk in a few hours, but it’s safe to say comfort and compatibility have been harder to come by.

You can almost picture the color-coded index cards in the writers’ room: CHRIS TAKES RON, ANDY, AND APRIL TO A HEALTH FOOD STORE; LESLIE DATES TOM; ANN PLOTLINE TK. These scenarios aren’t meant to move any particular plot points along — surprise-marrying two characters and ensuring the continued presence of another punched that dance card pretty sufficiently last week — but, really, for fun, which is nice for a show whose primary agenda is to be funny.

As part of Chris’s efforts to keep Pawnee from being the fourth most obese city in America — look out, San Antonio! — he wants to lead by example and remove the hamburgers from the City Hall commissary that have been the lone bright spot in Ron Swanson’s workday for twelve years. He even bets Ron that he can cook a turkey burger (which is not, in fact, a fried turkey leg stuffed into a hamburger) that would surpass any red meat Ron’s ever eaten. If Chris fails, the hamburgers stay; if he succeeds, he gets to enjoy the rare thrill of having defeated Ron at something. But really, this is just a thinly veiled excuse for an episode-long trip to the not-very-local Grain and Simple with Ron, Andy, and April. Wide-eyed padowan Andy marvels at new discoveries like dragonfruit and peaches and reveals his own culinary creation, Skittles in between two pieces of Starburst — Andy’s mouth surprise. Ron just skulks around the store in varying stages of disgust, throwing out free samples of turkey bacon and pining for his local market, Food and Stuff.

After Leslie is awkwardly rebuffed by Ben and even more awkwardly courted by Joe from sanitation, Ann convinces her to register a profile at Indiana’s premier online dating site, hoosiermate.com. (If you’re unconvinced of the show’s sly genius, say that URL out loud.) But she’s horrified to learn that her best match with a staggering 98 percent compatibility rate, is …Tom Haverford. After a brief period of denial, Leslie moves straight to acceptance, determined to find out what it is exactly awful, shallow men see in her. Let the douchevestigation — that was CSI’s working title, but the network was worried it had too many letters — begin.

Once he’s finished filing a customer-service complaint about some ill-smelling eye creams, Tom agrees to go to lunch with Leslie — his choice of restaurant, and he can have as many ‘zerts as he wishes. (His ensuing list of Haverford-coined food-related slang might be Aziz Ansari’s greatest minute ever on this show, and while there are too many gems to rattle off, let’s just say someone’s got a sudden hankering for some chickie-chickie-parm-parm.) Tom is, of course, thrilled to learn that he’s been deemed Leslie’s soul mate and runs with it, to Ben’s visible dismay. The only way for Leslie to shut him up is to actually kiss him — Amy Poehler may not be any casting agent’s vision of sex appeal, but this moment, plus the increasing tension with Ben, is surprisingly charged without ever being less than hilarious. Chris catches a glimpse, however, and warns her about his strict policy regarding relationships in the workplace. This is obviously the source of Ben’s marble-mouthed anxiety. Tom confesses that he has multiple profiles online — she picked Tom N. Haverford, the N stands for nerd and his favorite movie is books. She promptly deletes her Hoosiermate profile.

Chris’s patented turkey-burger recipe is indeed delicious — you can really taste the saffron! But Ron’s trusty hamburgers, made of meat procured from a store that also proudly sells stuffed crows, blows it away. Even Chris is sold, although he feels he needs to jog while eating one to aid digestion. Ben is still squeamish about seeing Leslie outside of the office, but he does invite her to eat at the bench by the flower mural, which just happens to be her favorite place on earth.