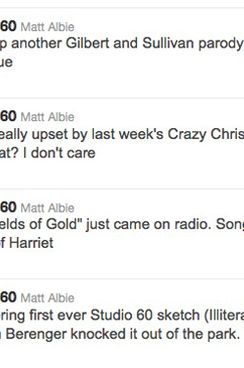 There are now Twitter streams for Matt Albie and Danny Tripp’s, Matthew Perry’s, and Bradley Whitford’s characters from Studio 60 on the Sunset Strip. The content is dead-on — “Affiliates really upset by last week’s Crazy Christians sketch. Guess what? I don’t care” and “ACLU benefit tonight” are but two of the gems thus far — and although the show was canceled a full four years ago, creator Aaron Sorkin joked about it when he cameoed on 30 Rock just a few weeks ago. It is, apparently, still part of the conversation in ways other shows from the same time simply are not. Does J.J. Abrams joke about Six Degrees? He does not.

These Twitter streams are hilarious, but they’re written by and for people who still have a solid functioning familiarity with the show, which makes this the perfect opportunity to define a new term: Studio 60, v.: to obsessively collect knowledge about a subject so that one may better ridicule it; to pursue with the passion of fandom, but instead of seeking joy, seeking only a deeper understanding of one’s disappointment.