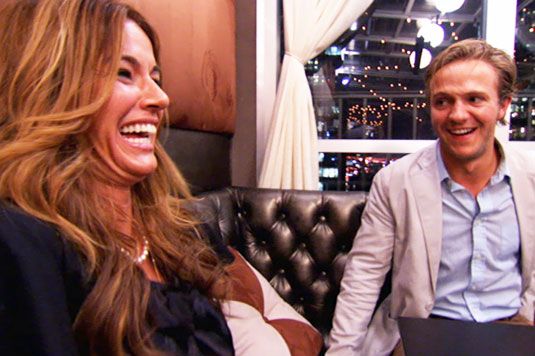 Drinking has always played a key role on the Real Housewives of New York City. Usually, it’s a metaphor for trouble — whoever the producers show drinking the most in a given episode is the housewife who you’re supposed to think is the most insane. (See: Last week, when Alex chugged no fewer than 24 glasses of Champagne.) A notable exception to this rule is Kelly, who is often the battiest broad on the show, but who is not a big drinker. Last season, the producers substituted gummy bears for booze. This season, it seems like they’re going to show Kelly devouring a series of unsuitable men. Still, for the rest of the wives, this rule holds true.

But this week, LuAnn foiled this tried-and-true strategy by forcing three of her friends to drink at a should-have-been-humiliating wine-and-singles event. So we were forced to look for other clues.

Speaking of drinking as metaphor, Cindy had us scared when she first popped onscreen and said to a waiter: “I would LOVE a glass of water,” as though “water” was code for a “double martini.” But she eventually switched to wine, and we could like her again. She was frank about her nanny troubles, which is hard to do likably on television (see Tina Fey’s Bossypants). Also, when LuAnn says she needs a Valium at the spa, Cindy totally subtly gestures at one of her employees to go get one, which was awesome. Still, not enough for the win.

This week, LuAnn attempted to assume her role as advice-giver and etiquette-enforcer. When Kelly was a little bit late to meet her for lunch, she sniped: “Should I wait on the corner like a hooker?” (Don’t make us answer that, LuAnn, we’ve seen your boots.) During lunch, she (rightly) warned Kelly that telling men she only wants to meet a husband “scares off guys.” And, knowing Kelly’s particular fetishes (as they are similar to hers: She likes ’em like she likes her truffles: rich, wrinkly, and French), she encourages her to come to Jacques’s wine-tasting event. “I think there’s gonna be a lot of Europeans there,” she said. “I think you might be interested.” At the event, where she looked lovely without a drop of turquoise (that’s how you know she’s really in love — she no longer needs her spirit mineral!), she cracked jokes. “It’s not tasting, it’s drinking,” she told her gals. “They’re all really good wines, I highly suggest swallowing.” We have to give her a lot of points for forcing Cindy, Kelly, and Sonja to go through the humiliation of the event, but LuAnn lost the episode when she got her first Brazilian, and whispered — on-camera on a reality show — “We won’t tell anybody, right?”

What’s going on with Jill? She literally only existed in this episode via text. It’s so strange … we actually kind of miss her.

Somehow, this season, Kelly has got a handle on her crazy. In fact, she’s ratcheted it down to just, well, mildly chilling delirium. For example, an hour after she greets LuAnn, she’s still saying “Hiiii” and “Hey, LuAnn … ” But mostly, she alternates between wise statements and loopy ones. The declaration that she wants to have another baby someday (she’s 43) is followed closely by the very honest, “Everyone has nanny drama.” Kelly was at her best at the wine tasting, when she really stuck to her whole “I drink beer” stance. When she asked: “I’m going to smell my wine??” we finally believed she has no idea what fermented grapes taste like. All in all, Kelly did a good job this episode, even sweetly going to Alex’s birthday party and acting normal with her, even after the tensions of last season. But she lost us when, during drinks with Cindy, she shrieked: “I am pigging out, LOOK AT ME!” … while eating a salad.

We’re just glad Ramona got the chance to do her runway walk again, and Jill wasn’t around to be a bitch about it. She was even funny about her last one! “But you got a lot of notoriety!” she told the designer, who had boldly asked her to walk again. Unfortunately, Ramona lost us when she pretended to be hurt that Kelly wasn’t coming to her dinner, even though in the last episode she DREADED that Kelly was going to show up at her table at a different event.

Oh, Sonja, Sonja, Sonja. As a commenter pointed out last week, she is suffering from Second Season Syndrome. She alternates between being the funny, sassy blonde (as she was during Ramona’s ridiculous fitting) and being a completely confusing, shrill nutcase. Sonja walks onto the episode in a crazy, Stalinist hat and coat, and refuses to take them off for lunch with Alex because she’s “wearing yoga clothes” underneath. But nobody, not even Alex, is fooled: Sonja is prepared in case she needs to make a speedy getaway. But no such escape is needed (they had a classic RHONY lunch of water and nothing, anyway), and she’s made to just look absurd. Also, in this episode, we learn some new things about her: One, that she’s not really dating that painter she’s been pretending to sleep with. And two, she’s very proud of her décolletage, which we frankly think looks like Victoria Beckham’s armpit (i.e., a scary cootch). In short, Sonja lost the episode, even before she made gay viewers acid reflux into their Chardonnay by referencing ingrown hairs in her vagina.

In a shocking turnaround, Alex came back from a crushing defeat last episode and took top honors in this one. (Yes, yes, the photo shoot was absurd and humiliating — but she made up for it by gracefully taking the ribbing of all the other housewives when they saw her hair afterward.) “Certainly we’ve got to talk about it or you know I’m going to get an ulcer,” she said to Sonja, at their peacemaking lunch, and we believed her. “No one needs to agree … I don’t want it to be petty and silly.” Wow, when was the last time someone said that on this show. Alex really came across as sane and normal, and Sonja came across as childish and unbalanced. And Alex rightly pointed out that Sonja got aggressive first, and then when Alex got aggressive in return, Sonja ordered her out of the house. “Sonja knows that Simon is one of my triggers,” Alex observes. “That’s true, he is and she does know that.”

Okay, yes, her birthday was tragic, and clearly Alex didn’t realize how the producers were going to play it (i.e., to make her look stupid). And yes, she looked like an idiot in some of her outfits. But even that is made up for by the fact that she goes bare-faced to the fashion shoot and bravely shows her speckled skin to the reality cameras. Has even Bethenny ever done that? In the end, though, it was her honesty that won her the episode. “I’m not interested in doing fashion shows or photo shoots just to have a fun day and be glamorous and be silly,” she says. “I’m interested in it to make money.”

Ancillary Winners:
Tartinery: That water looked yummy!
The Cute French Guy at the Wine Tasting: He at least doesn’t make an ass of himself.
Governors Island: Even in the cold weather, it looks so pretty!
Cindy’s Bossy Nanny: The look, after the baby tries to swallow an entire pacifier, is priceless.
Alex’s Fashion Shoot Stylist: For saying, “You look like a sexy mourner.”
Avery: Girl, you look good!!

Ancillary Losers:
Jacques: For having to describe Bordeaux as “prestigious.”
David Meister: For dressing Ramona for the past six years. In stretch Satin. And, oh, those pastel dresses!
The 23-Year-Old Blond Actor at the Wine Tasting: After Kelly asks, upon hearing he went to Juilliard, “So you’re a dancer?” he should have left it there. But no, he presses on. “Music, Dance and Acting are the three things” they teach at the school, he points out. “So what instrument do you play?” she responds. You can actually see a part of him dying, right there. It’s a part that wasn’t supposed to die until he was at least 30, also. And speaking of which: Oh my God, they make them play a scene about cancer!
Whichever of Alex’s Children Gets Champagne Spilled on His Head: That’s just degrading.
Loris Diran: Why are all these fashion designers affiliated with Ramona?

rip 27 mins ago
Pharrell, Drake, and Others Mourn the Death of Virgil Abloh “You were a kind, generous, thoughtful creative genius.”
overnights 5:00 p.m.
Selling Sunset Season-Finale Recap: Karma Chameleons This finale really has it all (except the name of the mystery ex).
rip 4:53 p.m.
Virgil Abloh, Designer and Off-White Founder, Dead at 41 He had been “battling a rare, aggressive form of cancer.”
overnights 4:00 p.m.
Selling Sunset Recap: Mind, Set, Match Christine wants everyone to move on and forget about all the lies she’s told.
overnights 3:07 p.m.
Selling Sunset Recap: Ex Marks the Spot Mystery ex, reveal yourself already!!
boyfriend reveal 12:25 p.m.
Lindsay Lohan Is Engaged To boyfriend Bader Shammas!
rip 11:18 a.m.
Lin-Manuel Miranda, Barbra Streisand, and More Pay Tribute to Stephen Sondheim “We love you. I love you. THANK YOU.”
the law 12:32 a.m.
Man Wrongfully Accused of Author Alice Sebold’s Rape Exonerated After 40 Years Anthony Broadwater’s name was cleared after pre-production for a film adaptation of her memoir, Lucky, brought up mistakes in the decades-old case.
dceu Yesterday at 4:28 p.m.
HBO Max Mistakenly Uploads Censored Version of Birds of Prey HBO Max is working to restore the original version to the streaming service.
bachelor nation Yesterday at 2:08 p.m.
John Hersey Denies Bachelorette Katie Thurston Cheated in Their New Relationship “The timeline seems fast and messy.”
charitable tracks Yesterday at 12:58 p.m.
Dionne Warwick and Chance the Rapper Release New Song for Charity The proceeds of the track will go to the charities SocialWorks and Hunger: Not Impossible.
"canceled" Yesterday at 3:01 a.m.
Dave Chappelle Took on Criticism From Teens at His Old High School The comedian reportedly invited discontent students to speak during a Q&A session.
stephen sondheim Yesterday at 2:14 a.m.
Tonight’s Performance of Company Became a Tribute to Stephen Sondheim Hours after the composer’s unexpected death, cast and audience shared grief and affection.
kimye Nov. 26, 2021
Ye Is Praying That He and Kim Kardashian Get Back Together “All I think about every day is how I get my family back together and how I heal the pain that I’ve caused.”
overnights Nov. 26, 2021
The Shrink Next Door Recap: A Tree Grows in the Hamptons The relationship between Marty and Ike is starting to get scary.
overnights Nov. 26, 2021
Selling Sunset Recap: DM Dilemma Christine is coming back to the office …
overnights Nov. 26, 2021
The Challenge: Spies, Lies & Allies Recap: Money, Money, Money Yet again, Big T is a scapegoat.
obits Nov. 26, 2021
Stephen Sondheim, Legendary Composer and Lyricist, Dead at 91 He was known for his work on popular musicals like Into the Woods, West Side Story, and Sweeney Todd.
first person Nov. 26, 2021
Frank Rich on His Friendship With Stephen Sondheim A lifetime making sense of the extraordinary songwriter — as young fan; critic and “enemy”; and, by now, old friend.
By Frank Rich
tribute Nov. 26, 2021
The Measureless Influence of Stephen Sondheim There was very little he thought a musical could not do.
More Stories