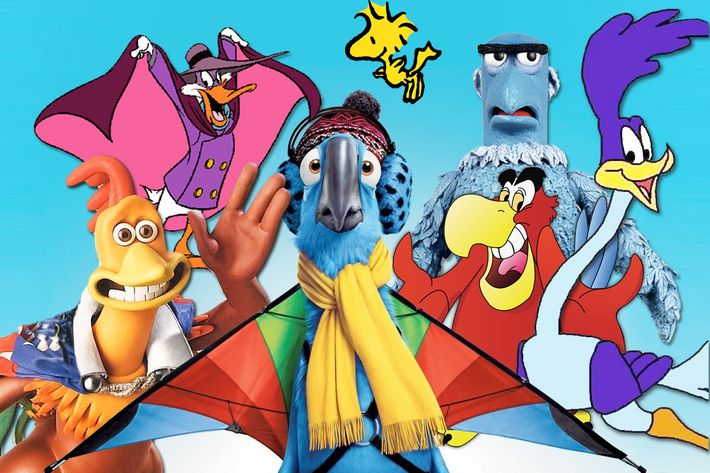 Will the new animated comedy Rio (which opens this Friday) be a hit? Box-office watchers will study reviews and weather patterns and school-vacation schedules, but they are missing the biggest indicator: Audiences have proven that they will only accept certain kinds of birds as main characters in their animated films. Zoologists take note! Vulture has taken an exhaustive look at many previous movies and TV cartoons that feature birds — from Disney to Looney Tunes to DreamWorks and beyond — and discovered that whether a bird-based feature film succeeds or fails depends on four avian criteria: personality; whether the main bird works alone or with a flock; number of songs sung by the bird; and its ability to fly. Read on to see our analysis as to which traits work best for a starring bird. With the results, we will conclude whether Rio will fly or plummet.

What type of personality does the bird have?
Cartoon birds fall into one of four categories:
Wise: Owl, Sam the Eagle, the Owls of Ga’Hoole
Trickster: Tweety, Road Runner, the trio of vultures from The Jungle Book
Smart-ass: Iago from Aladdin, the crows who mocked Dumbo
Well-meaning buffoon: Darkwing Duck, Scuttle from The Little Mermaid, Orville from The Rescuers
Verdict: Well-meaning buffoon. Wise birds only work in supporting roles; a smart bird comes off as too preachy and superior for audiences to want to hang around with for a whole film. Trickster birds fare better when they have a regular nemesis whom you know is always going to be bested, but this limits the potential for tension, and works best in episodic adventures. Smart-ass birds are voiced by character actors like Gilbert Gottfried for a reason: A little of this “bird with an attitude” goes a long way. The lovable dope, however, works as a main character, for the same reason that Judd Apatow protagonists do.

Does he or she run/fly with a flock?
Yes: Chicken Run, Chicken Little, Happy Feet
No: Donald Duck, The Rescuers’ Orville the albatross
Verdict: Flock. Birds who fly solo usually do so in a sidekick role; they are either a cranky irritant (Donald or Daffy Duck) or part of a diverse menagerie that teams together to help another animal on its quest. When a bird centers a film, he is usually part of a giant flock but yearns to break free of the group and be an individual. That achieved, he would presumably then have the time to take a secondary role for his next project and team with a frog, chipmunk and rabbit to advise a lost baby elephant or deer.

Does the bird sing?
Yes: Alan-a-Dale, the troubadour rooster in Robin Hood, the Jungle Book vulture, the Dumbo crows
No: Almost everyone else
Verdict: No singing. This activity should be limited to sidekicks who come out with feathers flying for big, upbeat numbers. Constant crooning just calls attention to the fact that birds do not make good dancers. Why? No arms. Unencumbered by ungainly wings, chipmunks, squirrels, and dogs can do-si-do and slow dance with their partners. Birds can merely swoop, which does not lend itself to a wide variety of musical styles.

Should he fly?
Yes: Zazu from The Lion King, Woodstock (though upside down)
No: Foghorn Leghorn, the Road Runner, Opus
Verdict: No. Flighted birds tend to be either kooky, googly eyed sidekicks or humorless warriors. Flightless birds, on the other hand, are funny, unlikely heroes, and usually underdogs (underbirds?) who triumph in the end: all characteristics that lend themselves to a lighthearted, kid-friendly story arc.

With these scientific preferences settled, let’s see how Rio makes out.

Personality: The central character is the domesticated macaw Blu (voiced by Jesse Eisenberg), who ends up in the jungles of Rio after being flown out to mate with Anne Hathaway’s macaw. Once erudite, the sheltered Blu comes off as a hapless buffoon when surrounded by his wild brethren: Score!
Does he run/fly with a flock? Yes: He falls in with a whole menagerie of pals that includes Jamie Foxx, Will.I.Am, and George Lopez. However, a technicality! In this instance, he is going from being a loner to trying to blend in with a pack; this reversal of the usual trajectory could be the exception that just might work. A tentative Half-Score.
Does he sing? No! While others get their numbers, Eisenberg told Vulture that he only has one lyric. Score!
Does he fly? No! The blue macaw is a flighted bird, but the creators, perhaps aware of the laws of lead-role birds, found a way around that: He’s been raised indoors in a pampered life so he never learned how to soar. Score!

Total: 3.5 out of 4. A score that certainly threatens to demolish those humorless, group-thinking, nose-diving Owls of Ga’hoole. Ornithologists will be keeping a close watch on the box office.