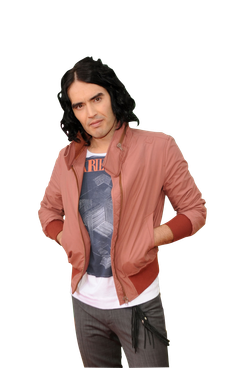 In this week’s issue, Logan Hill profiles Russell Brand on the eve of his reboot of Arthur. But, of course, Brand had so much more to say than we could fit into the magazine. Below, a few extra riffs on St. Francis of Assisi, Neal Cassady, Van Gogh, and why Brand feels most comfortable around little children.

On his quick rise to fame:
It’s only, like, three years since I shot Forgetting Sarah Marshall. I suppose I’m a human being and one of our key qualities is the ability to rapidly adapt. So quickly, I can go from, “Wow, I’m at the Oscars!” to “When d’these Oscars end?” The extraordinary becomes the mundane rather quickly. Otherwise, you would spend your life in spellbound wonder at the capacity to breathe. Whoa! How is this happening? [Brand loudly inhales and exhales.] And I look at stuff out of my retina and understand the image! In the end, you can’t spend your life in rapture and awe. Never get anything done.

On acting:
Alfred Molina, who I worked with on The Tempest, said, “We are craftsmen; you’re not an artist, you’re a craftsman.” And I thought, Fuck that! I feel more engaged when I’m involved in the preproduction, the writing. Whether or not it’s narcissistic, I’ve got a very powerful urge for people to understand me, and whilst Francis of Assisi said it’s more important to understand than to be understood, I’ve always felt more compelled to do the latter, which I suppose is why that prayer exists. Because our natural inclination is, “Why don’t you understand me? I want you to understand me!” So I am wicked, and that’s why I produced Arthur.

On his wild years:
When I was 20 years old I thought it was super cool that I was at a good English drama school, just like Peter O’Toole, Richard Burton, and Oliver Reid, and I was sort of walking around drinking bottles of whiskey, like, RARRRARARAR, being so confused. People were contradictory, like, “Oh, well, you’ve got to stop this — but bloody hell, this is glamorous!” And it was confusing. I did feel pressure. And there was no off switch, no self-regulation. Some performances were bloody great and other times I was ill and red and sweating and no good at all. There’s that great Dennis Hopper quote, “Anyone can cut off their ear, but only Van Gogh painted Crows over the Wheatfield.” You sort of realize that art is 99 percent perspiration. It is about discipline and study and care. Neal Cassady wrote fuck-all. The person that most exemplified it, that lived it, came back empty-handed. What did he write? Nothing.

On Arthur’s humor:
I loved the original because I loved Dudley Moore. I thought he was sort of warm and beautiful to watch and my favorite line was, “How did you become a prostitute?” “Because my mum died when I was 6 and my dad beat me up when I was 12.” “So, 6 relatively good years?” That’s very English. I get very charged by comedy when it’s fearless in the face of severity. I’ve always thought, Why do we give the high ground to people who want to be cerebral and serious? Humor and comedy is a great art form, and people get kind of stuffy, and say, “Stop being stupid,” and it makes me think, Fucking comedy done properly is not stupid, it’s sublime, it’s fast, it’s quick, it’s rapid, and intuitive and dangerous.

On Charlie Sheen:
Well, as someone who’s struggled with addiction and been in recovery, all I should say is that I wish him the best. Off the record … [Brand pauses and smiles.] [The media is probably hoping he’ll end up] dead, or in prison, so they can then do the retrospective, and then sort of switch the attention to whoever puts their head above the parapet next. Because we are all stimulated by the salacious. But when you’re in the middle of it, it’s a right odd process. The process for me of becoming famous was one of thinking, I’ve got this unique perspective. I kind of thought I’d be given a forum through which I could communicate spiritual truths to change the world! But then what you realize is that it’s very, very difficult to overwhelm the preexisting narrative paradigm.

On Helen Mirren:
Well, this is a thing I’ve not told anybody else: There was a time when the button on my trousers was broke, on my costume trousers, and she said, “Oh, your trousers are undone,” or whatever. She sat down on the bed, and I sort of mimed in a sexually aggressive way, “Undo my fly.” And she went, “Go on, then.” And I remember I went, “Ahhhh.” [Brand mimes being embarrassed and running away.]

On kids:
When I’m around kids, it’s such a relief. If I have to go to a party or a function, I find it quite odd, but if there are kids there, I’m like, Oh, all right, I’ll do that. The time passes quicker; there’s more joy and more ease in it. For me, I’ve felt this sort of Salinger-esque sort of moroseness, since the most remarkable child becomes nothing more spectacular than an adult.

On being ambitious:
You can’t help it, can you? Fucking Caddyshack is a good film, really, but … Annie Hall. You can’t help but be drawn to those things. I especially look for validation. You know, English comedy is very kind of competitive.

one perfect scene 26 mins ago
A Hell of an Introduction How director Romain Gavras and his cast and crew created the year’s wildest movie opening.
By Bilge Ebiri
explainers 9:48 a.m.
‘No One Has Been Ruled Out’ of Facing Charges in Rust Shooting The state of New Mexico received funds to prosecute up to four defendants in the shooting.
book review 9:42 a.m.
When Grief Returns Again, and Again, and Again … In her time-looping novel The Furrows, Namwali Serpell’s deft use of repetition makes the plot feel dynamic even as she retells the same story.
vulture picks 8:00 a.m.
25 Notable New Releases Over the Next Two Weeks Bella Hadid joins Ramy, Hasan Minhaj’s latest Netflix special, Pavement reunites, and more.
overnights Yesterday at 10:10 p.m.
House of the Dragon Recap: A Bad Egg Like it was for the Starks in early Game of Thrones episodes, the stakes for child’s play are high for these little Targaryens.
overnights Yesterday at 10:00 p.m.
American Gigolo Recap: Even Faster, Johnny This week, American Gigolo gets a little sleeker (if not sexier).
fire and blood Yesterday at 10:00 p.m.
Who’s Who in Westeros: A House of the Dragon Character Guide Keeping up with the Targaryens after episode six.
overnights Yesterday at 9:00 p.m.
The Serpent Queen Recap: The Melon and the Eggplant Catherine and Diane are now united, which makes for great television.
obits Yesterday at 8:35 p.m.
Dale McRaven, Mork & Mindy and Perfect Strangers Creator, Dies The star-making producer was 83.
behind the scenes Yesterday at 7:05 p.m.
Leslie Grace Shares New Behind-the-Scenes Footage of Batgirl on TikTok Including Brendan Fraser’s Firefly.
love can build a bridge Yesterday at 6:48 p.m.
Wynonna Judd on Touring Without Her Mother “I really miss you. Why aren’t you here so we can argue?”
injuries Yesterday at 6:06 p.m.
Post Malone Hospitalized With Breathing Difficulties, ‘Stabbing Pain’ He promised fans he would reschedule his Boston concert.
rihannaissance Yesterday at 5:39 p.m.
Rihanna to Headline 2023 Super Bowl Halftime Show The most important person the NFL has ever drafted.
darling we're worried Yesterday at 3:15 p.m.
How Did Don’t Worry Darling Become So Worrying? A timeline of the (alleged) drama involving Olivia Wilde, Harry Styles, and Florence Pugh.
trailer mix Yesterday at 1:38 p.m.
Jennifer Lopez Goes Full John Wick in The Mother Teaser Complete with training montage.
retirement Sept. 24, 2022
James Earl Jones May Be Hanging Up His Darth Vader Helmet Filmmakers recreated his voice on Obi-Wan Kenobi.
trailer mix Sept. 24, 2022
You Goes to College in Season 4 Teaser Meet “Professor Jonathan Moore.”
coming soon Sept. 24, 2022
Manifest, Netflix’s Most Unhinged Show, Is Back for a Fourth Season Whoever manifested more Manifest will be very pleased come November 4.
coming soon Sept. 24, 2022
Glass Onion: A Knives Out Mystery Gives Us Our Second Clue (a Clip) Daniel Craig returns to investigate the goings-on of Edward Norton’s Greek island.
coming soon Sept. 24, 2022
Watch Naomi Watts + Bobby Cannavale Watch for the Watcher in The Watcher Trailer Only Ryan Murphy would harass us with a promo this bewildering.
More Stories