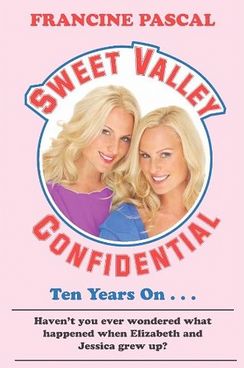 Some people never change, and the blonde and beautiful Wakefield twins, the protagonists of Francine Pascal’s long-running Sweet Valley franchise, have always been two of them. That Elizabeth and Jessica are always themselves — alternately good and not-so-good — would seem to be a big selling point of Sweet Valley Confidential, the ten-years-later follow-up to the Sweet Valley High series, since most people who will be reading it will be doing so out of a sense of nostalgia, and the twins should be as they were. Alas (and as if it needed saying), never changing from the person you were in middle school is actually a fairly dark turn of events. Sweet Valley Confidential is a shlocky nostalgia fest Trojan-horsing a downer perspective on what it means to be stuck forever and always with the immutable parts of your personality.

The Sweet Valley High series was, in the pre–Gossip Girl era, the most risqué tween series on the market. While the babysitters babysat, and the box-car children lived in a box car, the twins and their peers dealt with date rape, bulimia, cancer, car accidents, and drama. In the new books, the references have been updated — the girls listen to Beyoncé and talk about Perez Hilton and sometimes cry after their orgasms — but the drama remains the same. The novel begins eight months after the twins have had a huge falling-out. [We will now lay out the book’s plot in detail, so SPOILER ALERT] Elizabeth has discovered that Jessica and Elizabeth’s fiancé, Todd, are in love. Devastated, Elizabeth has moved to New York, gotten a job at a plausibly shitty theater publication (the Zagats of theater reviews), and now spends all her time screening her sister’s phone calls and feeling betrayed and wretched. Back in California, Todd and Jessica also feel horrible, but not as horrible as Elizabeth, since they openly acknowledge they aren’t as good of people as Elizabeth, and because they have each other and are boinking all the time.

For those familiar with the earlier books, these plot developments aren’t that surprising. Elizabeth has always been the good twin, and Jessica the bad one. Elizabeth was the caregiver, the maternal figure, the eternal martyr, the responsible one, and Jessica was the caretaker, the naughty kid, the sexy kid, the one who always asks for and gets what she wants. It seems like a testament to the basic sweetness of teenage girls that do-gooder Elizabeth was the preferred twin for what we assume was at least half of the Sweet Valley High readership, until you remember that Elizabeth always had the aspirational trump card: the steady boyfriend, Todd. Good girls may not have all the fun, but they do have future husbands.

That most people reading Sweet Valley Confidential know all of this about the twins, because they read at least one of the earlier books, means the plot of SVH is more than just absurdly dramatic in the way of one-off chick lit: It also has some sentimental heft. (While also being absurdly dramatic. Plus, in the parts that Jessica narrates, the author continually inserts Valley Girl “likes” in the most implausible places, like, as if there was no one around to tell her where they should go.) We know these girls, and we have for a long time, and so their problems are more interesting than those of strangers. Can bad-girl Jessica figure out how to have a good girl’s relationship, while being permanently, deservedly branded a horrible person? Can Elizabeth face the fact that being a good girl got her fuck-all?

As it turns out, no. No she can’t. After a bit of mucking around with the possibility that their new circumstances could change the twins (Elizabeth gets drunk and talks to a guy in a bar like Jessica would; Jessica tries not to flirt with other men, like Elizabeth), the novel concludes that these women are who they have always been. Three-fourths of the way through, Elizabeth suddenly, immediately forgives Jessica, like a little robot who’s been programmed only to ever be nice.

This is how it happens: Jessica shows up at Liz’s house in New York and demands a hug. Elizabeth complies, and has a moment of epiphany: “For Elizabeth, holding Jessica was more than holding a sister. It was what she would feel had it been her child, and she understood now that short of the ultimate separation, she could never let go of Jessica. And she never wanted to. They have to find a way. Would Elizabeth ever learn and change and see the unfairness of the relationship? No. Love is not fair. Just undeniable.” So not only has Elizabeth realized she can’t be without Jessica and decided to forgive her, when it comes to her sister, she will never “learn” or “change” or even acknowledge the “unfairness” of their dynamic. She will never expect Jessica to be anything other than Jessica, the needy, selfish fiancé-stealer. She will put up with that nonsense forever, and try very hard not to think about how self-abnegating that is.

This perspective on familial dynamics and personal pathologies is almost chilling, though of course it’s not intended to be. The twins getting back together is supposed to be the book’s “happy ending.” They could hardly stay on bad terms, even though that is exactly what they should do (Jessica is truly a hose beast). To cover up for the fact that SVC’s conclusion is, basically, that if you put up with other people’s shit, put up with their shit so wholeheartedly that it becomes who you are (the world’s expert at putting up with shit) — and thus becomes something you can take pride in — it gives Elizabeth a carrot, by which we mean a man. Good girls still get husbands. (Come on, this isn’t a tragedy.) Look out for the inevitable sequel to the sequel, in which the twins will both have babies and Jessica, being Jessica, will perform some heinous act of sabotage to keep Elizabeth’s well-behaved children out of the right preschool, and Elizabeth will pretend she didn’t see the whole sordid thing. She’s Elizabeth, after all. She doesn’t change.

into the ramy-verse 21 mins ago
Ramy Regrets Ramy-ifying His Character’s Name A Ramy by any other name would be just as funny.
trailer mix 10:12 p.m.
Doctor Florence Pugh Will See You Now in The Wonder Pugh will star in a new period piece set in 1862’s Ireland.
overnights 10:01 p.m.
Monarch Recap: A Boy and His Bull Luke wanted to impress his father by being good at bull-riding, but everyone involved is better suited to be a rodeo clown.
trailer mix 7:16 p.m.
Danielle Deadwyler Transforms Into Mamie Till-Mobley in New Till Trailer Recounting Emmett Till’s lynching at the hands of racist Mississippians and his mother’s fight for justice.
crane family reunion 6:14 p.m.
He’s Still Listening: Frasier Is Getting a Paramount+ Revival The multi-cam spinoff has been officially ordered to series.
the law 6:05 p.m.
Brad Pitt and Angelina Jolie’s Expensive Lawsuit Over Cheap Rosé, Explained Jolie has filed a new cross-complaint against Pitt.
sister sister 5:59 p.m.
Dune: The Sisterhood Casts Its Founding Mothers The HBO shows tracks the spicy beginnings of the Bene Gesserit.
remembrance 5:00 p.m.
Loretta Lynn Was Fearless She created a world where women had permission to tell their truths.
By Marissa R. Moss
memoirs 4:50 p.m.
7 Revealing Stories From Constance Wu’s Memoir, Making a Scene Including sexual-harassment accusations on the set of Fresh Off the Boat and why she sent those tweets.
music notes 4:02 p.m.
A Tour of the Tolkien Lore in the Rings of Power Score Courtesy of series composer Bear McCreary.
vulture lists 4:00 p.m.
The Best Books of 2022 (So Far) A few novels, a transcendent memoir, and an old Greek tale to enjoy by the fire.
let's go lesbians 3:38 p.m.
Oh, Velma’s Taking It (She’s gay.)
rip 3:22 p.m.
Charles Fuller, Award-Winning Playwright, Dead at 83 He earned a Pulitzer Prize and Tony Award for A Soldier’s Play.
honky tonk angel 2:25 p.m.
Dolly Parton, Miranda Lambert, Reba McEntire, and More Honor Loretta Lynn “I wouldn’t even be making country music today if it weren’t for Loretta Lynn,” Margo Price wrote.
comedy review 1:56 p.m.
Welcome to Hasan Minhaj’s Inspirational School Assembly In The King’s Jester, the comedian’s boldness gets packaged into a too-slick presentation.
By Kathryn VanArendonk
overnights 1:30 p.m.
Ramy Season-Finale Recap: It’s Maktoub Who among us hasn’t eaten a pork hot dog by mistake?
yikes 1:14 p.m.
George R.R. Martin’s Co-authors Are Not Fit to Post Rise of the Dragon co-author Linda Antonsson has repeatedly critiqued the casting of people of color on Game of Thrones and House of the Dragon.
overnights 1:00 p.m.
Ramy Recap: Dogs Are Haram The men are going through it in this episode.
trailer mix 12:46 p.m.
J.Lo Fights Pirates in a Ball Gown in the Shotgun Wedding Trailer Alongside a very handsome Josh Duhamel.
vulture 10x10 12:00 p.m.
The Mother-Son Puzzle 22-Across, Four Letters: Wolff who co-starred in Pig.
More Stories