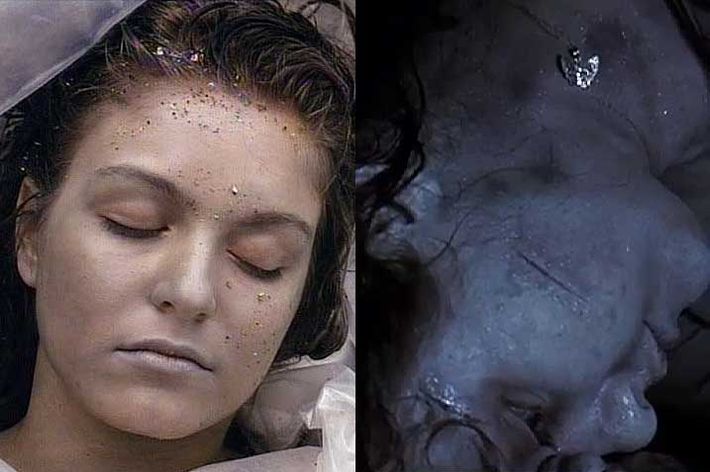 A season-long, slow-paced mystery about a girl who drowned: It’s not that hard to draw connections between Twin Peaks and The Killing, even if the former’s supernatural elements are replaced by almost excruciating normalcy in the latter. But last night’s Killing, “Super 8,” brought up even more similarities between the shows. It may not have been the most gripping or riveting episode of the series so far, but it might as well have had Agent Cooper in it. If only there had been some damn fine cups of coffee.

The major development of the episode was the discovery of Rosie’s super-8 movie, a moody, jumpy film that gives us an ostensible window into the girl’s inner life. There’s also a moment in the film that shows a tiny reflection of whoever’s holding the camera — which Linden spies right away. Laura Palmer made a video, too, though her picnic escapades were less angsty-teenage masterpiece and more goofy home video. Still, Agent Cooper needs to figure out who shot it, and he gets a good lead when he spots a reflection in Laura’s eye of a motorcycle.

Linden and Cooper have a lot in common, too. We learned last night that Linden has a history of getting too obsessed with her cases, perhaps not unlike Cooper, who once fell in love with a woman he was charged with protecting. (Complicating factors: That woman was his partner’s wife.) Both investigators are introspective and often confusing, even to the people close to them; both seem to realize they see the world slightly differently than other people do. She is often shown chewing or nibbling on something, and he might be pop culture’s single greatest pie fan. They’re also arguably the best, most interesting characters on their respective shows.

Not that there’s a shortage of interesting characters on either show, particularly in the dad department. Leland Palmer’s famous freak-out at his daughter’s funeral showed a man driven to complete madness by his unbelievable grief, and it’s one of the most important moments in the development of the character. Last night, we saw Stan completely lose it in the gas-station bathroom, giving us a more developed sense of just how lost he is in his own agony. Here’s hoping the similarities end there, though: It seems unlikely that Stan killed Rosie while possessed by an evil demon.

Finally, even though Bennet seems like too obvious a suspect at this point to be the real killer, he did have an iconic murder-related prop at his house: Tarps! His home-repair chemicals may have been under a blue one, but that clear plastic business on the floor? Pure Peaks.

overnights 12 mins ago
Saturday Night Live Season-Premiere Recap: A Rebuilding Year For Sure SNL knows you think this season is going to suck, and it has the cold open to prove it.
snl 4:55 a.m.
SNL Gets Self-Aware in Season-Premiere Cold Open “Let’s see what they spent the entire summer coming up with.”
now streaming Yesterday at 4:00 p.m.
New on Paramount+: October 2022 Season five of Inside Amy Schumer, the Indiana Jones franchise, Teenage Mutant Ninja Turtles, and more.
overnights Yesterday at 3:00 p.m.
Ramy Recap: Scenes From a Marriage Farouk and Maysa are fighting.
big boss Yesterday at 1:58 p.m.
Working Woman Keke Palmer Launches a Digital TV Network “Y’all always say I keep a job, now I’m making sure we ALL got one,” she wrote on Instagram.
coming soon Yesterday at 11:52 a.m.
Lily-Rose Depp Reportedly Says Yesferatu to Robert Eggers’s Nosferatu Bill Skarsgård is expected to star alongside her as the titular vampire.
nothing compares 2 her Yesterday at 10:00 a.m.
When America Met Sinéad O’Connor O’Connor’s stand at the 1989 Grammys showcased her power — and made her a threat.
By Allyson McCabe
job reviews Yesterday at 2:00 a.m.
Dahmer Crew Member Says the Show’s Trailer ‘Gave Me PTSD’ She called the Netflix series “one of the worst shows that I’ve ever worked on,” alleging poor treatment on set.
overnights Sept. 30, 2022
Los Espookys Recap: Skeletons Don’t Have Ears Creating your own reality can be dangerous.
overnights Sept. 30, 2022
RuPaul’s Secret Celebrity Drag Race Season-Finale Recap: Everybody Say ‘Meh’ Thank goodness that’s over.
trailer mix Sept. 30, 2022
Guillermo del Toro Unlocks His ‘Darkest Thoughts’ in Cabinet of Curiosities What’s weirder than Rupert Grint and Nia Vardalos both starring in a horror anthology?
the law Sept. 30, 2022
California’s Landmark Rap-Lyrics Bill Is Now State Law Governor Gavin Newsom has signed legislation that limits the use of rap lyrics as evidence in court.
statements Sept. 30, 2022
Angelina Jolie, Nazanin Boniadi, and More Speak Out Against Mahsa Amini’s Death “Respect to the brave, defiant, fearless women of Iran.”
chat room Sept. 30, 2022
Justin Long Talks Barbarian Spoilers and the Longaissance “I’ve heard ‘Oh, so you’re still acting?’ so many times. This helps make up for those moments.”
remembrances Sept. 30, 2022
The Mid-’90s Belonged to Coolio The late rapper achieved global fame without turning his back on his Compton roots.
By Brandon Caldwell
dinner party Sept. 30, 2022
Where Are You Sitting This Week? Will it be with Paramore and Perry Green or Ravyn Lenae and Ryan Murphy?
fire and blood Sept. 30, 2022
The Casting Challenge Behind House of the Dragon’s 10-Year Time Jump How the series’ casting director navigated a time-lapsed, multigenerational plot.
a kwanzaa miracle Sept. 30, 2022
Coolio Recorded a Kwanzaabot Cameo for the Upcoming Futurama Revival “Coolio was one of my favorite guests,” Futurama’s executive producer said.
she's not wrong Sept. 30, 2022
Reese Witherspoon Is Pretty Sure People Prefer Nancy Meyers Over ‘Auteur’ Movies “You see an auteur movie once.”
overnights Sept. 30, 2022
Bad Sisters Recap: Like a Swedish Norman Bates Did Becka do it? Or did she do something much worse by mistake?
More Stories