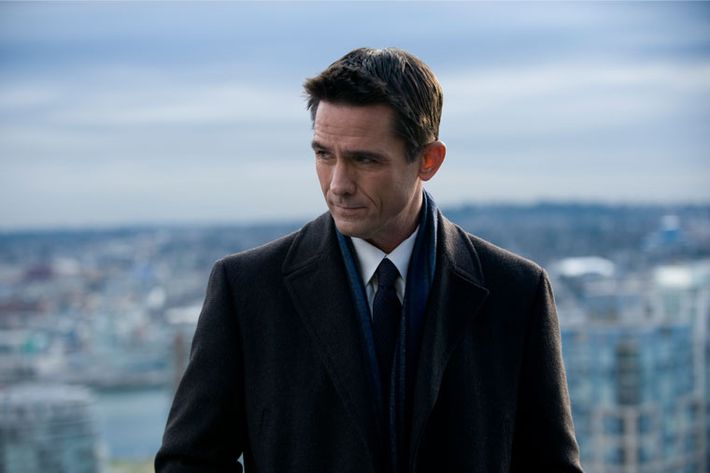 The very best television leaves us wanting more. But in today’s hyperdiversified multichannel wonderland, the feelings scripted shows can leave us with are decidedly more specific. On AMC alone, for example, a good episode of Mad Men leaves us wanting a stiff drink and a cigarette, while the adrenalized exhaustion of Breaking Bad leaves us craving a nap. The upstart network’s latest pedigreed dramatic offering, The Killing, merely leaves us wanting a towel. It is a very rainy show! There’s no way real Seattle — or even real Denmark (which hosted the original version, called Forbrydelsen) — could be this water-logged, right? Who would possibly live there? Other than mermen, Shirley Manson, and that one girl from your freshman unit who wore too much mascara and didn’t believe in umbrellas because of “art” or “nature” or whatever. (This guy knows what we’re talking about!)

But the general dampness, while absurd in reality, works brilliantly here as mood. The characters are so used to God crying on them that they’ve mostly given up on shielding themselves from the deluge (even Holder’s hood is more of a fashion accessory than rain-deterrent). This air of soggy resignation creeps throughout: from the washed-out look of every scene to the sad, drizzly weight that hangs over every character’s head, touching those who have extremely good reasons to be miserable (the grieving Larsen family, for example) as well as those who would appear to be in slightly better shape (like Detective Linden who, ostensibly, will one day be able to enjoy a cake-eating contest of her own in sunny Sonoma).

It’s like a drop of (rain)water on a paper towel, this show: It starts off small and unassuming. The next minute, the whole thing is soaked through. All of which is a way of saying: We at Vulture were slow to respond to the charms of The Killing. But now — like you, like Vancouver Seattle — we’re miserable, drenched, and hooked. Let’s get to recapping!

It’s day four of the Rosie Larsen investigation and the misdirects still outnumber the genuine clues. Chris, a.k.a. Emo Crow, is detoxing something fierce in one interrogation room, scratching at his arms, screaming at the two-way mirror, and in a so-surprising-it’s-not-actually-all-that-surprising twist, potentially outs Holder as a fellow aficionado of methamphetamines. In return, Holder threatens him with prison and shows him the part of the Halloween dance video where Rosie announces that she’s “just so ready to start living.” (Note to self: Never announce readiness to start living! Classic last words!) Meanwhile, across the station, Linden is dealing with Jasper Pinchface, the world’s meanest-looking teenager, and his standard-issue blustering lawyer. Both potential perps are shown the devil-mask rape (?) video but insist it’s not what it seems. And, of course, it isn’t: The girl in the video is the very-much-alive Sterling who, in addition to being a huge Belle & Sebastian fan, just wanted to be noticed. Life in the shadow of Rosie Larsen caused her to let Jasper and Chris have their way with her — in a way that neither she, nor her obnoxious classmates, will soon forget.

Meanwhile, the Richmond campaign is in full meltdown mode: dropping in the polls, low on cash, and the Twerpy Turncoat is now meeting for covert beers with fellow “white trash” descendent Mayor Adams. The only option? Charles Widmore! Okay, it’s really just actor Alan Dale playing Gwen’s father, an important senator or something or other. But there is something very Widmore about the way he power-brokers between the raindrops and disapproves of his daughter’s choice in men. (We’ll revisit this theory when Richmond starts flashing through time.) Still, Gwen works her sketchy magic and gets Richmond invited to a midday (?) cocktail party at the home of Tom Drexler, an objectivist millionaire cad who likes to shoot hoops, undermine the mayor, and host strange gatherings of awkward Canadian extras. Still, he gives Richmond the money (after Richmond tells the story of arriving in Seattle via a bus he never got off of), if only to screw the Mayor. Nice! New billboards for everyone!

Anyway, all signs now point to Rosie having had a secret, older lover whom she was visiting while her BFF was down in the the Cage. But how to find him? While Linden retreats back to her houseboat to be inappropriately surprised by Rick (this show and its inappropriate surprises!), who comes bearing wedding-cake samples and the promise of a nooner, poor Holder has to relive Councilman Richmond’s never-ending bus ride in search of wherever Rosie used to go. (Note: This was a very long bus ride! Jack and Reggie’s “five hour” French gangster movie is done before Holder disembarks!) All the while, the Larsens are going through the agonizing motions of dealing with tragedy: the creepy capitalism of the undertaker, the false reassurances of the priest, the horrifying glimpse of the crime-scene photos. Michelle Forbes has some strong moments with Sterling, whom she clings to for any trace of her own lost girl. But it’s Brent Sexton who delivers yet again as the tortured, hulking Stan. It turns out that the big man had just put a secret down payment on a house (“Rosie never had a backyard”), but now he won’t be able to afford it. (Do people really buy secret houses? Serious question.) So he goes to meet some sort of doughnut-eating gangster figure at a café. It seems our Stan has a bit of a dodgy past and has been ignoring this cruel cruller-gobbler for seventeen years — or as long as Rosie has been alive. Now Stan takes the man’s cash — but refuses to admit that they’re family. Still, something tells us Stan will be doing a bit more than making chocolate-chip pancakes in the weeks to come.

And … that was mostly it? But the thing is we’re 100 percent fine with this slow unveiling of story because, thus far at least, creator Veena Sud has earned it. There is real pleasure in seeing these well-chosen (and well-played) tiny moments unfurl naturally — Stan smelling Rosie’s clothing, Mireille Enos’s calm, thinking face puzzling out the connection between her son’s secret cigarette stash and Rosie’s own hiding place. Unlike AMC’s last experiment with measured storytelling, Rubicon, The Killing actually seems to have a steady hand on the rudder. (Also, it helps that, no matter what, the crime will eventually be solved. As opposed to the dreadful Rubicon which, by concerning itself with a blank, pointless conspiracy, was almost doomed to disappoint from the start.) Still, it was a blast to see the show’s mechanism shudder to life in the final moments with a flurry of (measured) activity: Twerpy Jamie is a double-agent for Richmond! And Holder makes it to his destination, one of Richmond’s community after-school programs, just as Linden discovers Rosie’s secret-admirer letters hidden in the “world” she so badly wanted to see one day. The new suspect? Mild-mannered (and mildly dreadlocked) teacher Bennett, who was in love with his “old soul trapped in a young body” student.

Day five can’t come soon enough. But pack a parka. The forecast is calling for rain.

The Killing Recap: Let the Rain Fall Down