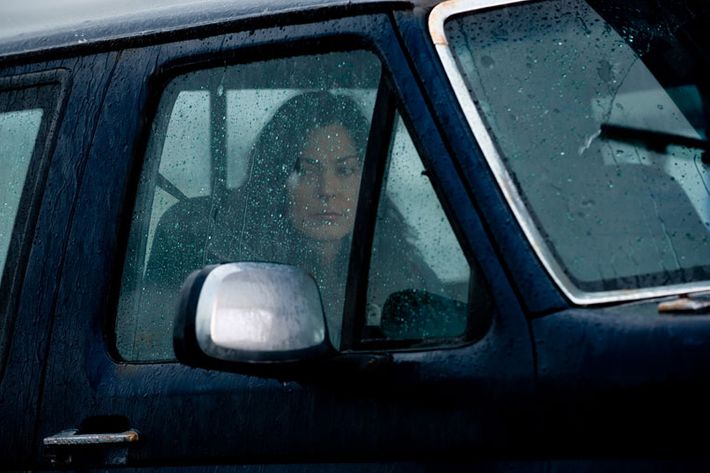 In his typically astute recap of last week’s episode, Alan Sepinwall pointed out the riskiness inherent in The Killing’s early reliance on shocking misdirects. In moments small (Linden’s “surprise party in Ted Bundy’s basement” from the pilot) and large (the damning video of Kris and Jasper Pinchface raping Rosie only, whoops, no it wasn’t rape and it wasn’t even Rosie), these dramatic tricks are good for goosing the excitement of the viewer but can only work for so long. It’s an old Pacific Northwest adage that you can only be the meth-addicted boy who cried Devil Mask so many times before the rest of the world — or at least the audience of AMC — starts tuning you out. And so the fear was that mild-mannered Power Ranger schoolteacher Bennett Ahmed — whose inappropriate letters to Rosie were so dramatically revealed in last week’s closing moments — would have his name cleared almost instantly, only for the cops to spin merrily about in search of the next secondary character to get exercised about. (The Larsens’ overly helpful aunt, perhaps?)

Thankfully, this didn’t happen: Bennett Ahmed is a former street thief alongside his best friend, Z sketchier than a frustrated artist huckstering tourists in Central Park. Unfortunately, nothing much else happened, either. How uneventful was this episode? It didn’t even rain for the first half! Not even the clouds could be bothered, it seemed.

Of course, this event vacuum has some positives. For one, it does reaffirm show-runner Veeda Sud’s commitment to the plodding, workmanlike nature of a real investigation. Some days you’re going to get attacked by a knife-wielding peeping-tom janitor who jumps out of a window. Others, you’re going to blandly eat Del Taco in your Corolla. That’s just the way police work is! Plus, the pace gives us more time to spend in the K-hole of misery that is the Larsen household, where one brother is wetting the bed and the other pulls a straight-up Omar (which, in lay terms, involves walking through a sketchy neighborhood in pajamas in search of breakfast cereal). Lil’ Larsen doesn’t want Honey Nut, though: His quarry is the delicious Bits’n’Pieces, a sweetened cereal that apparently gets around a lot. It was also Rosie’s favorite — so it serves as a touchstone for the boys’ turmoil about their new place in the family hierarchy (“Go ahead,” says Lil’ Larsen. “They don’t care about us.”) and as yet another haunting reminder of her daughter for the increasingly hollowed-out Mitch. In an attempt to normalize, she goes to the supermarket where she is promptly ignored by a friend (Do friends actually do this? Or is this part of the secret life of America’s third-most-polite-but-actually-super-unfriendly city?) and then suffers through a staged whatever the opposite of a meet-cute is with Darren Richmond, the mayoral candidate who himself seems to be coming down with a severe case of Jack Donaghy Voice. Richmond attempts to bond with Mitch over blackberries and dead loved ones, but even the politician can’t go through with his actual, cynical purpose — recruiting the Larsens to appear in a TV ad with him — so he flees with his morals tenuously intact.

Big Stan is also hurting. His surprise house is turning into a surprise money pit and the sight of his dead daughter in her specially picked-out burial dress is enough to send him into a gas-station bathroom for a solid minute of actorly sobbing. This isn’t to slight Brent Sexton’s performance — we were moved both by the sight of this bearish man breaking down and the awareness of why he chooses to hide his emotions from his family — but more the way the scene lingered on his anguish. The Killing’s slow storytelling allows us to see every moment of horrific grief visited upon this poor family. But we’re not entirely sure that we need to see it all. Visible suffering — like fictional cereals — is often best in moderation. Anyway, by the end of the ep, Stan’s buddy is personally keeping the bed wetter’s secret and Stan himself is ready to find out who the cops are investigating — and most likely take matters into his own oversize hands.

Also best in moderation? The political plot! This week, Richmond meets his mini-mole, Jamie, in all sorts of bizarrely public places (a yacht club? really?) and even encourages him to get hammered to prove his bona fides to the mayor. The result of Jamie’s investigative ralphing? The mole wasn’t from the mayor, it was from brassy councilwoman Yitanes who planted a completely unremarkable (and unintroduced) preppie in the Richmond campaign in order to extract favors like plumbing contracts for her husband. Two problems here as we see them: (1) an awful lot of time was spent on an extra mystery that we fundamentally don’t care about. (There’s a leak in the campaign? You should be more worried about the leak in the roof — have you seen the precipitation around here!) And (2) the dialogue that peppered this story line was brutal. Jamie drops lyrical science like “my ball hairs are freezing!” “I’m ready to pucker my lips and grab my ankles,” and “I’ve had enough of the ‘Tickle Me Elmo.’” (Ugh x10000.) While the mayor hams expansively and refers to liquor as “Jesus juice.” (You know who does that? Nobody!) Richmond himself is a potentially interesting character — and we’ve been fans of Billy Campbell since The Rocketeer — but so far he’s mostly a cipher. We find him compelling because we’re curious how deep his involvement in the Larsen case really goes. Other than that, he’s barely there: a brilliant, popular, liberal do-gooder with a killer jump shot. He’s nothing without the anticipation of seeing his perfect veneer wash away.

Speaking of washing away — how about some ammonium hydroxide, right? As mentioned above, things are not looking good for Bennett Ahmed (pictured here)! First his alibi about the flooring company crumbles, then his insistence that Rosie was a special intellect is severely challenged by her lame-o “artsy” filmstrips. (Also: Filmstrips? Really? In 2011? Writing notes was bad enough. We’re surprised Bennett didn’t woo Rosie via vigorous lute playing.) Worst of all, he’s a serial underage-kid lover — including his very pregnant wife, who herself was a former student. (Can we get a shout-out to the world’s worst principal here? Not only does she have a creepy sexual predator teaching sophomore lit classes, her school has a TORTURE RAPE DUNGEON IN THE BASEMENT. Why is she still employed again? This city needs new leadership! Richmond ’11!)

So Linden — whose cake-addicted fiancé, Rick, is finally getting the message about his future wife and wisely cancels the Sonoma barbecue — seemingly has her suspect. (And, worst case, she at least now has a fancy tackboard in order to get her Lester Freamon on.) She also has to keep one eye on her race-baiting, celibate partner who seems to have it in for Bennett — and also a penchant for picking up envelopes of cash and depositing them in strange mailboxes. But it could be worse: She could be newly resurgent candidate Richmond, who caps off a long, successful day of mole hunting by throwing his arm around a soon-to-be murder suspect and smiling big for the camera. From this ill-advised photo op alone we’re expecting a little more action in the weeks ahead.

overnights 4 mins ago
Grey’s Anatomy Recap: The Webber Method Looks like things got dark for Addison during the pandemic.
tiff 2021 6 mins ago
Dune, Reviewed By Someone Who Popped an Edible Beforehand SPACESHIP GO WHIRRRR, CANNON GO BOOOOM, ORCHESTRA GO BRRRRAAWWRRRRRR.
By Nate Jones
overnights 1:00 p.m.
Invasion Recap: The Wrong Week Invasion is still setting up characters and relationships and pleasantly focusing on Aneesha.
r.i.p. 12:49 p.m.
Alec Baldwin Responds to the Death of Halyna Hutchins: ‘My Heart Is Broken’ “My heart is broken for her husband, their son, and all who knew and loved Halyna.”
movie review 12:43 p.m.
The French Dispatch Is the Most Wes Anderson Movie Wes Anderson Has Ever Made The ensemble anthology is airless, overly whimsical, and utterly delightful — sorry!
By Alison Willmore
movie review 12:30 p.m.
Dune Doesn’t Care If You Like It Denis Villeneuve’s gloriously unfriendly take on Frank Herbert’s sci-fi classic wants to feel as alien as possible.
By Alison Willmore
netflix walkout 12:25 p.m.
I Was a Black Trans Leader At Netflix. Then I Was Fired. B. Pagels-Minor, the pregnant former employee accused of “leaking” Netflix metrics, on the unrest that led to Wednesday’s walkout.
true crime podcasts 12:06 p.m.
This Week in True-Crime Podcasts: Haunted Attractions and Hell Houses Plus a gangster named Pinky.
oscar futures 11:00 a.m.
Oscar Futures: Can Dune Spice Up the Awards Race? On paper, Dune is the kind of prestige blockbuster whose Oscar success would please all camps. But will the box-office flow?
By Nate Jones
music videos 10:47 a.m.
Megan Thee Stallion, Ozuna, and Lisa From Blackpink Go Global for ‘SG’ The Latin trap song’s video layers each artist’s ode to beautiful women.
this week in comedy podcasts 10:43 a.m.
This Week in Comedy Podcasts: Tiffany Haddish on Nosy Neighbors Rounding up our favorite comedy podcast episodes of the week.
billing order 10:30 a.m.
Trying to Understand Dune’s Spicy Credits Thirteen names, in a wonderfully scrambled order, with two “with”s and an “and”!
gimme! gimme! gimme! 10:21 a.m.
Now This Is What We Wanted From ABBA Their new song “Just a Notion” is Voulez-Vous era.
overnights 10:00 a.m.
Invasion Series-Premiere Recap: The End Apple TV+’s latest big sci-fi premiere sets up the series’ “aliens as outsiders” themes in seemingly unconnected events that we know are related.
way too close reads 9:58 a.m.
Zendaya Is in Dune for 7 Minutes. Here’s Everything She Does In this house, we stan Chani.
r.i.p. 9:57 a.m.
The Film Industry Reacts to the Death of Cinematographer Halyna Hutchins Elijah Wood, James Gunn, Patricia Arquette, and more shared their thoughts and condolences.
overnights 8:00 a.m.
The Morning Show Recap: Oh, Brother This whole Bradley/Laura relationship has much more of a “woman in need of a mother figure” vibe than a hot sexual chemistry one, no?
encounter 8:00 a.m.
Rebecca Ferguson Is the Real Star of Dune She plays the intimidating Lady Jessica in the sci-fi epic. She’s much friendlier in person.
By Hanna Hanra
my album is dropping 1:14 a.m.
Lana Del Rey Drops Second Album of 2021, Blue Banisters No Jack Antonoff in sight.
on set emergency 12:30 a.m.
Alec Baldwin ‘Discharged’ Gun That Killed DP and Injured Director on Rust Halyna Hutchins, the director of photography, was 42.
More Stories