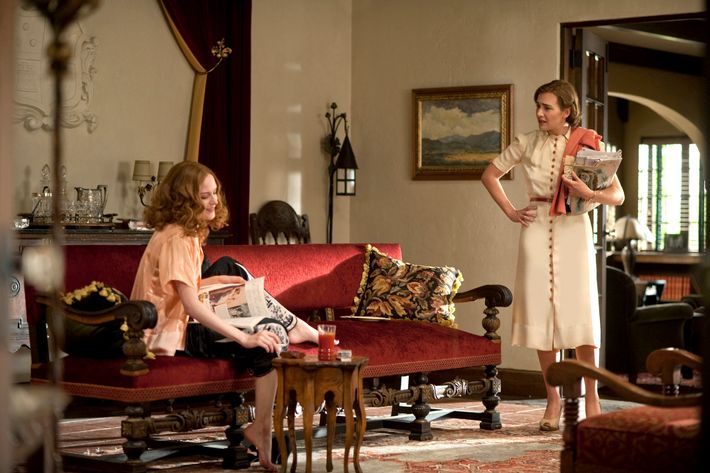 “Let’s get stinko.” And with that — the best “is that really the final line?” since Eyes Wide Shut — the five-part, three-week HBO mini-series Mildred Pierce drew to a close last night. Whether you found it all a bit slow and meandering, or enjoyed all the extra time spent on the story (since it made the scene where Kate Winslet tried to strangle Evan Rachel Wood so much more satisfying), the Todd Haynes–directed production was packed with great performances and swoon-worthy period details. But what did we learn from it? Here are five of the most important things we took away from Mildred Pierce.

Sex friends cannot, in fact, be best friends.
You are wrong, No Strings Attached star Natalie Portman! Sure, we were impressed by how the newly single Mildred Pierce got her swerve on with Guy Pearce and James LeGros (well, less so with James LeGros) and managed to stay friendly with all her exes, including her itinerant husband Bert. But then LeGros double-crossed her, and Mildred made the mistake of marrying her fuck-buddy Guy Pearce after a single afternoon bout of ex sex. As he later pointed out, the whole point of sex friends is that neither of you thinks the other one is worthy of a relationship, so any relationship that does result from it will be one with some really unhealthy condescension at its core. (Of course, his point may have been lost on Mildred, since he told her this after boning her daughter.)

Melissa Leo is capable of delivering each line the exact same way for nearly six hours.
As Mildred’s neighbor Lucy Gessler, Melissa Leo was indispensable: Not only did she serve as Mildred’s confidante and advice-giver for all the important expositional scenes, but she also calibrated all her line readings to “bemused” and then never wavered over the entire five-part mini-series. Mildred’s husband just left her? Oh honey, here’s a conspiratorial smile. Mildred’s daughter just died? Who hasn’t been there, am I right, ladies? Aliens just invaded Glendale, and one of them took Veda as its child bride? Well, why didn’t ya say so? Come on, honey, I’ve got some laser guns in the basement for exactly this purpose. Let’s show ‘em how a couple of red-hot mammas kick ass.

Vaginas were so popular in the thirties.
Not that they’ve ever been unpopular, but in Mildred Pierce, vaginas took center stage! Whether they were being penetrated by Guy Pearce’s toes and tongue, or — through the anticipation brought on by Evan Rachel Wood’s press tour — covered by a much-heralded merkin, each installment of Mildred Pierce had us on the edge of our seats, wondering what would happen to a vagina next. Were Mildred’s pies a vagina metaphor, too? This was directed by Todd Haynes, so it’s possible!

Glendale is the pits, baby.
Mildred Pierce didn’t actually film in Glendale, the Los Angeles community where the bulk of it was set, and it’s no wonder: Every character in this mini-series was vocally hating on it. The last two installments of Mildred Pierce were particularly filled with anti-Glendale hysteria, as Veda screeched for hours about the sleepy neighborhood and Monty insisted that he would never even think of marrying Mildred as long as she lived there. (As soon as she started looking at real estate elsewhere, BAM! Engaged.) Don’t take anyone from Mildred Pierce shopping at the Americana. They wouldn’t like it.

“Sometimes, children are bad people, too.”
Though that line was delivered this weekend by Cate Blanchett in Hanna, it’s an appropriate sum-up of the relationship between selfless Mildred and her venal daughter Veda. Mildred tried to give her daughter everything, but nothing was enough for Veda, whose ravenous appetite was only matched by the pleasure she took in torturing others. Even Mildred’s final pronouncement, “To hell with Veda,” carried little force; after all, the too-forgiving Mildred was saying it to her ex-husband, another family member she kicked out and ultimately let back in her home. To borrow from Mildred’s restaurant special: When it came to Veda, she was chicken, and when she should have been firm about closing the door to her daughter, she waffled. When put that way, what other choice is there but to get stinko?