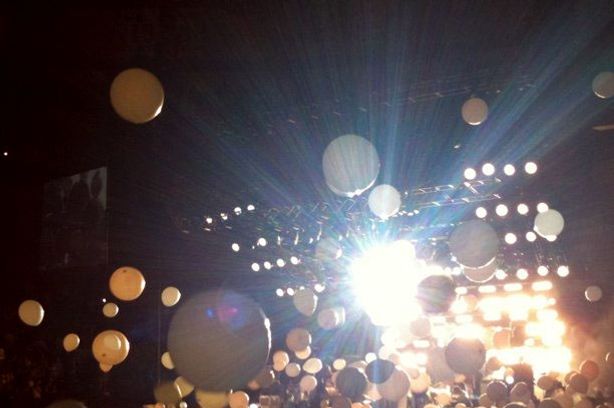 LCD Soundsystem’s last-ever show, on Saturday night at Madison Square Garden, followed the template of their preceding five-night finale run, with a massive three-hour-plus set that stuffed together everything front man James Murphy could think of. But seeing as Saturday really was the finishing line, that epic set felt like the necessary preamble before the last song — which, as everyone in the building could have told you, would be “New York, I Love You But You’re Bringing Me Down” — and the collective, cathartic acceptance of the band’s mortality. That’s not to say that there wasn’t great stuff in the preamble — just that, looking back, it’ll be hard to remember anything else but the end.

Some of that aforementioned “great stuff”: As per the band’s instructions, many concertgoers showed up in all black or all white. There was plenty of white formalwear and black hoodies; one guy had a white jumpsuit with LCD lights tucked inside his clothing but shining through. (There were also, in general, a lot of glow sticks.) Murphy and the band managed to make the MSG stage feel intimate, by taking up almost every inch of space with various bits of equipment and then some: Behind stage right, there was a full backup vocal choir, dressed for some portion of the night in what looked like tinfoil; behind stage left, there was a homemade spaceship and a guy with a Galifianakis beard inhabiting a lost-astronaut character (he had a microphone, but we couldn’t really hear what he was saying).

Any song that you could have reasonably expected the band to crush in the arena setting — “Drunk Girls,” “Yeah,” “North American Scum” — was indeed crushed. (Arcade Fire’s Win Butler, Will Butler, and Régine Chassagne came out to sing backup vocals on “Scum,” which was superflous but appreciated.) And Murphy’s stage banter was, as always, top notch. After “Scum” juiced the crowd, and before going into a cover of Alan Vega’s “Bye Bye Bayou: “People are pretty psyched, so we thought it’d be a good idea to now play something no one gave a shit about. Welcome to our rehearsal.” Later: “Hey, New York, why don’t you allow mixed martial arts?” And then, while counting down the last songs of the set: “I know it’s a long show. Thank you for putting up with us. We have three more songs left. [Pause.] It’s like New Year’s except, next year, we’re dead.” At some point during the encore, Murphy’s pal Aziz Ansari jumped the barricade and went crowd-surfing. He disappeared into the crowd and then reappeared, pushing his way back to the front, grinning. (Before that, Aziz was live-tweeting the show: “Oh shit, Patrick Ewing just came out to play cowbells on ‘Daft Punk is Playing at My House.’”)

And then, at about twelve-thirty in the morning, it came time for the end. Murphy let himself get emotional in his intro to “New York, I Love You,” shouting out his friends and his family, apologizing to and thanking the people in the cheap seats, pointing out that he was wearing his father’s watch. The band inched its way into “New York,” drawing it out expertly and stretching out its already epic nature, first with dramatic pauses and then with massive squeals of noise. At the very end, with LCD still bashing away, giant white balloons rained down from the sky, and everyone gleefully hopped around like maniacs, popping them and slapping them around.

With Balloons and Spaceships at Madison Square Garden, LCD Soundsystem Sign Off