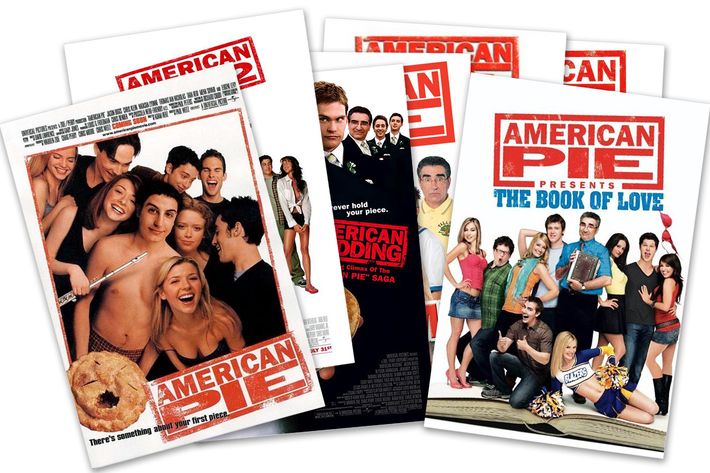 As part of this week’s study of sequel culture, we charged writers Gillian Flynn and Brian Raftery to watch all seven installments of the American Pie series, to examine what happens to a franchise as it devolves from original hit to string of straight-to-video quickies. Their first round would prove the least painful, as they focused on the first two studio efforts. But in today’s Part 2, things get uncomfortable for our heroes as they move into the third entry, American Wedding (in which the original cast starts to flee), and the video-only American Pie Presents Band Camp. What is life like when Eugene Levy is the only man left standing?

Gillian Flynn: With 2003’s American Wedding — in which Jim and band-geek Michelle get hitched — we hit the turning point of every franchise, when the original cast starts peeling away to do other, theoretically better projects. American Pie 2 wrapped up with a massive party, during which our four best friends — Jim, Oz, Finch, the other guy — all gave each other nods of nostalgic, friends-forever, this-is-kinda-like-Diner-right? respect above the vomit-spewing, body-shotting crowd. The forced nostalgia of that moment sets up a tricky challenge for Wedding: How to deal with the loss of Chris Klein’s Oz? The answer was the inelegant, Let’s not deal with it at all! Far be it for me to demand realism in a movie featuring canine-fellatio and pube tornados, but you can’t hammer and hammer away at a theme — these guys are loyal best, best friends FOREVER — and then not even throw out a “Too bad Oz can’t be here because he moved to Paris and/or took a starring role in Rollerball.” I found it unsettling: If Oz can be erased entirely, what other franchise rules will be broken?! Will Stifler not eat that dog shi- Ah, faith restored!

Brian Raftery: Not only does Stifler eat pooch poo, he chews up every scene he’s in — which is pretty much all of ‘em. By the time of Wedding’s release, Sean William Scott was arguably the franchise’s biggest star, and the movie is so Stifler-centric, you can’t help but wonder why Universal didn’t just give him a solo gig. Instead, they stick with the tried-and-true AP scenarios (public humiliations, implausible hookups, and a feel-good finale) but with one interesting difference: Wedding is a markedly prettier movie than its predecessors, filmed in anamorphic widescreen and shot like a Gordon Willis film in his dark-hued seventies heyday. Universal clearly dumped a lot of money into this installment, and my guess is they wanted to reassure the teens who’d flocked to the original films — and who were now college-aged themselves — that the American Pie franchise was maturing accordingly. It’s as if they were saying, “See? These movies aren’t just Blockbuster-friendly wank material! They’re about real people, damn it, with foibles and frustrations just like you! We’d never sully the AP brand with a cynical, boobie-driven sequel based on an unlikable ancillary character!”

And then they forgot about all that, and two years later, we got the first straight-to-DVD sequel: American Pie Presents Band Camp.

GF: With APPBC, the series puts the spotlight on Matt Stifler, Steve’s little brother, who was an annoying little Scrappy Doo of a horndog in American Pie 2 and now is basically just Scott’s Steve Stifler with darker hair (the actor, Tad Hilgenbrinck, may have forever typecast himself as That Kid Who Does an Eerily Spot-on Seann William Scott, which will come in handy once Balls Out 4: Seriously Big Balls! gets a green light). The means by which jock asshole Matt Stifler arrives at Band Camp defy all plausibility, but then so does the presence of Eugene Levy — the only major returning cast member; he’s there as a guidance counselor … because he’s filling in for his pregnant daughter-in-law Michelle. But I really don’t care how Levy ends up in this movie, I’m just glad to see him. His consistently square but earnest dad provides a little scrap of decency I can cling to amid the madness. At this point in the series, I have developed a strange, strong fondness for him, maybe because I know if I hug him, I won’t come away sticky.

BR: You can only imagine how Levy’s agent sold this to him: “The good news is, you’re gonna get top billing! The bad news is, it’s top billing in a movie in which semen is used as sunscreen!” But as incongruous as he may be to the plot, getting Levy onboard for part four is hugely important: Not only does it allow for a modicum of continuity within the series, it legitimizes the film for video-store dwellers who tend to steer clear of straight-to-the-shelves sequels, especially those that trade in on a name without delivering any actual name talent (I’m still bitter over 2004’s Casper Van Dien–free Starship Troopers 2). As I mentioned before, Universal is savvy about prolonging these seemingly finite franchises; in terms of brand management, Band Camp can only be considered a success. As a movie, though, it’s essentially joyless.

GF: I must admit, I did like future Hannah Montana alum Jason Earles as Stifler’s geeky roommate — he had a delightful Chris Makepeace–in-Meatballs vibe that made me wish I was watching Meatballs. Or even Meatballs 4, starring Corey Feldman on water skis.

At this point in our American journey, I wish that we’d instituted a boob count, because I think someone who was good at math (like those band geeks, grrr!) could come up with a formula that went something like: take the franchise number and multiply by 62 for total amount of breast shots. Or hell, shots of any sort, like, say the semen spray that takes out grandma in the opening of part five, American Pie Presents: The Naked Mile.

Read the rest of this series: Part 1: Two Writers Watch All Seven American Pies for a Case Study in Sequelitis
Part 3: Our Writers Face the End, and a Lot of Bodily Fluids

Gillian Flynn is the author of Dark Places and Sharp Objects, and former TV critic for Entertainment Weekly. Brian Raftery is a Vulture contributor and author of Don’t Stop Believin’: How Karaoke Conquered the World and Changed My Life.