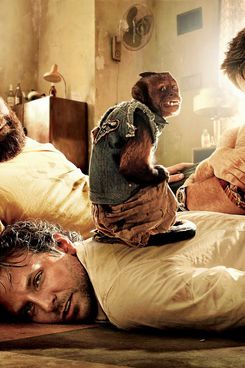 The Hangover: Part II (out tomorrow) has not had a lot of critics praising its originality. (Well, not a lot of critics praising it, period.) It reprises the familiar formula of four dudes, an unknown city, a Mike Tyson tattoo, and screaming; however, the sequel does introduce one all-new element to the franchise that just might be enough to make us go see Part II in spite of the reviews: a monkey in a jean vest — drug-running monkey in a jean vest, no less. Whose enjoyment of a movie has not automatically been heightened by the presence of a clothed animal? Seals in tuxes, apes in Hawaiian shirts, dogs with sweaters: They make you feel as warm inside as these bundled-up animals are on the outside. And so, inspired by Crystal the smoking Hangover monkey, we now honor the great moments in movie and television animal fashion. Enjoy!

From Elephants in Overalls to Monkeys in Denim: A Brief History of Movie Animal Fashion

tv about movies 7:06 p.m.
Ava DuVernay Is Making an HBO Max Show Based on One Perfect Shot Twitter Account Each episode will take a deep dive into a director’s “most iconic shot,” as well as a seminal cinematic image that influenced their career.
overnights 7:05 p.m.
Ziwe’s Instagram Live Show Recap: ‘The Birmingham Jail Thing’ Re: Baited, Ziwe interviews funny ladies Liza Treyger and Patti Harrison, getting beneath the jokes and exposing them both as [gasp] non-readers.
food media 4:39 p.m.
Five Bon Appétit Stars Have Exited the Test Kitchen As has print employee Ryan Walker-Hartshorn. All say Condé Nast Entertainment is failing to make meaningful change to the way it does business.
in the air tonight 4:25 p.m.
Watching These Teens Hear ‘In the Air Tonight’ for the First Time Is So Joyful Experiencing that drum fill for the first time is like seeing a new color.
the inside track 4:23 p.m.
Victoria Monét Saved the Best Songs for Herself The title track of Monét’s ’70s-tinged debut proves she’s not just someone else’s songwriter.
By Justin Curto
movies 4:23 p.m.
A New BTS Movie Is Coming to a Theater Near You That is, if it’s open.
explainers 3:30 p.m.
TikTok Has 45 Days Until … What, Exactly? A breakdown for those of us having a breakdown over the TikTok ban.
follow friday 3:01 p.m.
Raina Morris Is a Self-Plagiarist “What, am I gonna get expelled?!”
trailer mix 2:35 p.m.
Like Oh My God the Season Two PEN15 Trailer Is Here “I’m sorry, I’m just hormonal!”
a-wap-bop-a-loo-bop 2:20 p.m.
A Guide to All the Cameos in Cardi B and Megan Thee Stallion’s ‘WAP’ Video From Normani to Rosalía, and yes, Kylie Jenner.
By Justin Curto
movie review 2:12 p.m.
The Burnt Orange Heresy Is Light on Thrills, Heavy on Beautiful Things Claes Bang and Elizabeth Debicki star in a suspenseless noir that’s worth watching mainly for how luxurious everyone and everything in it is.
By Alison Willmore
trauma 2:07 p.m.
Last Chance U’s New Season Takes an Unexpected, Sad Detour The episode “Greyhaven” is about football, sure, but it’s more about the trauma echoing through the family of fantasy author Marion Zimmer Bradley.
this week in late night 1:52 p.m.
Seth Meyers Taking ‘A Closer Look’ at Trump’s Axios Interview Won Late Night Also, Jamie Foxx is so nice he makes the list twice.
song review 1:29 p.m.
Cardi B and Megan Thee Stallion’s ‘WAP’ Is Hall of Fame Filth A torrent of horny one-liners that restores the feeling of sneaking and listening to rap songs with X-rated lyrics as a kid.
By Craig Jenkins
nasty 1:21 p.m.
The ‘Clean’ Version of ‘WAP’ Is Actually So Much Filthier It’s much more detailed in a sensory way.
By Kathryn VanArendonk
dear god it's good 1:14 p.m.
The Lost World Is Steven Spielberg’s Nastiest Film, and I Love It It’s a truly demented series of mostly wordless action and horror setpieces whose technical proficiency is matched only by their cruelty.
By Bilge Ebiri
keanews 12:28 p.m.
John Wick 4 Isn’t Even Out Yet, But John Wick 5 Is Already Confirmed The poor guy needs a vacation.
jaja ding dong 12:20 p.m.
The Elves Forced Iceland’s Eurovision Contestant to Play ‘Jaja Ding Dong’ Have they gone too far?
the industry 12:10 p.m.
Judge Reverses Decades-Old Antitrust Rules Governing Movie Theaters While you were sleeping.
best of 2020 11:55 a.m.
The Best Podcasts of the Year (So Far) Including Wind of Change, Floodlines, and an unsettling indictment of American rehab facilities.
More Stories