The Wolf and the Lion
Season 1 Episode 5 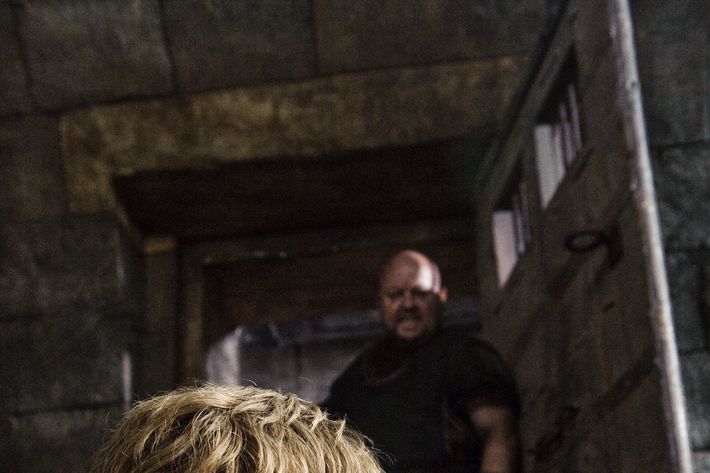 Each week, Vulture brings you a postshow referendum on Game of Thrones, from Westeros first-timer Margaret Lyons and George R.R. Martin expert Adam Pasick. This week, “The Wolf and the Lion” had blood, body-image issues, and some unexpected nipples.

ADAM PASICK: In The Big Lebowski, Walter Sobchak informs his bowling league opponent Smokey that “this is not ‘Nam. This is bowling. There are rules.” With the latest episode of Game of Thrones, I feel like we’re finally getting a taste of the brilliant, perverse world that George R.R. Martin created. In Westeros, like ‘Nam, there are no rules — knights who lose at jousting can go murderously buck wild, one of the King’s Guard can brutally attack the King’s Hand, and there’s even room for some unexpected nipple shaving. Anything can happen!

For a superfan like myself, this is all a very good thing. The show’s characters can finally start expositing and get down to the bloody, unpredictable business of committing acts of semi-calculated mayhem on each other through words (the verbal knife fight between Littlefinger and Varys) and deeds (the Mountain as sore loser; Jamie Lannister’s ambush).KaitlynCatelyn Stark seems to get it (although her impulsive kidnapping of the Imp is getting derailed by her nutso sister). Ned Stark, who thinks that killing Danerys is against the rules and is getting played like a marionette by everyone he encounters, plainly does not.

MARGARET LYONS: Except there seems to be one rule, and that’s that everyone has to dislike each other. The King and Queen? Hate each other. Kaitlyn and her sister? There seems to be some bad blood. Ned and Jamie? We knew they didn’t mesh well, but this week they came to seriously dangerous blows. The people of Westeros need to go on a ropes-course retreat, middle-school-style, and learn how to trust and accept each other.

Mostly, though, aaaaaah. I think we need to start making reaction videos while we watch this, à la Goatse or people drinking Malort or whatever, because I was agog for a great deal of this episode. My notes this week read “aaaah!,” “whose dong is that?” and “nursing!!!!!!” which pretty much sums up how I felt about “The Wolf and the Lion”: shocked, a little confused, and pretty grossed out. (Not that breast-feeding is gross at all! But if the kid is old enough to order an execution, he’s old enough to be weaned. I think this is a good rule, parents!)

Let’s start with the highlights: It was nice to see Tyrion kick ass, and I’m guessing there’s some symbolism in him beating the living shit out of someone with his shield — someone who can turn defense into offense in the blink of an eye. I got my weekly line that reminded me of Macbeth — Jamie threatening to “open your lord from balls to brains” sounded an awful lot like getting “unseam’d … from the nave to the chaps” — and the backstory of loathing between Robert and Cersei managed to explain a lot without being boring. That’s a major, major triumph for GoT because, even with the horse-beheadings and eyeball-stabbings, the show can still be coma-inducing in parts.

On the lowlights list this week? I have to come clean: I had pretty much no idea who the guys were who were shaving each other. “He’s the one with the made-upish name” and “scraggle-hair” aren’t distinguishing features on this show, and I’d like to believe that my confusion points to a certain narrative blurriness: So far, these characters haven’t really distinguished themselves. Well, they have now — “nipple-shaver” will stick in my mind, call me crazy. But other than that, it seems like everyone wants to depose the King, everyone is lying about whom they are sleeping with/have slept with/want to sleep with, and everyone is one harsh word away from killing someone they ostensibly care about.

One last small thing: Why is this show so obsessed with fatness?

PASICK: I actually liked that tender little moment of hateful affection between the Queen and King. Seventeen years is a long time to resent one another for (a) not being Lyanna Stark and (b) being a whoring bastard who pines for Lyanna Stark, respectively. That kind of rueful, resigned loathing might ring true for a lot of couples, amiright, married people?

I’m not surprised that the nipple-shavers didn’t seem familiar. Renly and Loras haven’t gotten much screen time. And I have major issues with the way the Renly character has made his transition from page to screen. In the book, he was a vaguely heroic, charismatically vain knight whose sexual orientation was the stuff of a few scant whispers. In the show, he’s whiny and annoying and apparently has never cut himself shaving. The show creators are going way off-piste with his character, and I hope they know what they’re doing. Otherwise the depilatory knights are dangerously close to descending into cartoonish stereotypes.

As for fatness: Assuming you’re talking about King Robert, I think his armour-stretching obesity is meant to show how far he’s fallen, and what an impotent joke he’s become. I’ll see your Macbeth and raise you a Julius Ceasar: “Let me have men about me that are fat, / Sleek-headed men, and such as sleep a-nights. / Yon Cassius has a lean and hungry look. / He thinks too much. Such men are dangerous.”

I don’t think there’s much body fat on Jamie Lannister, do you?

LYONS: I loved that moment between the King and Queen — it was humanizing and tragic. There’s that whole heavy-is-the-head stuff for Robert, sure, but what really eats away at him, what he really can’t handle, is that he lost his one true love. You can rule all seven blah blah blahs, but you can’t go home to that scary sword-chair throne, you know?

We’re officially halfway through the season now, and while some of my patience has paid off, I feel pretty safe saying the show works best as a companion piece for the books, and not as a stand-alone work. Large chunks of the episodes still drag (how much genealogy can I listen to before experiencing telehibernation?), characters blur together, and despite small spots of explosive conflict, it’s been a lot of hurry up and wait … for winter or whatever. Is this a show, or just the fanciest, nakedest Cliffs Notes of all time?

PASICK: Fancy, naked Cliff Notes — I wish they had those when I was in high school!

I’m feeling blue that you are thumbs-down on Game of Thrones at the halfway point. I obviously can’t argue you out of that — and ultimately it’s a verdict on whether the creators have pulled off a very tricky adaptation, one that maybe had the cards stacked against it from the beginning.

All I can do is parrot the Starks, assure you that winter is coming, and hope that a few plot points that I know are ahead might yet convert you from newbie to a medium- if not necessarily superfan.

Game of Thrones Recap: A Newbie and a Superfan Debate the Season’s Halfway Point