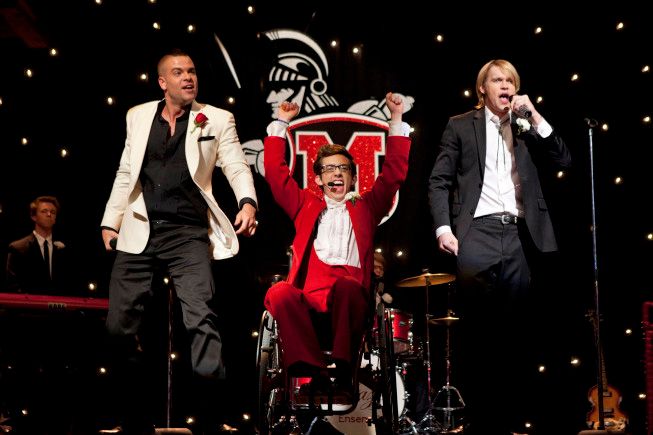 “Please tell me we’re not doing songs about prom,” says a beleaguered Sam at the beginning of this week’s episode. We echoed your thoughts, Froggy Mouth! Happily, the writers realized a theme this week would have proved disastrous. Without a forced, PSA-ish topic written on the dry-erase board, everything that usually irks us about Glee bothered us less this week: Sue’s absurd evil plans (perhaps because she finally got a slight role other than glee club tormentor — as prom coordinator); Kurt’s occasional martyrdom (thanks to some dependable Mike O’Malley and supportive Blaine); Rachel’s melodrama (because if any occasion merits drama from a teenage diva, it’s prom). The pace felt truer to real life, the adults were less involved, and the kids’ singing and acting took center stage. Oh, and Jonathan Groff appeared out of nowhere, in a doorway, wearing a scarf — at which point we almost died of happiness.

“Rolling in the Deep” (Adele)
Pizzazz: 3
Relevance: 9
Absurdity: 9
It’s junior-prom time (Hooray! We finally know these kids are juniors!), and since Figgins didn’t get his dream band, Air Supply, for the dance, he’s giving $400 to the glee club to perform, much to the chagrin of prom coordinator Sue, who has “in my Spanx at all times a list of the worst songs performed by the glee club” (we’ll very much give her “Run Joey Run” and the “Hair”/”Crazy in Love” mash-up). We see some endearingly spot-on scenes of the girls huffing over how prom is the most important night of their lives, lamenting how prom dresses look ridiculous on anyone who’s not a size two (it’s kinda true), and stressing over dates. Date-free Rachel and Mercedes propose a budget plan to Sam, which is actually fairly adorable and frees Rachel to immediately work on a song that will either be “brilliant or simply outstanding.” ENTER THE GROFF, DOORWAY LEFT. Rachel is in dramatic puppy-eyes mode; Jesse is back in all his preening glory, and, though it’s not quite perfect (it’s John Legend’s a cappella arrangement, and John Legend alone was preferable), it’s still quite a match of vocal wonder — and thematically appropriate, to boot!

“Isn’t She Lovely” (Stevie Wonder)
Pizzazz: 4
Relevance: 8
Absurdity: 5
The boys are all in major apology mode this week. Jesse suddenly owns up to the egging that baffled us all (“I traded love for a fourth consecutive national championship. It was a bum deal. For a first, maybe, but not for a fourth”); Karofsky is melting, apologizing, genuinely for the first time, to Kurt; Finn is, of course, once again pining for Rachel; and most of all Artie’s regretting calling Brittany “stupid.” Not convinced by Puck’s plan to impress her by spiking the prom punch, he does what we wish all high-school boys would do: serenades her in home-ec. Britt refuses in her deadpan, awesome way — “I’m gonna go by myself, and work on me, and dance in people’s faces” — but Artie’s solo with kitchen percussion is a fine moment for soul brother Kevin McHale anyway. Props to the writers for keeping this charmingly simple and resisting the urge to use the always-available McKinley jazz combo.

“Friday” (Rebecca Black)
Pizzazz: 9
Relevance: 7
Absurdity: 4
We were truly worried by the viral hit’s presence on this week’s song list, and we’re still not quite sure whether, performed in Glee’s context, it constituted a win or epic failure. It’s tough to believe Puck, professed badass that he is, would stoop to sing this ridiculousness. Then again, there’s a certain Chippendales-y appeal to Puck and Sam totally embracing said ridiculousness. We’re no longer in high school, but we’re guessing the Teenager of Today would unashamedly rock out to it at prom — and seeing everyone’s very individual dance moves (especially Santana and Karofsky doing the classic Side-by-Side Awkward Shimmy) nudges this farther toward endearing rather than irritating.

“Jar of Hearts” (Christina Perri)
Pizzazz: 3
Relevance: 8
Absurdity: 3
It’s one of those weeks when we come out on Rachel’s side, and not just because of her fairly cute pink prom dress. She’s ever the dependable drama queen when it comes to Finn — giving him detailed corsage advice before nobly informing him she’s “dying inside” — and all too believably drawn into the minute Jesse gives her attention again. Needless to say, though we unequivocally support Rachel and Jesse, both boys have treated Rachel like a disposable and desperate girl, so it’s a welcome twist to notice that, even as Rachel seems to be singing this ballad to Finn, she could just as well direct its message to Jesse. In the end, we prefer Lea Michele’s straight take to the original — and unlike Christina Perri’s video, it involves no creepy interpretive dance!

“I’m Not Gonna Teach Your Boyfriend How to Dance With You” (Black Kids)
Pizzazz: 8
Relevance: 6
Absurdity: 6
Forgetting for the moment that it’s bizarre for Blaine to sing at a different school’s prom, we’ll hand it to Darren Criss for continuing to own two categories of tunes — skeavy Cobra Starship–esque electro-pop and white-boy soul, which are somehow combined in this track. Tina and Brittany get at least a third of the credit for their sassy backup-singer ways.

“Dancing Queen” (ABBA)
Pizzazz: 4
Relevance: 8
Absurdity: 4
We somehow forgot that the prom episode would of course address an issue recently very much in the news — gay kids getting to go to prom with dates without getting harassed — and it’s a relief to see that Kurt’s treated as something more than a tragic symbol in this context. He’s the innocent, thrilled to have a boyfriend to bring, throwing caution to the wind with a stellar ensemble honoring “the royal wedding and the late Alexander McQueen.” Blaine, on the other hand, sides with Mr. Hummel after suffering a beatdown at his own school. We know Kurt will pay for his blitheness at some point, but it’s not when we expect: All’s going well until prom queen’s announced and, surprise, Kurt is the write-in favorite. We expect him to own the moment immediately — so it’s especially affecting when Kurt’s usual confident facade crumbles, and he runs for the hills instead. He’s not the only one left feeling dejected at prom: Jesse and Finn get thrown out for an oh-so-wimpy shove fight (we rooted for Jesse); Quinn slaps Rachel in a moment far less dramatic than the promos made it seem; Santana worries that losing prom queen means the school knows she’s a lesbian (and we glimpse Brittany wearing a tiny hat!); and poor Artie’s the victim of an ill-conceived dental torture attempt by prom policewoman Sue. Even Kurt’s triumphant return to applause is a little difficult to believe — these kids go from humiliating him to applauding him in one heartbeat? All of which adds up to … sad Glee, our favorite kinda Glee, has returned! Which means everyone bands together in a thoroughly enjoyable musical moment at episode’s end, this time thanks to the winning sister team of Santana, Mercedes, and the song no one can resist dancing to. Balloons in the air! More Groff next week!