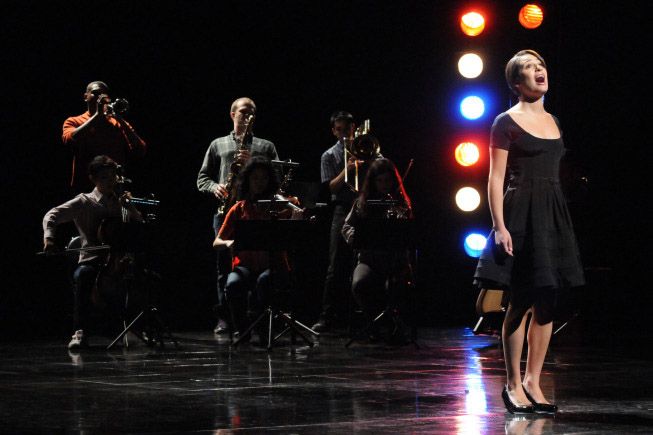 Well, here we are, treading water before Glee’s season finale: trotting out old/never-ending rivalries, rekindling Sue’s humanity, generally crying a lot. Going off to competition and meaningful lesson-learning go hand in hand on Glee, so this week abandoned any theme other than “nationals” in favor of lots of less-thematic-than-usual songs and an unexpected funeral for Sue’s sister (not Karofsky, Becky, Mr. Hummel, or anyone else previously rumored). The result is an episode that simultaneously feels as if lots and nothing happened — other than Jesse oh-so-masculinely clicking his boot heels, of course.

“Back to Black” (Amy Winehouse)
Pizzazz: 5
Relevance: 3
Absurdity: 4
Sans scarf but still devastatingly handsome, the Groff is now an official consultant to New Directions, and within the first five minutes of the episode he’s rattled off a series of insults to Finn that are harsh but sublimely true: “I don’t think I need to do much tricking to get you to do something stupid, Finn”; “You kind of sing and dance like a zombie who has to poop”; and “Most of the guys sing and dance better than Finn.” But they don’t have his ability to crookedly smile and look so charmingly confused all the time! Sorry, sorry: Jesse’s ways are rubbing off on us. In yet another difficult to swallow yet astute observation, Jesse recommends abandoning the group’s duet plan for a star performance, which necessitates cut-throat auditions that Jesse will co-judge. Oh dear, whoever shall win … the lack of suspense almost kills us. But in the meantime, it’s a nice excuse for the club’s best members to work it out onstage, starting with Santana, who’s a near vocal dead-ringer for Amy Winehouse and covers this tune with scratchy-voiced aplomb. Was Jesse right about her lack of full emotional commitment to the song? Well, perhaps partially — if only because it seemed like the first song in weeks she wasn’t singing to Brittany.

“Some People” (from Gypsy)
Pizzazz: 6
Relevance: 6
Absurdity: 4
In a welcome reminder that Kurt and Finn actually are stepbrothers now, the two band together to attempt to comfort an inconsolable Sue, who confesses that her latest rash of bad behavior — notably, cutting Becky from the Cheerios — is owed to her sister Jean’s death. As usual, shifting from wacky, insane Sue to emotionally in touch Sue feels a little like whiplash, and we’re just as stunned as poor Finn and Kurt by her feverish meaning of life talk (though her refusal of their flowers — “I’m allergic to pansies, and I don’t mean that as a swipe at either of you” — seems a bit truer to character). Meanwhile, Kurt returns to the Gypsy songbook, which has served him well in the past, for his audition, and it’s a respectably on-point choice. If not quite as emotionally urgent and perfectly placed as his “Rose’s Turn,” it’s a genuine expression of Kurt’s need to burst beyond Lima’s borders.

“Try a Little Tenderness” (Otis Redding)
Pizzazz: 7
Relevance: 5
Absurdity: 4
Revelation while in the midst of recapping: This song’s title is the exact opposite of Jesse’s approach to vocal coaching! While Jesse imagines himself the center of some sort of reality show, Mr. Schue grows weary of how he conducts auditions like the youngest member of Telsey & Co. (though again, Jesse makes one good point: Mr. Schue should comment more! Comments more constructive than “You used to be just great, but now you’re amaaaazing!”). Mercedes is already convinced Rachel’s getting the solo, but that doesn’t stop her from turning in one big “hell to the no” of a performance — definitely one of her fiercest so far, and, might we add, with a killer New Orleans–funeral-ish intro from the Random McKinley Brass.

‘My Man” (from Funny Girl)
Pizzazz: 6
Relevance: 9
Absurdity: 4
Has it really been two years since Glee’s beginning? So says Rachel as she nostalgically takes in the audition sign-up sheet. She also recalls the days when she had no bangs and still some semblance of baby fat (nicely done, writers!) and brings back the gold star that makes us nostalgic for how much better the show was back in season one. Well, no matter — we’re still here, aren’t we? Rachel seems confused about whether to pick Jesse or the ever-more-interested Finn, and we become even more pro-Jesse than before, when, after knee-jerk dumping Quinn, Finn condescendingly commends her on not quitting glee club on his account (we can’t wait to see how she surprises him in New York — hopefully with something more than her hot new short haircut). Needless to say, Rachel’s still got Finn on the brain during this classic Barbra showstopper. Still, Kurt said it best: Rachel can be annoying, but Lea Michele sure can sing. It’s difficult to take issue with anything about her performance, which, much like “Don’t Rain on My Parade,” is pure talent on display: just Lea Michele onstage, belting like there’s no tomorrow.

“Pure Imagination”
Pizzazz: 3
Relevance: 9
Absurdity: 6
A few major plot points felt a bit swept under the rug this week. Oops, Will’s kinda planning on trying out a move to New York this summer, post-nationals, that could turn permanent! Oh, and Terri’s moving to Miami — so she’s either a plot conflict neatly taken care of, or maybe not, what with her vaguely creepy good-bye? And then there’s the whole complicated issue of Jean’s funeral. We’re touched — mostly. Here we have a grand argument for the writers turning Sue a bit less toward the absolutely absurd in the next season. We’re so used to Jean appearing only in random moments when Sue needs humanizing that when something devastating actually happens, it’s difficult to totally buy into both Sue’s grief and the glee club’s immediate and total sympathy for her. But if this is the episode that marks the end of Sue’s purpose in life as New Directions tormenter, we’ll take it.

last night on late night 2:31 a.m.
Billie Eilish Brings ‘Your Power’ to the Desert for The Late Show Try not to forget your sunscreen.
future nostalgia Yesterday at 11:51 p.m.
Kevin Smith Wants to Remind Everyone He Coined ‘Bennifer’ the First Time Around Do the children know about Jersey Girl?
cancellations Yesterday at 10:26 p.m.
Fox Tells Prodigal Son to Hit the Road After Two Seasons Having taught America an important lesson: never trust a serial killer, even if he’s your dad.
tv Yesterday at 8:43 p.m.
Eliza Coupe, Ginnifer Goodwin, and Maggie Q Are Pivoting to Fox Pivot!
casting call Yesterday at 7:23 p.m.
Reinforce Your Cable Knits: Dave Bautista Has Joined Rian Johnson’s Knives Out 2 Netflix also purchased Knives Out 3 in March, so fingers crossed his character makes it to the threequel.
theater review Yesterday at 5:51 p.m.
In Taxilandia, the Front Seat Is Stage, the Back Seat an Audience And the partition is the proscenium arch.
comedy review Yesterday at 5:27 p.m.
That Damn Michael Che Has a Good Heart. But … The sketch-comedy show is fun when it’s not second-guessing and overthinking itself into a liberal fog.
By Craig Jenkins
vulture lists Yesterday at 5:00 p.m.
Every Guy Ritchie Movie, Ranked Where does Wrath of Man fall in the director’s filmography?
glitz and glamour Yesterday at 4:32 p.m.
Laverne Cox Is the New Host of E!’s Red-Carpet Coverage Following Giuliana Rancic’s exit.
award shows Yesterday at 3:59 p.m.
NBC Won’t Broadcast the Golden Globes in 2022 And Tom Cruise has reportedly sent his three trophies back.
iconic Yesterday at 3:36 p.m.
Ziwe Requires No Context Twelve moments from the Showtime series that should be viral right now.
By Zoe Haylock and Jennifer Zhan
overnights Yesterday at 3:36 p.m.
90 Day Fiancé: Happily Ever After? Recap: The Writing on the Wall Tiffany might need to accept that what’s best for her kids is riding solo.
snl Yesterday at 3:24 p.m.
Elon Musk’s SNL Wario Was Weaponized Nothingness The biggest accomplishment of Musk’s SNL episode is how little there is to say about it now.
By Kathryn VanArendonk
comedy Yesterday at 3:02 p.m.
John Mulaney and His Wife, Annamarie Tendler, Are Divorcing Who will have custody of Petunia?
posthumous releases Yesterday at 2:34 p.m.
A Posthumous DMX Album Is Out This Month, Produced by Swizz Beatz “The legacy continues.”
alexa play chasing cars Yesterday at 2:24 p.m.
Death, Taxes, and Grey’s Anatomy Will Continue Into 2022 With Ellen Pompeo, of course.
my music documentary is dropping Yesterday at 2:21 p.m.
Part-Time Basketball Player J. Cole Drops New Music Documentary It arrives ahead of his upcoming album.
quar goss Yesterday at 2:00 p.m.
Jennifer Lopez and Ben Affleck Went to Montana Alone for a Week, As Exes Do “The chemistry is unreal,” per an E! News source.
cinema! Yesterday at 1:55 p.m.
Leo and His Center Part Star in Killers of the Flower Moon’s First Look Time to start the Oscars watch.
another one Yesterday at 1:42 p.m.
DJ Khaled’s New Music Video Stars Justin Bieber and a Fake Alligator Another Khaled Khaled video after another No. 1 album.
More Stories