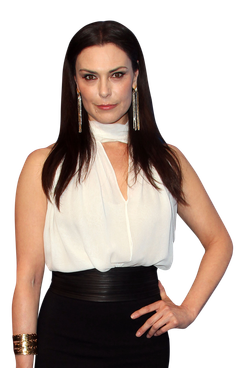 Over her almost-25-year career, Michelle Forbes, the Texas-bred actress, has popped up in pretty much every conceivable genre of television — sci-fi (Battlestar Galactica), camp fantasia (True Blood), action (24), drama (In Treatment), comedy (Seinfeld). These days, the perennial guest star can be found in another drama, AMC’s The Killing, playing Mitch Larsen, the glassy-eyed, grief-stricken mother of a murdered girl. Vulture asked the 46-year-old ex-punk rocker to walk us through her wily, winding career.

When was the last time you were recognized?
The other night at a restaurant one of the servers was glaring at me, and I thought What have I done? He’s like, “Ohmygawd it is you from True Blood. You scared me so much.” With Maryann [True Blood’s maenad], I think a lot of people tended to get scared by my presence. I had no idea that’s what we were doing — I thought she was hilarious.

Speaking of debauchery, what was it like moving alone to Manhattan’s East Village when you were just 16?
I went to New York on a holiday, and I just ended up staying there. It was pretty brutal in those days. Being an old punk rocker, I pulled a lot from that period for Maryann. That whole period was just about breaking down boundaries and pushing the envelope of morality. New York is so different now. I barely recognize it. There were buildings that were burnt out and boarded up, and there were burning trash cans and rats running through the streets.

There are still rats!
When I was shooting The Killing, I was living in this fantastic little loft in [Vancouver’s] Gastown. It was this old brothel with a breezeway by the entrance. I walked into the breezeway one evening and a rat sort of raced at me. And I thought, Aw, it’s just like New York back in the day. I felt weirdly nostalgic.

On The Killing, we’re starting to see a change in your character, Mitch — maybe something darker?
I think what was good about Mitch’s journey is that she’s not only dealing with the gutting heartbreak of losing her child, but she also starts to be betrayed by everyone around her. She starts to realize that everyone is lying to her on some level. And it’s maddening. You can’t get to the bottom of your grief and find any closure, because you have to deal with yet another betrayal.

So where is this leading?
I can’t give anything away. I must tell you that once we finished filming, I went into voluntary amnesia.

You have to do a lot of crying for the part. What do you think about to get the tears going?
I don’t have kids, but you think about your daughter being stolen from you. There were times I couldn’t stop crying. Loss on any level can be paralyzing. In a strange way, that’s far easier to play than, say, Maryann, who is completely in her bliss. I think that’s more foreign for us than wrapping your head around sorrow. That is a very comfortable emotion for us. We all say we want to be happy, but if that was really offered to us, how terrified of it would we be?

You’ve come a long way since landing your first role, on Guiding Light, in 1987. How did playing a schizophrenic Venezuelan psychiatrist prepare you for this career?
[Laughs.] I do recall I ran around in a Catholic-school uniform quite a bit. Um, and I had a cigarette and a gun inside the uniform. And there was a goat on set for some reason. He came over and started urinating on my shoe. I remember thinking, Is this really the path you wanna go down? And I said, “Yes, yes it is!”

You’ve also appeared on Lost, Battlestar Galactica, and a couple of Star Trek series. Is it safe to say you have a geek following?
I guess so. It’s an odd thing, because people equate me with the sci-fi world, but in truth, I’ve only done fourteen hours of science fiction. I think the sci-fi fan base is so massive and so committed. Some [encounters] are ultimately embarrassing. Once, this person got down on their knees, and I was like, “Oh my God! Get up!” At a convention you would expect that, but this was so bloody random.

As a veteran of television, are there series that you’re pretty addicted to yourself?
I think one of my favorite shows right now is that damn Community! Oh my God, where did that come from? I don’t know who Dan Harmon [the creator] is, but he is my new hero. I met that cast at an awards show, and I loved each and every one of them. Both the paintball episodes were just fantastic! Those writers are such wonderful nerds, and they’re obviously movie geeks. And the show sort of came out of nowhere, didn’t it?

Michelle Forbes on The Killing, Rats, and Her ‘New Hero,’ Dan Harmon

my single is dropping 1:28 a.m.
Juice WRLD’s Latest Posthumous Track, ‘Smile,’ Featuring The Weeknd, Is Here Legends Never Die, indeed.
videology 12:40 a.m.
Cardi B and Megan Thee Stallion Show Off Their Mansion, Drip in Video for ‘WAP’ “There’s some h- -s in this house.”
bonus tracks 12:00 a.m.
Taylor Swift Releases Another Song Reminding You How Much She Likes England It’s appropriately melodramatic, paying tribute to the poets of the Lake District.
trailer mix Yesterday at 11:59 p.m.
Daniel Kaluuya is Fred Hampton in Judas and the Black Messiah Trailer The film reunites Kaluuya with his Get Out co-star LaKeith Stanfield.
verzuz Yesterday at 11:03 p.m.
Rick Ross and 2 Chainz Swap Bars, Employ Essential Workers in Verzuz Battle And by essential workers we do mean mask-wearing strippers.
overnights Yesterday at 10:30 p.m.
The Real Housewives of New York City Recap: Humpty Dance There are people who refuse to admit they’re wrong and then there is Dorinda.
i love the 80s Yesterday at 9:51 p.m.
Jennifer Grey to Have the Time of Her Life Once More in New Dirty Dancing Movie Nobody puts Baby in a corner… again.
bad ideas Yesterday at 7:43 p.m.
The U.S. Will Get Its Grubby Paws on Eurovision with ‘American Song Contest’ Because America famously doesn’t have enough singing competition television shows…
extremely online Yesterday at 6:06 p.m.
Here’s Who James Charles Is Apologizing to Today: Alicia Keys The makeup influencer subtweeted the launch of Keys’s beauty brand.
coronavirus Yesterday at 5:01 p.m.
Here Are All the Movies Delayed Because of the Coronavirus With updated release dates where available.
tv review Yesterday at 4:52 p.m.
Lower Decks Is Fun, But Star Trek Is Suffering an Identity Crisis For all its raucous pleasures, the new animated series maintains an ironic posture at odds with what made this franchise great.
covid filming Yesterday at 3:28 p.m.
The Good Doctor Is Doing a Coronavirus Episode, Once It Can Start Filming Production is currently stalled in Vancouver over testing concerns.
normal (attractive) people Yesterday at 3:25 p.m.
Paul Mescal Is Drunk and Hot in This New Rolling Stones Music Video Now here’s a Paul the Stones have no beef with.
genuine classics Yesterday at 3:16 p.m.
Agnieszka Holland Poured Her Own Bedridden Childhood Into The Secret Garden The 1993 adaptation is one of the best children’s movies ever made. We don’t talk about it, or director Agnieszka Holland, enough.
By Bilge Ebiri
extremely online Yesterday at 3:16 p.m.
Mariah Carey Put Her Son, Moroccan, in TikTok Timeout “I don’t know who you are, you don’t need to worry about me.”
two friends Yesterday at 2:43 p.m.
Only Andy Samberg Knows Who Is in Cristin Milioti’s ‘Incredible Coven’ They also discuss farts and buttholes.
our streaming future Yesterday at 2:29 p.m.
Will a Comedy Ever Play at a Movie Theater Again? Three writers wonder: Is 2020 the end of the end of laughing out loud at the cinema?
By Alison Willmore, Bilge Ebiri, and Jesse David Fox
wig Yesterday at 2:00 p.m.
HBO Dream Team Nicole Kidman, David E. Kelley, Wigs Return With The Undoing That hair is full of secrets.
this week in comedy podcasts Yesterday at 12:17 p.m.
This Week in Comedy Podcasts: Tim Heidecker Gets a Haircut on Office Hours Rounding up our favorite comedy podcast episodes of the week.
By
keke palmer Yesterday at 12:11 p.m.
Proud Family Revival Adds Keke Palmer As a Teen Activist Maya Leibowitz-Jenkins is 14 years old and ready to protest.
More Stories