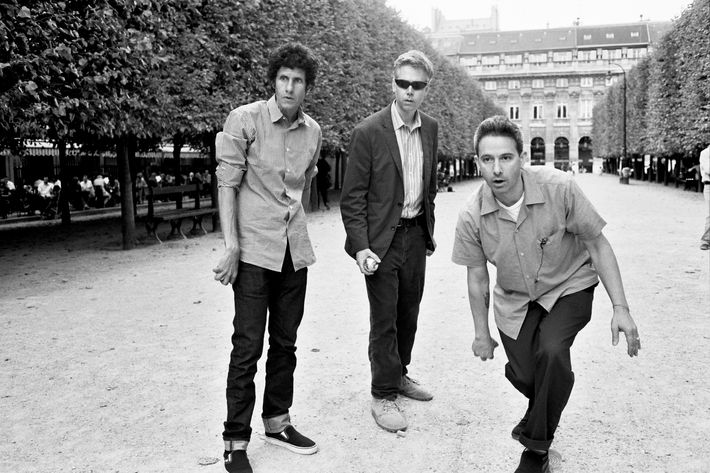 In last week’s issue of New York Magazine, we revisited the Beastie Boys first album, Licensed to Ill, 25 years after the fact. But the piece didn’t quite contain all the brilliant nonsense Mike Diamond and Adam Horovitz spewed in our expansive interview. So, to mark today’s official release of the Beasties’ latest, Hot Sauce Committee Part Two, a few stray bits and pieces — from firework parties to McNugget cars — left on the cutting-room floor.

Diamond, reminiscing on his Chinatown apartment from the early eighties: “I remember the main party we had was great Fourth of July rooftop party. At that time in New York City, I’d say in the month leading up to Fourth of July, basically through all of Little Italy there’d be four guys on every corner selling you fireworks. So anyway, we’re up there on the roof, good times, and then what happens, all these dudes in the neighborhood take all the fireworks that haven’t been sold and, just literally in the middle of Chrystie Street, they set up a couple of trash cans and start lighting everything up. Blowing shit up. The street wasn’t legally closed but there was no way you could drive down there. It was the best fireworks show — completely anarchistic, totally unscheduled — in history. I have to say, it was kind of magical.”

On Mojo, the bouncer famously terrorized in “Egg Raid on Mojo”: Horovitz: I’m just gonna say it. Mojo dressed like he was in the movie The Matrix. Diamond: And then he was into like the frilly pirate bullshit. He was all hard-core: He would always have the black bondage pants and the strap and be at every Stimulators show and Bad Brains and act all hard, and then all of a sudden we saw him at that club, Berlin, and he tried to act all like “I don’t even know you kids.” And he was dressed, like, in a crazy blouse.

On extracurriculars: Diamond: LL Cool J is very well known in Hollywood. He’s an established commodity across several platforms, including motion pictures. And, at one point, he had talked to Adam about trying to bring him into the fold. Horovitz: In what capacity I don’t remember. Diamond: And, somehow, nothing ever happened. Horovitz: I might have dropped the ball. I think I was supposed to call him. But also he stole my workout secrets. That’s where I thought you were going with this.

On a McNuggets car: Horovitz: Check this out. McDonald’s should make a car, like a smart car, and call it the McNugget. And it should run on French-fry oil. Diamond: Adam, I think you should take a meeting. Horovitz: Or sell it to Burger King and call it the Whopper Jr. Diamond: Well, I think that’s a threat. You pitch it to McDonald’s, and say, “Listen, I’m gonna leave this with you for 24 hours, after which point this car will be renamed the Whopper Jr. and it’s going to belong to your competitors.” Horovitz: “I talked to Dave at Wendy’s, he’s interested … “

On Hello Nasty: Horovoitz: We had a practice space in a basement-basement. Sub-basement. Diamond: Over on Mott Street. At the time, there were a lot of other bands there: Moby, Sonic Youth, Blonde Redhead. So whatever, it was a downtown New York thing — but it was really bummy. Horovitz: It was nasty down there. You could see mold growing. We recorded all of [Diamond alter ego] Country Mike there. That was to go with our movie that we wrote. We were gonna make a movie, and Country Mike was a big part of it. He was like a third of it. It wove into all these different characters, but it kind of kept coming back to Country Mike. I don’t really remember how it all went. It was all ready to go and it fell apart. We decided not to do it. It’s one of those things where ideas is better than the actual product. Horovitz: Musicians can be strange. We were at the studio for Hello Nasty and the Biz [Markie] was supposed to come to the studio. He calls to say, “I’m downstairs, I’ll be right up.” We didn’t hear from him for another year.

On Hot Sauce Committee Part Two: Horovitz: Mike’s been changing his name a lot. Diamond: I have a lot of names on the new album. Horovitz: A lot of descriptive words before Mike D. Pretty Mike D, Big Mike D, Sweet Mike D, Honest Mike D. Sweet Lou. I made a list of all of them, but I don’t know what I did with it. You should dress up in all your different-name characters. Diamond: We actually kept trying to come up with a dress code [for the studio]. Horovitz: Well, I came up with one that I thought was really good but it got nixed, which was the incognito look. Diamond: Incognito was good, but it was so much work. Horovitz: I showed up to the studio one day with a moustache, and like a Mets windbreaker, and my Mets ’86 champions RC Cola bag, and some other fucked-up shit. The idea was you’ve achieved the look if your friends and family didn’t recognize you.

On what’s next: Diamond: We have an app-incubator company that we started. A lot of cats, kicking around ideas. We also have an artisanal … Horovitz: deodorant company. It’s local. All local. Diamond: I was gonna say artisanal kielbasa and lemonade truck. Horovitz: I’m starting a steak truck. Steak-n’-a-Cup. Diamond: Head to tail? Horovitz: My other one is Adam’s Rib. Come onnnn. Diamond: Just the one rib? Horovitz: You can get as many ribs as you want.

last night on late night 3 mins ago
Lady Gaga ‘Never Met’ Jared Leto While Filming House of Gucci “I was always with Paolo; he was always with Patrizia.”
role call 21 mins ago
Julie Delpy Answers Every Question We Have About 2 Days in Paris On tricking studio executives into making movies, dodging the word “crazy” throughout her career, and why she thinks she might be Larry David.
By Rachel Handler
vulture 10x10 21 mins ago
The EGOT Puzzle 12-Across: The Peter ___ (because “Spidey sense” is so 2002).
last night on late night 11:43 a.m.
Paris Hilton and Jimmy Fallon Go Ape for Print Outs of NFTs A physical copy of a jpeg that Hilton owns (a link to).
look out! 11:00 a.m.
Sam Raimi’s Spider-Man Movies to Swing Onto Crackle For Free He’ll arrive just in time for February.
superlatives 10:55 a.m.
Carl Barât on the Most Anthemic and Agonizing Music of His Career “Well, from my view, I thought everyone would be dead.”
By Devon Ivie
book excerpt 8:00 a.m.
Bad Reputation Accusations of copying dogged James Dean’s brief career, in part because they were true.
By Isaac Butler
choices 2:13 a.m.
Neil Young Says Spotify Can Have His Music or Joe Rogan’s Vaccine Misinformation “Not both.”
sundance 2022 12:43 a.m.
Evan Rachel Wood Says She Was ‘Raped On-Camera’ by Marilyn Manson “I was coerced into a commercial sex act under false pretenses.”
remakes 12:02 a.m.
Disney’s Live-Action Snow White ‘Makes No Sense’ to Peter Dinklage “You’re progressive in one way, but you’re still making that fucking backwards story of seven dwarfs living in a cave together.”
overnights Yesterday at 10:30 p.m.
Summer House Recap: Red, White, and Lewd It’s the Fourth of July, and everyone is doing their patriotic duty by trying to get laid or having relationship drama.
overnights Yesterday at 10:25 p.m.
The Gilded Age Series-Premiere Recap: Keeping Up With the Astors The long-awaited The Gilded Age has arrived, and we’re jumping into a charming era of corruption, greed, corporate monopolies, and industrialization.
the gilded age Yesterday at 10:00 p.m.
Did You Know This Is a Gummer? One crucial thing to consider about The Gilded Age.
the law Yesterday at 9:03 p.m.
Cardi B Wins $1.25 Million in Defamation Lawsuit Against Tasha K The rapper had testified that the blogger’s claims made her feel suicidal.
overnights Yesterday at 9:00 p.m.
Below Deck Recap: Testy and Tacky It’s the last charter of the season, and the crew is over it!
this! is! huge! Yesterday at 7:30 p.m.
Amy Schneider Achieves Jeopardy!’s Second-Longest Winning Streak 39 games later!
red table (taylor's version) Yesterday at 6:47 p.m.
Taylor Swift’s Songwriting Skills Are a Blur to Damon Albarn “Your hot take is completely false and SO damaging,” she responded on Twitter.
cut to the feeling Yesterday at 5:54 p.m.
Now We Know Who Would Win If James Bond Fought a Ring Light Daniel Craig met his match during a Zoom interview.
chat room Yesterday at 5:47 p.m.
Euphoria’s Eric Dane Is Building ‘Cal 2.0’ “Last year, Cal was very contained, very protected, very cautious. This season, he gets cut loose a bit.”
disrespect the classics Yesterday at 5:33 p.m.
Eric Clapton Thinks We’ve Been Hypnotized Into Getting Vaxxed And it’s his “calling” to talk about it.
More Stories