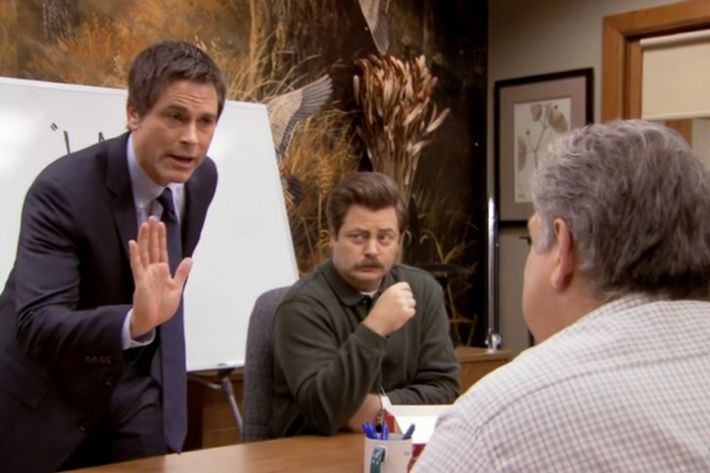 Workplace sitcoms, even whip-smart single-camera ones, are static by design, meant to keep people in their places — the jokes rely on that predictability. Parks and Recreation has always been great about establishing its characters’ comfort zones just enough, then immediately pushing them out. The final two episodes of the third season, particularly the penultimate one, take that idea and run with it, literally shuffling the characters and knocking them all off-guard at the same time.

It’s Ann’s first day at city hall, but even with her firmly ensconced in the actual workplace of this workplace sitcom, she’s the picture of calm reserve and normality compared to her chums. As all new city managers feel compelled to do, Chris orders some changes in the department: Jerry is made head of PR and has to head up daily briefings. April is “promoted” from Andy’s assistant to be the entire office’s assistant. Ron’s office is converted into a public waiting room, while he is moved to the center of the office inside a round desk so he can see everyone and everyone can see him. (The scene of him swiveling in circles to avoid a complaint about the water supply is an instant inductee into the pantheon of classic silent Nick Offerman moments.)

Andy is no longer anyone’s shoeshine boy, for three weeks, upgraded to administrative assistant as he helps Tom digitize documents on the dreaded cold yet still humid fourth floor, which has an entire room full of knives confiscated from people who were trying to stab others on the fourth floor. Andy could not be more thrilled, as he gets to wear a short-sleeve dress shirt and a tie like Sipowicz, and more important, a name tag, even if the phone does smell like a butt. But Tom is horrified, not just afraid of the crime and the old ladies like Ethel and Muriel who are resistant to his charms, but by the drudgery of the assignment. Donna gets some sort of wacky new ergonomic keyboard or something. (I don’t know, they need to start doing more with Donna.)

Leslie, however, is feeling resistant to the notion of change at this moment. She and Ben are enjoying the rush of their mostly secret relationship’s first uncomplicated days — “the bubble.” Which bursts the moment she learns that Ben has a meeting with her mother. With his shirt covered in coffee, Ben reverts to “Ira and the Douche”–caliber stammering, caving so quickly and meekly to Leslie’s mom’s request for four new school buses that she quickly ups the order to ten. Leslie provides him with a list of her 100 favorite conversation topics. Emboldened, he barges into her office to renegotiate and does a little too well, earning not just her respect, but her hand on his thigh.

Ron also resorts to some tough negotiation tactics as he tries to tell Chris that his attempt at efficiency doesn’t factor in the human element: Jerry can only work with no one watching, while Tom is the opposite and can only succeed when there’s someone he’s trying to impress. Chris won’t budge on his strategy, so Ron jumps on the grenade, offering to stay at his swivel-command center longer so that everyone else can go back to their old jobs. Leslie comes clean to her mom about her relationship with Ben, and status quo is restored. But not for long …