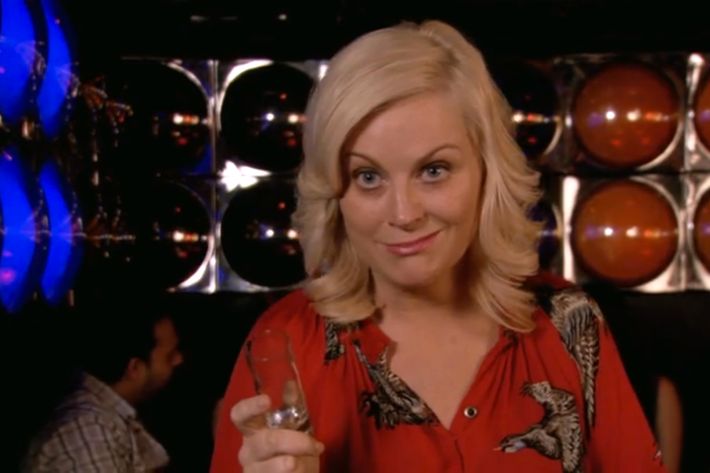 It’s a fluke of scheduling — and residual messiness from NBC’s mid-season foolishness, which is still irritating nearly a near after the fact — that two distinct episodes of a show get crammed together into one night. After that long drought, this race to the finish before the end of the third season almost feels like an embarrassment of riches. Then again, this is why steakhouses have dessert menus. Embarrassments of riches are delicious.

In the first episode, some stuff happens, then everyone gets really drunk and Ron Swanson dances and Andy pukes while running. Not really sure what else would need to be recapped, or what else one would need to hear to be convinced that this is something worth watching, but I guess I’ll keep going anyway. Tom has a guerrilla marketing plan in mind for the launch of his new Snake Juice Kahlua–like liquor (140 proof, with plenty of caffeine and other stuff) at the Snakehole. He provides scripts for everyone so they can all slyly, organically, promote the non-boring taste of Snake Juice, but Andy and April take the subterfuge and role-playing even further, dusting off their old Janet Snakehole and Bert Macklin FBI alter egos for the mission.

Because Leslie is tired of having to catch up with the details of Ann’s increasingly hectic dating life over coffee on a bench in City Hall, she impulsively puts Ann’s name in for a newly vacated PR position, despite the fact that she’s … a registered nurse. (Also, firing Dennis Cooper seemed impulsive, and that sign campaign against his Chlamydia-ridden wife showed some real media savvy.) While it’s fairly obvious that the writers’ room has run out of ways to keep Ann in story lines, this doesn’t make a terrible amount of sense. Ann doesn’t think so, either, and shows up at the Snakehole instead of staying home to read the reams of material Leslie gave her to study for the next day’s interview.

And if there are two things that can exacerbate tensions between two best friends, it’s fortified alcohol and the Douche, both of which are in great supply at the Snakehole. Ron is shocked to find he actually likes Snake Juice, costing him the chance to shave Jean-Ralphio’s head, an experience that would have inevitably inspired a rap with one syllable too many. And with the exception of designated-driver Donna, who’s in the pre-broth stage of her cleanse, everyone gets stinko. Ann and Leslie fight. Ben says, “Baba Booey.” Janet Snakehole and Bert Macklin continue a dangerous cat-and-mouse game, full of intrigue and fake accents. Ron cha-chas. Jerry gets tied to Donna’s roof. Then Chris kinda ruins everything by showing up and telling Tom that e-mailing the entire Pawnee government to ask them to come out and support his business venture is a violation of ethics, and he must cut all financial ties to the club.

Snake Juice may not be, as Donna suspects, rat poison, but it definitely leaves a mean hangover. April’s pillow-around-the-head technique may not be effective, but it still looks smart. Ron’s burger cure seems to yield better results. April doesn’t want to let Janet Snakehole go, but Andy is too wrecked to play along. Chris Pratt’s talent for pratfalls — I swear, I didn’t even mean to do that — is a card the show’s been playing with for a while, but the running-puke gag is a nice addition to the arsenal. Oh, and Ann and Leslie make up because Ben says nice things and then Ann winds up taking the PR job a couple of days a week despite being a nurse and not a publicist while also pulling things out of people’s butts in an emergency room because oh why not.