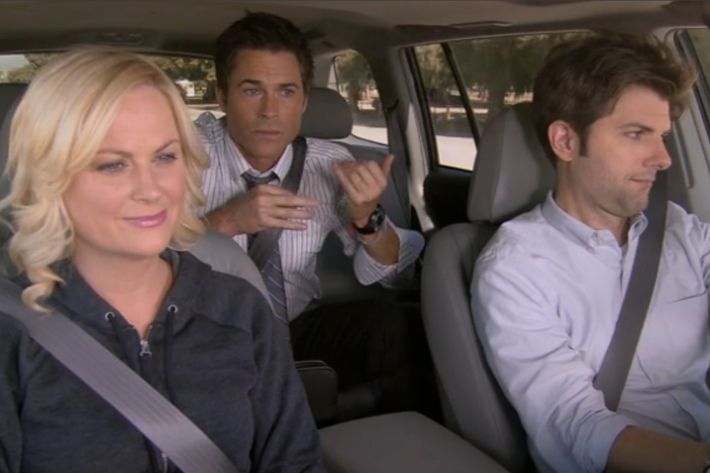 If the first episode was mostly drunk gags with a shred of story, the second episode dives full-on into the Ben-Leslie (Beslie? Len? Lesjamin?) morass and sets up Chris as maybe a little bit more of a stooge than we’ve seen before. Leslie has decided that she needs to avoid spending any close one-on-one time with Ben, lest she jeopardize both their jobs, which is why it’s so perfect that Chris sends them to Indianapolis together to lobby for a baseball tournament. Ann helps Leslie prepare for a decidedly unsexy car ride by making a mixtape of whale noises and something called “Banjo Boogie Bonanza.”

Tom — clearly having learned his lesson about using his government position to launch absurd entrepreneurial ideas — has April, Andy, Jerry, and Donna be test contestants for his Newlywed Game knockoff, Know Ya Boo. While Jerry and Donna seem to know each other’s smush preferences like a married couple, the actual married couple is flailing. Andy is devastated to learn that April has it bad for Jeff Mangum, and what follows is not just a brief mention, but an honest-to-God, pertinent-to-the-plot discussion of the merits of Neutral Milk Hotel, a genuine underground cultural watershed moment not seen on an NBC sitcom since Judge Harry Stone sentenced that kid for shoplifting the Double Nickels on the Dime cassette, or the time Theo Huxtable briefly joined Bad Brains, or when Henry Rollins guest-starred on the second episode of The Paul Reiser Show.

Ben wins over the bigwigs in Indianapolis with a moving speech about how great a community Pawnee is, as Leslie stands next to him basically melting. They go to dinner to celebrate the successful presentation, and Ben lays out his crush there, sending Leslie running to call Ann to talk her down. But she decides she’s going to make out with his face anyway, Chris or no Chris, and returns to the table to find … Chris. Who then insists they stay at his place rather than drive back or stay at the romantic hotel. Here’s where the character’s eccentricity gets the better of things: Quirky is fine, but his obliviousness to Ben and Leslie’s situation just seems off. Or maybe this is just another case of a show hitting so many perfect notes that the slightest deviation seems off-key. After all, the town’s cutest ER nurse took a publicist job in City Hall just to be around her pals, so as depictions of government employees at work go, this doesn’t have to be The Fog of War.

But all ends well, as things must end in Pawnee, because that’s just what feels right. April goes to Ann for advice about Andy and proves her allegiance to Mouse Rat by singing with the other three band members in the City Hall courtyard. And Leslie gets a note to come to Chris’s office, only to find that Ben has summoned her there, and he kisses her, and admit it: You made a little noise with your throat when that happened. And that’s all right.

my music video is dropping 10:56 p.m.
Kanye Takes Flight in New Visual for Donda Track ‘24’ The song features the Sunday Service Choir.
the law 9:32 p.m.
T.I. and Tiny Will Not Be Charged for Sexual-Assault and Drugging Claims Because of the statute of limitations.
movie review 5:13 p.m.
Copshop Is a Nasty, Nutty Slaughterfest Gerard Butler continues to do the lord’s work.
By Bilge Ebiri
buffering 3:25 p.m.
‘Nobody’s Happy’: Broadcast TV Battles the Streaming Blues as Fall Season Begins “We all went from being the center of the universe to being a distant planet.”
overnights 3:13 p.m.
The Challenge: Spies, Lies & Allies Recap: Amber Alert It’s that time in the season when players are making poor decisions seemingly out of pure boredom.
director chat 2:00 p.m.
Sion Sono on Directing Nicolas Cage in His Samurai-Western Epic The prolific Japanese director on his first English-language film and the “surprises” that come with directing Nicolas Cage.
mama! 1:19 p.m.
Hey, Mama! How to With John Wilson Season 2 Debuts This Fall Should’ve been called How 2 With John Wilson.
interview 1:18 p.m.
Activist Clover Hogan on Her ‘Deeply Upsetting’ Experience With The Activist Hogan decided not to join the much-criticized show after it unraveled during her casting process.
good one podcast 1:08 p.m.
Martin Short’s Life As a Sketch-Comedy God  The comedy legend talks late night, Only Murders in the Building, and more on Good One.
By Jesse David Fox
this! is! a psa! 1:07 p.m.
The Prodigal Son Returns As Jeopardy! Host Ken Jennings will be temporarily hosting until the end of the year.
emmys 2021 12:58 p.m.
The 2021 Emmys Will Actually Be Easy to Stream. Here’s How. Congrats, cord cutters!
overnights 12:48 p.m.
American Horror Story: Double Feature Recap: Pottery Barn Hell Baby Eli is barely five minutes out of the womb, and his sister is chomping his foot, and his mom is turning into a Pale Person? Tough break, kid.
role call 11:30 a.m.
Richard E. Grant Answers Every Question We Have About Spice World On meeting Roger Moore and Meat Loaf, the biggest trailer of his career, the Spice Girls’ improv skills, and all the costumes he kept.
By Nolan Feeney
book review 11:00 a.m.
In Chang-rae Lee’s My Year Abroad, There’s No Escaping the Self The novel by Chang-rae Lee turns a coming-of-age trope into something much more bleak and strange.
health 10:22 a.m.
Elton John Won’t Be Back on the Yellow Brick Road ’Til 2022 Due to Injury The pop legend will undergo surgery and physical therapy after hurting his hip in a fall.
backstories 9:36 a.m.
You’ve Never Heard Little Simz Like This The rapper breaks down every song on her career-redefining new album, Sometimes I Might Be Introvert.
By Justin Curto
altogether ooky 12:44 a.m.
Gwendoline Christie to Play a Very Tall Principal on Netflix’s Wednesday Plus, she’s got beef with Morticia.
last night on late night 12:27 a.m.
Watch the Return of James Adomian’s Glorious Mike Lindell Impression He had a busy summer.
lawsuits Yesterday at 10:45 p.m.
Judge Dismisses One of Marilyn Manson’s Sexual-Assault Lawsuits Three others remain on the docket.
accidents Yesterday at 9:26 p.m.
A Stairwell Collapse Endangered Reba McEntire, But She’s Okay! No serious injuries were reported.
More Stories