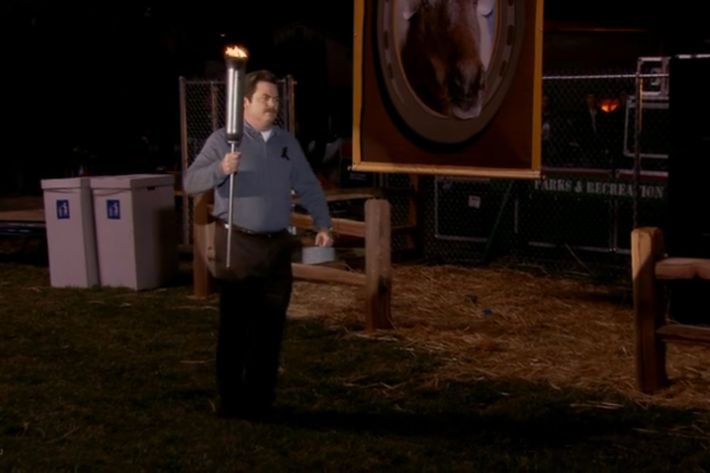 At least in terms of resolving and resetting narrative stakes, the most pivotal episode of the season was “Harvest Festival” — it was also the most complex and sprawling from a production standpoint. So it only stands to reason that the finale to the season in which the show went from mid-season question mark to bona fide (by NBC’s anemic standards) hit is a sequel of sorts. But while the last big Pawnee gathering was a triumph of community spirit and city planning, this is a somber affair.

Guys, there’s no good way to say this: See you on the other side, Li’l Sebastian. The passing of this beloved, well-hung Pawnee icon and the planning of his memorial service gala sets off a series of important life decisions for many of its key citizens. For Chris, a little tendinitis in his shoulder, perhaps owing to his 10,000 daily push-ups, is more than just a grain of sand in his microchip like a common flu, it’s a sign of his mortality and advancing age. Andy must step up to Mouse Rat’s greatest challenge: writing a tribute song for the horse that’s like “Candle in the Wind” times 5,000. Ron finds himself crying for only the second time in his life (the first came at age 7 after being hit by a bus). Tom’s entrepreneurial streak hits a rare logical patch, encouraging Jean-Ralphio to start his own production company, Entertainment 720 (because he’ll go around the world twice to serve his clients), and its first job is to produce the memorial.

For Ben and Leslie, however, this event just puts more pressure on their high-stakes, illicit office romance. Leslie sneaks off to meet Ben in their secret hookup spot in city hall only to find Ron waiting for her, asking how long she and Ben have been sleeping together. She stammers and denies unconvincingly until Ben walks in. No denial, however, is any match for the smoking gun that is the pocket-dialed voice mail on Ron’s phone that reveals the couple’s kinky yet historically informed Eleanor Roosevelt and Ruth Bader Ginsburg–themed role-play. Ron is genuinely concerned for their jobs and warns them to be careful, but that doesn’t stop them from getting busted canoodling at the memorial site by a custodian. They give the guy the rest of the day off as gratitude for his promised discretion.

But the custodian’s absence sets off a fateful chain of miscommunication and disorganization during the memorial. (Although Jean-Ralphio’s declaration, “Hope you brought a change of clothes because your eyes are about to piss tears,” is on the money, as ever.) Donna’s reading of the Italian poem isn’t as eloquent as Jerry’s would have been, but Jerry has to get propane for the eternal flame. He gets regular lighter fluid instead, though, which results in Ron — who was supposed to be laying a wreath — having his entire head engulfed in flames, burning off his eyebrows and singeing his mustache to a hideous charred brush. The indisputable high point: Andy and Mouse Rat’s chilling “5,000 Candles in the Wind” — certainly Chris Treager was not the only person moved to tears.

Despite all the chaos, the service is considered a resounding success. Back at the office, Leslie is approached by a committee looking for prospective city council and mayoral candidates. This is her lifelong dream come true, but with one caveat — she must come clean about any indiscretions in her past, but remains quiet about Ben. He can see Leslie’s face through the window and knows that something’s amiss; he may not know, however, that he’s about to get dumped, because if given the choice between her continued bubble and a chance at public office, that’s no choice at all. This is really the only thing that could spoil the budding relationship, and for all the softening of Leslie’s character, this at least is consistent with the Leslie Knope as established in the pilot: ambitious above all.

Ron is confronted by Tammy, but this reunion is overshadowed by her predecessor, Tammy I, waiting in his office. Even the fearless Tammy II turns tail and flees. (The first ex-wife is not visible to the camera — TV-ese for “Ah shit, we gotta cast someone even better than Megan Mullally but we haven’t gotten to that yet, everyone just hang tight.”) But the biggest change comes courtesy of Tom, who hands in his letter of resignation so he can work Entertainment 720 full-time. In true start-up fashion, he and Jean-Ralphio have scored a sweet white-on-white loft, complete with Ping-Pong table, pool table, and Detlef Shrempf shooting on retainer to shoot hoops all day.

As season finales go, this has plenty of cliffhangers, none of which, thankfully, are the fate of the show itself, unlike last year’s. In fact, for a cute, quiet, character-driven sitcom, I’d figure the suspensefully unresolved plotlines are on par with those of a season-ending Desperate Housewives, a show I’ve never seen. And it’s a fitting conclusion for a show that proved its mettle this year, taking the lemon that was the reduced episode order and turning it into lemonade by simply packing 22 episodes’ worth of quality into fifteen. (Like Andy, we like to think this metaphor applies to life as well.) As has been said here many times before, it’s a rare thrill to watch a show find itself in real time, but now that Parks has found its voice and its audience, maintaining that level is a whole new challenge. And throwing a soap opera’s worth of plot turns and monkey wrenches into the proceedings is as clear a sign you’ll need that the show is up to that. A year ago, the characters in Parks and Recreation were victim to obstacles thrown the show’s way; now the obstacles are provided by the show itself.

Parks and Recreation Recap: The Champion of Death

a long talk 2 mins ago
‘God, I’m crying over Kendall?’ A guided tour of Succession’s descent into birthday hell with director Lorene Scafaria.
drama kings 7 mins ago
A Guide to Selling Sunset’s Terrible Men Every single man on this show is responsible for stirring the shit these women have been swimming through.
the hoax 3:36 p.m.
The Big Questions Surrounding Jussie Smollett’s Hate-Crime Hoax Trial, Answered What is at stake for the former Empire star?
overnights 3:27 p.m.
Yellowstone Recap: You Can’t Wash Lonely Off We’re getting new characters and stories left and right, but it’s hard to commit to following through on any of them.
last dance 2:59 p.m.
Channing Tatum Won’t Stop Grinding Until Magic Mike’s Last Dance “The stripperverse will never be the same.”
extremely online 2:38 p.m.
At Twitter, @jack Is Out As CEO and @paraga Is In Maybe he can shave that beard now.
overnights 2:29 p.m.
RuPaul’s Drag Race U.K. Season-Finale Recap: Camp As Christmas A festival finale is a choice, but in the end, we have a great winner.
meme machine 1:46 p.m.
Best The Beatles: Get Back Memes: Pretend Brits, George Getting Upset “I need to break up the Beatles.”
chat room 1:15 p.m.
Selling Sunset’s Davina Potratz Swears People Actually Like Her IRL The reality show’s most misunderstood antagonist on returning to the Oppenheim Group, her relationship with Chrishell, and that $75 million listing.
close reads 1:04 p.m.
The Unbearable Sadness of Tom Wambsgans As Succession explores increasingly baroque ways to make nothing happen, one character is poised to break the cycle.
the law 12:30 p.m.
Ari Lennox Says She Was Racially Profiled Before Arrest in Amsterdam Dutch police claim she confronted an airline worker and was allegedly drunk.
the law 12:18 p.m.
Jussie Smollett’s Trial Begins in Chicago Today With Jury Selection The Empire actor’s trial for staging an allegedly falsified assault began on Monday with jury selection.
soul train awards 2021 10:57 a.m.
Maxwell and Ashanti Throw It Back With 2021 Soul Train Awards Medleys Maxwell earned the Living Legend Award, while Ashanti was named Lady of Soul.
offers you can't refuse 10:45 a.m.
A Way-Too-Long Cyber Monday Shopping List for Your Streaming Setup $1,100-dollar markdowns, here we come.
r.i.p. 10:09 a.m.
Aboriginal Australian Actor and Artist David Gulpilil Dead at 68 The Cannes Un Certain Regard Best Actor winner had a 50-year career in Australian cinema.
the law 9:34 a.m.
All Your Questions About Jussie Smollett’s Indictment and Trial, Answered The actor faces new charges that he “planned and participated” in staging a hate crime against himself last year. Here’s how we got here.
By Natalie Hope McDonald
advent calendar 8:00 a.m.
Vulture’s 2021 Advent-Calendar Gift Guide Something for everyone on your list (or at least everyone who owns a TV).
my merch line is dropping 8:00 a.m.
Celebrity and Pop-Culture Merch Worth Gifting This Year Just get the Bennifer stan in your life a gift card to Dunkin’.
soouuuuul train 1:22 a.m.
Watch Silk Sonic Thrive on the Re-created Soul Train Set Bruno Mars and Anderson .Paak in their natural element.
chat room Yesterday at 10:30 p.m.
Insecure’s Leonard Robinson Wants to Show You Taurean’s Softer Side “To be honest, I was kind of happy being the antagonist in the office. But at the same time, in all of season three, I don’t think I smiled once.”
More Stories