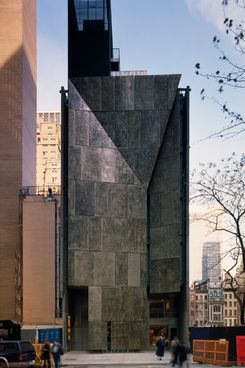 Last night, the American Folk Art Museum — that beloved, bedeviled museum on West 53rd Street — confirmed what many of us had feared for years. It is in such deep debt and has such low attendance numbers that it will sell its building and relocate back to a lobby space one sixth its current size near Lincoln Center. Sad as it is to say, this news comes as no surprise, and the culprit is the museum’s physical home.

Despite the many rave reviews the 30,000-square-foot building received when it opened in December 2001, it was immediately clear to many that the building was not only ugly and confining, it was also all but useless for showing art — especially art as visionary as this museum’s. In the past decade, AFAM has mounted shows of some of the greatest artists of the twentieth century, including Martin Ramirez, Henry Darger, Adolf Wolfli, and Thomas Chambers. Yet from the outside it looked like a bronzed Kleenex box or a miniature suburban professional building. The inside was worse. Dominated by showy staircases of many scales going in different directions, ill-conceived nooks and niches, the galleries were long narrow corridors or landings, sometimes only a few feet wide, making it impossible to see the art. The largest exhibition spaces had the look of a gloomy cloakroom. The architects responsible for this utter lack of imagination and hubristic mess of starchitectural vanity, Tod Williams and Billie Tsien, were praised for their intelligent use of materials. The building was called astonishing, a shrine, a temple, a Zen masterpiece. In reality, every one of their decisions reflected a total lack of feeling for, even a disdain for, art. Before he died, the Times architectural critic Herbert Muschamp, who’d said nice things about the building when it opened, confided to me that my loathing was “probably right.”

This terrible building will be sold to MoMA for an undisclosed sum. I can only imagine that MoMA will use the building for office space — perhaps freeing up much-needed room for its own sorely cramped permanent collection — or tear it down and start again.

We may be at the beginning of a long period of undoing, of rebuilding or destroying architectural failures. In the years to come, those who oversaw and built many new museums and museum wings will have much to answer for. During a period when the West accumulated more wealth than at any time in the history of the world, a vast amount of ill-conceived space for art was constructed, as institutions wasted their energy on atriums and useless entertainment areas. Books and dissertations will be written, panels will be convened, ridicule will be heaped, as our descendants look back at these atrocious buildings and wonder how so much went so wrong. The American Folk Art Museum will probably be the first to be razed, and not the last.

chat room 2:13 p.m.
Below Deck’s Rachel Hargrove Blames Her Red Hair for Her Season 9 Shenanigans The returning chef dishes on Captain Sean versus Captain Lee, working with Eddie, and why everyone loves Jake.
overnights 1:20 p.m.
Impeachment: American Crime Story Recap: Introducing Edie Falco We already know that Edie Falco can play a woman scorned, but it’s so good to be reminded.
1.5x speed 1:00 p.m.
Donna Tartt’s College Years (and 6 More Podcasts Worth Trying) What happens at Bennington does not stay at Bennington.
explainers 12:56 p.m.
Everything We Do and Don’t Know About the Fatal Rust Set Shooting When asked if Alec Baldwin would face charges, District Attorney Mary Carmack-Altwies said, ”no one has been ruled out at this point.”
movie review 12:37 p.m.
Cousteau and Me ‘Becoming Cousteau’ charts the legendary explorer’s life, but it strikes a note of despair.
to love and to shade 12:24 p.m.
Heather Rae Young and Tarek El Moussa’s Wedding Was a Subtly Shady Affair The Selling Sunset star and Flip or Flop co-host tied the knot on October 23.
trailer mix 12:14 p.m.
Pixar’s Lightyear Trailer: To Infinity and We Yawned And just to be clear, this “isn’t Buzz Lightyear the toy. This is the origin story of the human Buzz Lightyear that the toy is based on.”
music 12:00 p.m.
All Time Low Denies Allegations of Sexually Abusing Underage Fans The supporting acts for All Time Low’s current tour canceled their remaining dates.
streamliner 11:50 a.m.
13 Streaming Services Ranked by How Much They Love Halloween Yes, including “Peacocktober.”
this is halloween 10:57 a.m.
Doja Cat, Megan Thee Stallion, and More Horrifyingly Good Halloween Costumes Shout-out to all the glam squads.
solidarity forever 10:24 a.m.
IATSE and AMPTP Reach a Deal, Which Members May Still Reject A tentative agreement has been reached for the Area Standards Agreement, but the dust has yet to settle.
vulture recommends 3:33 a.m.
The Best Vampire Cop Show Ever Made (in Canada) No other Canadian vampire cop show comes close to Forever Knight, a ’90s cult hit about an 800-year-old homicide detective.
By Naomi Skwarna
endings 3:13 a.m.
The Best Line in a Vampire Movie Is in The Lost Boys “One thing about living in Santa Carla I never could stomach …”
one new voicemail Yesterday at 11:18 p.m.
Bill Murray Reveals He’s Joined Ant-Man and the Wasp: Quantumania Marvel called and Murray answered!
overnights Yesterday at 10:30 p.m.
Vanderpump Rules Recap: A Brock and a Hard Place I don’t know who in this trio is behaving the worst. Actually, I do, and it is Brock.
egot it all! Yesterday at 8:57 p.m.
Billy Porter Looks Camp Right in the Eye As Director for HBO Max Film Future EGOT winner Porter is ready to shine behind the camera.
controversy Yesterday at 8:17 p.m.
Netflix Suppressed Search Results for Cuties in Attempt to Minimize Backlash The streamer removed the film from search results and user home pages in response to the backlash.
theater review Yesterday at 8:00 p.m.
The Mother Just Wants What’s Best For You Have some Brecht, with Wooster sauce.
rip Yesterday at 6:02 p.m.
Legendary Comedian Mort Sahl Is Dead at 94 His political satire opened the floodgates for modern American stand-up comedy.
sultans of snub Yesterday at 4:48 p.m.
Mark Knopfler’s Rock Hall Feud Is Apparently Political A breaking development, three years later.
More Stories