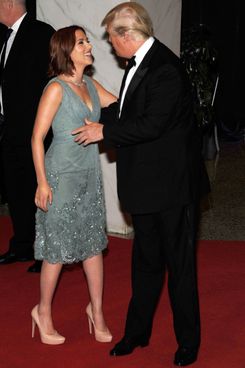 The White House Correspondents’ Dinner always makes for delightfully unlikely celebrity interaction, but Scarlett Johansson would like to clarify her animated conversation with the controversial Donald Trump. “Oh my God, I was upstairs on the red carpet and Donald Trump was there, and the last time I saw him, we did Jay Leno together, and my first thought was, ‘Oh, hi! I haven’t seen you since we did Jay Leno!’” she told Vulture on Saturday night. “And then I was like, ‘Oh my gosh. Here I am so happy to see Donald Trump and the whole press line just saw that.’ I mean, this whole controversy is so wild. All I could think to say to him was, ‘Wow, you’ve made some headlines recently, huh?’” Did Johansson regret the photo op? “I have no problem getting my picture taken with anybody, but certainly that whole situation is absolutely ludicrous.”

Johansson had brought her brother, Hunter, to the event, and both Johanssons were on the lookout for a certain CNN anchor. “I’m a Wolf Blitzer fan,” Johansson admitted. “I think he has a lot of integrity and I would like to meet him. I heard he was here. My brother was like, ‘I’m sure he’d be thrilled to meet you. He doesn’t know who any movie stars are.’ And I was like, ‘Oh great, I probably don’t have a chance.’” But would it freak out the newly redheaded actress (she’s dyed her hair for The Avengers) to meet her news-reading idol, we wondered? “No, I was nervous when I met Patrick Swayze. Wolf Blitzer, probably not.”

last night on late night 1 min ago
Laura Benanti’s Melania Trump Has Her Disney Princess Moment in Times Square Be best? More like high-B flat.
hollywood 6 mins ago
So You Want to Become a Working Screenwriter If screenwriting is your “spark,” what do you need to know? Soul co-writer Mike Jones explains the lessons he learned in the Hollywood trenches.
By Nate Jones
blimey 1:32 a.m.
Peaky Blinders to End After Season 6, But May Peakily Continue ‘in Another Form’ Innit.
benana split Yesterday at 11:31 p.m.
Please Let Us Know If You Rescued Ben’s Ana de Armas Cutout From the Trash We will pay any price.
monuments Yesterday at 10:49 p.m.
Trump Adds Walt Disney, Whitney Houston, Alex Trebek to ‘American Heroes’ Garden The president issued an amended executive order adding dozens of honorees to the monument park he announced this summer.
rupaul's drag race Yesterday at 9:04 p.m.
Drag Race to Put the ‘Roo’ in RuPaul With Australia and New Zealand Series RuPaul and Michelle Visage will join the judge’s table of RuPaul’s Drag Race Down Under.
pardon? Yesterday at 8:04 p.m.
Is Trump Really Going to Pardon Lil Wayne on His Last Day in Office? POTUS is allegedly preparing to issue dozens of pardons and commutations on Tuesday, so why not?
my album is dropping Yesterday at 4:52 p.m.
Weezer to Drop New Album OK Human Next Week A second album, Van Weezer, is scheduled to be released on May 7.
benana split Yesterday at 2:25 p.m.
Send Ben Affleck Some Dunkin’ Because Ana de Armas Reportedly de Dumped Him Our thoughts and prayers are with Ana de Armas Updates at this time.
q&a Yesterday at 2:00 p.m.
MLK/FBI Delves Into the ‘Darkest Part’ of FBI History Sam Pollard’s documentary chronicles the bureau’s yearslong campaign of governmental harassment, wiretapping, and attempted defamation.
cancellations Yesterday at 1:30 p.m.
Simon & Schuster Cancels Senator Josh Hawley’s Book After Capitol Riot Hawley has found a new publisher for his book in Regnery, which is distributed globally by… wait for it… Simon & Schuster.
now streaming Yesterday at 1:00 p.m.
The 30 Best Movies for Kids on Netflix The Princess and the Frog, Enola Holmes, The Willoughbys, and more.
overnights Yesterday at 12:54 p.m.
90 Day Fiancé Recap: Natalie Goes Full Villain We’ve reached the point where it’s no longer possible to give Natalie the benefit of the doubt.
the cayman islands Yesterday at 12:31 p.m.
Armie Hammer Says He’s ‘Genuinely Sorry’ for Calling Woman ‘Miss Cayman’ in Vid The Miss Cayman Universe Committee released a statement saying that it was “very disturbed by the video.”
overnights Yesterday at 10:03 a.m.
The Real Housewives of Atlanta Recap: Daddy Issues Cynthia wrestles with whether or not to invite her father to her pandemic wedding, while Kandi gets the girls together for a good cause.
vulture lists Yesterday at 10:00 a.m.
The 50 Greatest Western Movies Ever Made A hard look at one of cinema’s oldest genres.
vulture picks Yesterday at 7:30 a.m.
27 Notable New Releases Over the Next Two Weeks Frances McDormand’s Zoom talk show, a new Euphoria episode, the Anything for Selena podcast, and more.
birthdays Yesterday at 2:08 a.m.
Betty White Celebrates Her 99th With Carol Burnett Feeding a Baby Elephant Just because she’s almost 100 years old doesn’t mean the hustle stops for even a second.
quarantine baby Jan. 17, 2021
Jessica Biel and Justin Timberlake Confirm Arrival of Quarantine Baby, Phineas Apparently Ellen was one of the first people to learn of his existence.
overnights Jan. 17, 2021
Your Honor Recap: The Telltale Brain As the action shifts to Michael’s courtroom, his guilt tags along.
More Stories