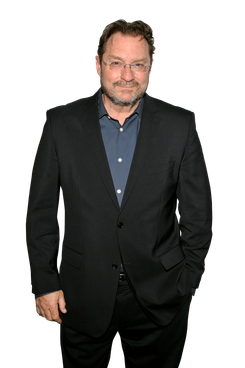 You may or may not know Stephen Root by name, but chances are good that you think of him whenever you see a red stapler. As put-upon office-supply-hoarder Milton Waddams in Office Space, Root became a folk hero to disenfranchised cubicle workers everywhere. In real life, Root may well be a hero to character actors everywhere: He’s remarkably prolific, yet has successfully resisted being pigeonholed as any sort of comedic or dramatic type. In the past twenty years, he’s become a go-to ensemble member for the Coen Brothers, Kevin Smith, Mike Judge, and anybody with a quirky hit TV show (True Blood, Justified, 24, Pushing Daisies). In 2011, Root has roles in Cedar Rapids, Robert Redford’s The Conspirator, and the Will Ferrell drama Everything Must Go, in theaters today. “I haven’t got a big role in it,” he told us. “But I just thought Will was so great in it. It’s a very low-key, Little Miss Sunshine–type role. Kind of serious for him, and he’s great. I hope people go see that one.” You’ll soon see Root in Kevin Smith’s Red State and Clint Eastwood’s J. Edgar. We spoke to him about his weird “eye thing,” the cult of the red stapler, and the likelihood that he’ll appear on Glee.

So: Do you never want to see another stapler at this point?
[Laughs.] I see at least two a week and sign them. I gotta tell you, they send red ones all over the place; I’ll go to different shows — I did Justified a couple of times, and on shooting day, I had four staplers in a box waiting for me. So that will never go away, and I don’t ever want it to go away.

Has Swingline asked you to be a spokesperson yet?
They have not, but I don’t know whether I want to go back into that. I’m happy that it’s its own little jewel and people keep rediscovering it in the cubicles every couple of years. That’s a nice thing.

One thing I noticed looking over your extensive résumé —
It’s only because I’m old.

Well, when I was looking at your reel, I kept going, “Oh, that was him!”
Well, that’s good! I mean, that’s kind of the point. That’s why I got into it as a character guy; you want to jump from thing to thing, immerse yourself in something and jump out again.

How deliberate are you about changing your physical appearance for a role?
When I get into a role, my physical appearance does change, but I’m not doing it consciously for the most part. John Lloyd [Conspirator] was a drunk and didn’t take care of himself, so that’s where my body goes. Unless I’m doing a limp or an eye thing — which I seem to be known for now.

By “eye thing,” you mean your squinty characters in Office Space and O Brother, Where Art Thou?
Yes, that’s just something that those roles required. Mike [Judge] wrote that into the Office Space character, and I literally had to wear contacts behind two-inch lenses to be able to see at all. I had no depth perception. Anything I had to reach on the desk, I had to practice four times. But that happened to come right next to the time I played the blind guy in O Brother, and that became the Year of the Eye.

Character actors usually tend to play specific types —
I certainly try not to!

You don’t. But in Hollywood, casting directors are always trying to pigeonhole everybody. Do you feel like the type they’ve tried to cast you as has changed over the years?
Well, I tried to change it myself at some point, because I’d done so much four-camera comedy in the nineties, I was kind of stuck there in casting directors’ minds. So by 2002, I said, I’ve just gotta stop doing four-camera for a while and let them see me do other things. It took a year of turning down comedy for them to go, “Oh, okay, he’s gonna turn that down. Let’s look at him for something else.”

That must have been tough to do.
It was an interesting time. But I was lucky enough to be able to do it because I had an income; I was still working on King of the Hill. [Editor’s note: Root voiced Bill Dauterive and Buck Strickland.]

Have you ever auditioned for a role that was described as “a Stephen Root type”?
Once! I saw a listing for a Stephen Root type, and we called and they said, “Uhh — not him.” [Laughs.] Okay, whatever. It’s a strange business.

I would like to state unironically that I really loved you in Jersey Girl.
Oh, Kevin [Smith, the director] will be so happy! Because I just did Red State with him, and we did some Q&As at Radio City and down in New Orleans, and he opened up with, “And here’s Stephen Root, who actually came back to do another movie of mine after Jersey Girl!” But I thought it was a cute, sweet movie. It got completely bashed, but I had a great time doing it.

How did the experience of making Jersey Girl compare to making Red State?
On Jersey Girl, he let me define the character. The very first scene we did, Kevin said, “What is your guy? What do you want to do with him?” I said, “I want to be the guy that says the most completely obvious thing. If the sky was blue, the guy would say, ‘You know, it’s blue up there.’ I want to be that guy.” So that’s what he let me be. But in terms of Red State, that’s a very tightly scripted movie. And it was shot for 4 million bucks, so we had time to do a couple takes and move on. I think Red State is his first really grown-up movie. I think it’s tremendous.

Have you and your wife [Romy Rosemont, who plays Finn’s mom on Glee] ever worked together?
Once we worked in a short together with Jane Lynch. And strangely, we were going to work together on Kevin’s Red State movie, and then she couldn’t because she had a commitment to Glee.

Are we ever going to see you on Glee? Do you sing?
I do sing — at least, I did Guys and Dolls in college! But I have no idea. I’d certainly be happy to, but that show is stacked with so many big actual stars that it seems unlikely.

Which role that you’ve played is most like Stephen Root?
Give me a second here. You know what was really close to me? This was years ago, but I got to play a priest on Northern Exposure. I was in a priest costume, but I said, “I’m not gonna do anything for this. I’m just gonna do me.”

So the most “you” character you’ve played is a priest in rural Alaska?
I think so. [Laughs.] That’s really what comes to mind.

two friends 3 mins ago
Jane Levy Gently Informs Jack Quaid That He’s a Hottie How does he not know?
good one podcast 8 mins ago
So, Was Trump Good for Comedy?  Six different comedians, six different answers.
By Jesse David Fox
politics 8 mins ago
What I Learned in the Late-Night Joke Mines Current and former writers reflect on trying to wring humor from the Trump administration.
By Megh Wright
snl 9 mins ago
The One Thing All Great SNL Political Impressions Need The show’s take on Joe Biden won’t be funny until it makes an argument.
By Kathryn VanArendonk
and i goop! 18 mins ago
Gwyneth Paltrow’s Vagina Candle Exploded There were “bits flying everywhere.”
vaccine watch 20 mins ago
All the Celebrities Who Have Received the COVID-19 Vaccine So wholesome.
By Gabrielle Sanchez
records on records 25 mins ago
Olivia Rodrigo’s ‘Drivers License’ Floors It to a No. 1 Debut Just like all the signs pointed toward.
rip 28 mins ago
Music Producer Phil Spector Is Dead at 81 Ex-wife Ronnie Spector remembered her “lousy husband” and the music they made in a statement.
across the aisle 10:35 a.m.
Garth Brooks Is ‘Rising Beyond Red and Blue’ to Perform at Biden’s Inauguration Give that man his guitar.
overnights 10:24 a.m.
Below Deck Recap: A Recipe For Drama Rachel crossed a line a while ago, and now there’s nothing fun about watching her dance on the other side.
last night on late night 10:10 a.m.
Kicked-Off Below Deck Guest Delores Says She Was Planning to Leave Anyway “The water was just beautiful. I don’t know what else to say.”
last night on late night 9:51 a.m.
Laura Benanti’s Melania Trump Has Her Disney Princess Moment in Times Square Be best? More like high B-flat.
hollywood 9:46 a.m.
So You Want to Become a Working Screenwriter If screenwriting is your “spark,” what do you need to know? Soul co-writer Mike Jones explains the lessons he learned in the Hollywood trenches.
By Nate Jones
blimey 1:32 a.m.
Peaky Blinders to End After Season 6, But May Peakily Continue ‘in Another Form’ Innit.
benana split Yesterday at 11:31 p.m.
Please Let Us Know If You Rescued Ben’s Ana de Armas Cutout From the Trash We will pay any price.
monuments Yesterday at 10:49 p.m.
Trump Adds Walt Disney, Whitney Houston, Alex Trebek to ‘American Heroes’ Garden The president issued an amended executive order adding dozens of honorees to the monument park he announced this summer.
rupaul's drag race Yesterday at 9:04 p.m.
Drag Race to Put the ‘Roo’ in RuPaul With Australia and New Zealand Series RuPaul and Michelle Visage will join the judge’s table of RuPaul’s Drag Race Down Under.
pardon? Yesterday at 8:04 p.m.
Is Trump Really Going to Pardon Lil Wayne on His Last Day in Office? POTUS is allegedly preparing to issue dozens of pardons and commutations on Tuesday, so why not?
my album is dropping Yesterday at 4:52 p.m.
Weezer to Drop New Album OK Human Next Week A second album, Van Weezer, is scheduled to be released on May 7.
benana split Yesterday at 2:25 p.m.
Send Ben Affleck Some Dunkin’ Because Ana de Armas Reportedly de Dumped Him Our thoughts and prayers are with Ana de Armas Updates at this time.
More Stories