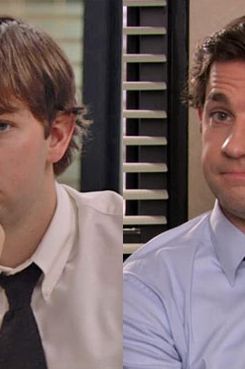 Steve Carell left The Office at exactly the right time: The show, slated to come back for another year, has already shifted from being The Michael Scott Buffoonery Hour to a true ensemble piece full of three-dimensional people  and Creed (but we wouldn’t have him any other way). And as we move forward into the Carell-less void with them, it seems only fitting to look back at how far they’ve come, not just emotionally, but also physically and sartorially. Remember Jim’s boyish bangs? Kevin’s cranial tuft? That time they had to blur Meredith’s boob and crotch? Good times. We’ve culled shots of them from season one and today, and the comparison will show you just how much our depressed little desk jockeys have grown up. We can only imagine what they’ll become next. Hopefully, it won’t involve any of Meredith’s other erogenous zones.

The Fug Girls Compare the Office Drones’ Style Sense, Then and Now

overnights 6:00 a.m.
Schmigadoon! Recap: Sex Education Josh and Melissa start to make a real impact on Schmigadoon, with mixed results.
overnights 4:00 a.m.
Ted Lasso Recap: A Heart-to-Tartt Talk The vibes are still good for the AFC Richmond crew, but how long can they get by on tie games?
my music video is dropping 2:11 a.m.
Skepta Takes You to ‘Nirvana’ in New Single Featuring J Balvin From his new EP, All In.
my music video is dropping 1:12 a.m.
Slide Into Summer With Silk Sonic’s ‘Skate’ Smooth as ever.
my album is dropping 12:03 a.m.
We’re Happier Than Ever That Billie Eilish Dropped Her New Album She broke her own record for most Apple Music pre-saves.
trailer mix Yesterday at 9:24 p.m.
Behold, the House of Gucci Trailer Has Everything The wigs, the accents, the costumes!
overnights Yesterday at 9:15 p.m.
RuPaul’s Drag Race All-Stars Recap: Girl Gone The gag of this episode’s ending. It’s horrifying, it’s entertaining, it’s shocking … it’s drag. No notes.
now streaming Yesterday at 5:30 p.m.
How Do You Watch Jungle Cruise? Here’s everything you need to know before you hop aboard your couch to stream Disney’s latest film.
production delays Yesterday at 5:02 p.m.
A Running List of Shows Forced to Pause Production Because of COVID Some shows have resumed filming while others are still up in the air.
now streaming Yesterday at 4:00 p.m.
The 40 Best Movies on Netflix You Probably Haven’t Seen Oddball comedies, twisty thrillers, and other underseen gems.
lawsuits Yesterday at 2:47 p.m.
Scarlett Johansson Is Suing Disney for Releasing Black Widow Online Live, laugh, love, lawsuit.
buffering Yesterday at 2:30 p.m.
Is This NBC’s Nightmare Olympics Scenario? Low ratings, Peacock complaints, and unhappy advertisers: Welcome to Tokyo.
review Yesterday at 2:01 p.m.
We’re Still Getting Woodstock ’99 Wrong HBO’s Woodstock 99: Peace, Love, and Rage documentary feels drunk on chaos.
By Craig Jenkins
trailer mix Yesterday at 1:56 p.m.
Hear Jessica Walter Complain About Butterflies in the Archer Season-12 Trailer Premiering on FXX on August 25.
streamliner Yesterday at 1:51 p.m.
Hulu Says ‘Sports Fans, We See You’ With a New Add-on Football, motorsports, competitive fishing, and more will soon be at your streaming fingertips — if you’re a Hulu + Live TV user.
trailer mix Yesterday at 1:27 p.m.
The Final Season of Brooklyn Nine-Nine Is Here and, No, It’s Not a Post Office One last ride-along begins August 12.
videology Yesterday at 1:08 p.m.
Pop Smoke and Dua Lipa’s ‘Demeanor’ Video Gives Bridgerton Realness Off the late rapper’s second posthumous album, Faith.
biopics Yesterday at 12:42 p.m.
House of Gucci Posters Have Arrived Mamma mia.
lawsuits Yesterday at 12:30 p.m.
Esmé Bianco Sues Marilyn Manson for Sexual Assault and Battery His lawyers called the allegations a conspiracy “to monetize and exploit the Me Too movement.”
renewals Yesterday at 12:17 p.m.
Netflix to Satisfy Your Cravings for Sweet Tooth Season Two The DC Comics adaptation premiered June 4.
More Stories