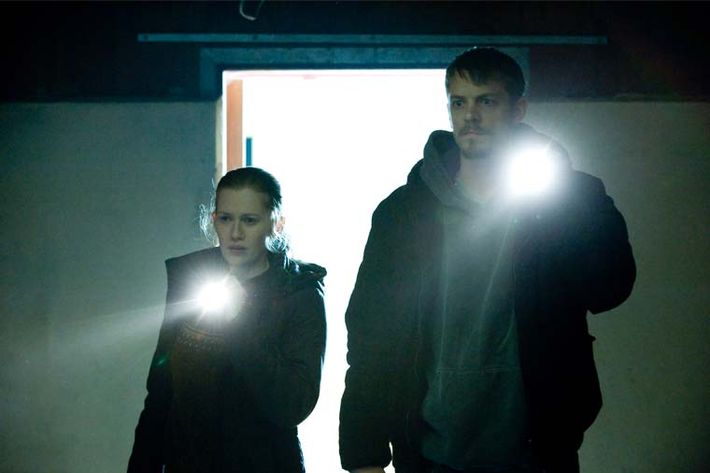 Last week’s episode was a washout — and we’re not just talking about the weather. The Killing’s clearly established M.O. — a bone-deep meditation on a single perplexing crime and its residual ripples through one very soggy community — began to feel less like an opportunity and more like a straitjacket. Real leads quickly became red herrings, genuine emotional suffering on the screen left the audience suffering on the couch, and attempts to make us care about the mayoral race seemed as doomed as a convertible dealership in Seattle. And yet commenters preached patience and just maybe they had a point: “Vengeance” didn’t address all our concerns about the overall success of the series, but it did lead us down a number of new rabbit holes and — just in case we were getting too complacent — blew out a number of preconceived expectations with a bravura, bizarro conclusion.

But first we begin where last week ended: Backsliding former bagman Stan is driving a strangely composed Bennet Ahmed to what we presume will be a watery grave. While Holder is being his usual, charming self to the rest of the Larsen family — getting thrown out by a furious Mitch, referring to Stan’s bud’s “puffy white ass” and its relative odds of survival in the big house, Linden is busy interviewing a calmer, hammer-free Mrs. Ahmed who defends her husband (“he’s all about changing lives and helping people”) and admits it was jealousy of all the “little 17-year-olds” that led her to stake out the school dance. But two key revelations: One, Mrs. Ahmed once suffered a miscarriage and, as a result, has been cautioned not to lift anything heavy. (“Not even a water-logged corpse?” asks Linden’s heroically stoic eyes.) And two, the book that Rosie returned to her favorite inappropriate teacher wasn’t a Victorian novel (isn’t that what we were told last week?) but, in fact, a Koran. Even better/worse, there’s a new suspect: “Mohammed” a guy from the nearby mosque who’s been studying scripture with Bennet. Provocative? Absolutely. But that’s all we’ll get as a soggy Bennet returns home via cab. Stan let him go with a speech about how daughters are different than sons in place of a bullet between the eyes, leaving Bennet soaked, cranky, and most definitely lawyered up for the foreseeable future.

We enjoyed the tension in these opening scenes, and it was a relief to see the Ahmeds both cleared of their implicit guilt (the one witness is now, regretfully, a loony) and further implicated in whatever the hell is actually going on. Still, it wouldn’t be The Killing if we didn’t spend a little bit of time with ridiculous, off-putting things, so let’s burn through them quickly. One, Linden is not going to Sonoma. We have known that since day one and it doesn’t matter how many seven-layer cakes Rick airmails from wine country: She ain’t trading in her parka anytime soon. (A few weeks ago, for its 100th episode, 30 Rock introduced Michael Keaton as a hardscrabble handyman overly excited to get through his “last day” without any trouble. Needless to say, after a few gas leaks and a bullet in the stomach, he doesn’t make it. And yet that scenario still somehow had more implicit tension than Linden’s southern migration.) But we still had to see her race to the airport only to miss her flight and continue to disappoint her judgey, nautical pal Reggie and confuse her socially challenged son, Jack. (It does allow for a pretty great moment of mother-son bonding, however, when Linden gives Jack a ten-minute tutorial on paintball and the fine art of long-range gunplay. Happy Mother’s Day, America!)

The second false note was also mother related: in that Mitch’s shows up straight from central casting (“Get me an ethnic cliché — stat!”) and needs to be returned there ASAP. “Some life your sister has!” Mama Mitch declares as she makes her famous French toast and litters the kitchen floor with racism bombs. “You have blacks, yellows, whites … nothing good can come from this mixing!” Yikes.

But the negativity ends there because we enjoyed watching the various characters adjust to their new normal. For Darren, this means acknowledging the fact that his gravelly voiced nobility isn’t going to get him elected mayor. “Adams laid a bear trap and you walked into it,” bellows noted bear-trapper Jamie, reiterating that they need to distance themselves from Bennet Ahmed, and fast. Darren is troubled — he’s seen hundreds of Power Rangers be unfairly scapegoated — but he doesn’t actually do anything until Mayor Adams’s latest attack ad interrupts his desktop nookie with Gwen. The sexy time is thus moved from the in-box to the out-box (classic desktop humor!), and Darren, after a detour to his former mother-in-law’s house (the drunk driver who killed Mrs. Richmond is being paroled, mom-in-law is ready to forgive — and thinks that Darren hasn’t forgiven himself, hence his reticence to go full retard on his political opponents) returns to the city council with his game face and Batman voice back in full effect. Unfortunately the Mayor has called in some smug political chits and gets the council to defund Darren’s entire after-school program, all because Bennet Ahmed couldn’t keep his letter-writing fingers to himself. (Because we’re feeling positive this week, we’re also not going to mention that the Seattle City Council chambers looked suspiciously like a dowdy Starfleet conference room. Somebody call Drexler at whatever afternoon cocktail party he’s attending and get him to pony up for a new City Hall!)

The new normal for Stan is an attempt at maintaining the old normal: Freed from his violent revenge fantasies (for now), the big man is now sharing his emotions with his wife, comforting his sons (even if it means taking them to fly kites in Seattle’s most dependably depressing public space, Munch Park), and trying to get it on with his wife. But it’s not a political attack ad that interrupts his amorous intentions — it’s Mitch herself. Not only is she just barely “doing the best she can,” she’s also developed her own serious case of Lady MacBeth–itis — conferring with Stan’s Bud (who IMDb.com informs us is actually named “Belko”) and obsessing over the Ahmeds from outside their front door.

But, predictably, the best bits fall to the Pacific Northwest’s greatest comedy team, Linden ‘n’ Holder. The latter is annoyed that the former isn’t safely in California “pruning up [her] rosebushes and playing housewife and all that,” adding an even more enjoyable frisson of mutual dislike to their already fairly ridiculous union. In pursuit of an elusive search warrant, the half-dynamic duo check out the mosque where they ham-handedly (no halal!) interview an Imam. While the holy man is a big fan of Darren Richmond, he’s not a fan of the Seattle PD’s handling of a missing black girl — who, no doubt, will be the focus of a sister show, The Black Killing, coming this fall on BET. Linden thinks the guy has a point, while Holder thinks the guy is wearing a dress (get a room, you two!). Either way, the Imam slips them an address that our heroes dutifully check out. It appears to be a meat market of some kind, but the real entrance is in the back, off an alley. After leaving another fruitless message for Rick (who, despite his lack of a callback, finally seems to have gotten the actual message from his OCD maybe-future-wife), Linden and Holder enter … what exactly? An all-white room, meat hooks on the wall. Holder breaks a lock, the two enter a creepy freezer, guns drawn …

And then faster than you can say “Abbotabad safe house,” the FBI swarms in, machine guns drawn, and tackles Linden and Holder to the ground. Whoa! That was unexpected, right? And, even better, it opens up the weeks ahead to all sorts of strange and intriguing possibilities: Is the case bigger than just Rosie Larsen? Is Mitch Larsen the one we need to be keeping an eye on? Or maybe we just misheard and these jackbooted thugs are actually with the FDA — and they’re annoyed the Seattle PD may have contaminated a vegan processing facility. Either way, things are looking down for our characters. But they’re looking up for those of us at home.

pharbz rise up 29 mins ago
Phoebe Bridgers & Matty Healy Surprise Fans With the Duet of Tumblr’s Dreams *Cries in jean jacket & Doc Martens*
memorial 2:01 p.m.
Husband of Halyna Hutchins, Rust Cinematographer, Speaks on Tragedy American Film Institute has created a scholarship in honor of Hutchins.
tired (swifties' version) 12:52 p.m.
Taylor Swift Leaves More Clues for TiRED Swifties How can we connect this news to the next four Fridays?
remembrances 7:00 a.m.
The Naomi Shelton We Knew An evening remembering the late Gospel Queen, village voice, and forever friend.
By Saki Knafo
obits 2:31 a.m.
Peter Scolari, Girls and Bosom Buddies Star, Has Died The actor was 66.
explainers Yesterday at 11:00 p.m.
Everything We Do and Don’t Know About the Fatal Rust Set Shooting The camera crew had reportedly walked off the set to protest work conditions earlier that day.
he's back Yesterday at 9:46 p.m.
Hayden Christensen Is Reprising His Role As Anakin Skywalker In the live-action Star Wars series Ahsoka, starring Rosario Dawson.
life in plastic Yesterday at 7:34 p.m.
Ryan Gosling Will Play the Ken to Margot Robbie’s Barbie In the Greta Gerwig movie about the Mattel doll.
obituary Yesterday at 6:32 p.m.
Remembering the ‘Tireless’ Halyna Hutchins, a Rising Cinematography Star Friends and colleagues recall the cinematographer’s work ethic and artistic eye: “There is no excuse I can accept for this loss.”
By Chris Lee
overnights Yesterday at 6:27 p.m.
Canada’s Drag Race Recap: Cirque du So Gay Send in the clowns.
follow friday Yesterday at 6:09 p.m.
Grace Freud Is One of Only 10 Gay People Left on Earth We caught up with the comedian on Instagram Live.
lowkey reminder Yesterday at 5:27 p.m.
Are the Characters of Insecure Okay?! Going Into Season 5? A brief rundown of who’s killing it and who’s on the verge of a breakdown as the HBO series heads into its final season.
overnights Yesterday at 4:27 p.m.
I Know What You Did Last Summer Recap: You Got Nothing to Hide Everyone finally recognizes Clara for the obvious murder suspect she is.
tv review Yesterday at 4:17 p.m.
Insecure Remains Magical and Messy in Its Final Season The series draws to a close with a characteristically effervescent yet uneven exploration of the dynamics of 30-something life.
dunes Yesterday at 4:00 p.m.
How to Watch Dune, the Year’s Sandiest Movie The sci-fi epic hit HBO Max a day early.
now streaming Yesterday at 4:00 p.m.
What’s Leaving Netflix: November 2021 Glee, School of Rock, Waterworld, and more.
dyune Yesterday at 3:59 p.m.
A Brief Ode to Sand, a Powerful Cinematic Supervillain Forget the lusty sea, it’s time to recognize sand, and then run away from her, screaming.
crime Yesterday at 3:56 p.m.
Robert Durst Charged With the Murder of His Wife After 39 Years Days after being convicted of killing a friend for what she knew.
stand-up Yesterday at 3:23 p.m.
The Stand-up Set Cycle, From Notebook to TV Special Ricky Velez, Ronny Chieng, and Gary Gulman on how they develop new hours after leaving the old ones behind.
overnights Yesterday at 3:00 p.m.
Invasion Recap: In the Stars Invasion’s forward progress hits a wall in an uneven transitional episode.
More Stories