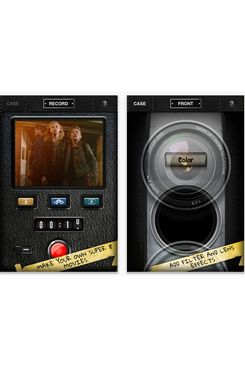 We have an especially ripe crop for you Bytehards this week: YouTube goes to Blockbuster, a return to stop-motion cinema, the cutest Vulture Byte ever, Photoshop on the iPad, and a new entry for the skeuomorph chronicles.

We await your fan-, chain-, and hate-mail, as always, at VultureBytes@gmail.com.

Just in case iTunes, Amazon, Netflix, and all the other boutique digital rental places weren’t enough, there’s now yet another place to rent movies online. And that place is YouTube. After months of flirting with movie rentals, the site recently decided to commit in full, now hosting about 3,000 movies that you can rent for 24 hours for about the same price you’ll find everywhere else. The selection is solid, with relatively new releases like The Green Hornet, The King’s Speech, and Blue Valentine. There are also some free releases tossed in, but likely nothing you can’t already find on Hulu or Netflix. So next time you’re trying to piece together the plot of Harry Potter and the Deathly Hallows based on the two-minute scenes somebody illegally uploaded, do yourself a favor and just rent the whole thing instead.PRICE: Depends, but usually $4
Vulture Bytes is as much about helping you create pop culture as it is about helping you consume it. And for those of you who watched way too much Claymation growing up, this is about as ideal a filmmaking app as possible. It hijacks your iPhone, takes bursts of photos, and then assembles them into a movie quickly and without any noticeable loss of quality. What you get is an amateur stop-motion short, the kind of thing that oozes indie-film cred. If you make it meta — maybe a film about apps filmed entirely using an app — we’re sure you could find a film festival that would take it in. Something about “new media begets new media.” Feel free to borrow the tagline. PRICE: Free
We promise that this is the cutest gadget that Vulture Bytes will ever feature. It’s an MP3 player in a teddy bear. Apparently it comes with preloaded “cuddletune lullabies,” but something tells us you can hack into this thing pretty easily and at least load it up with some Raffi, if not some White Stripes. You can also use the Cuddletunes site to record your own narration, so it can always be story time even when you’re not around. Also, it’s an MP3 player in a teddy bear. In case that wasn’t enough of a selling point. PRICE: $60
Vulture Bytes is no artist, and yet even we can acknowledge that the new Photoshop apps for touch devices are innovative steps forward for all of you who have rediscovered finger painting in the age of touch screens. Adobe has released three new apps for touch devices, and the one you, the average reader, will care most about is Eazel, a different way to think about drawing on your iPad. If you’ve been using an app like Brushes, you’re used to the basics of touch-art, but Eazel offers an entirely new way to go about it, with an interface that’s as touchy as it gets. Rather than fumbling through menu after menu, adjust your brush size, color, and opacity by putting your whole hand down on the screen and moving the corresponding figures. There are also some special effects with “wet” and “dry” paint that we couldn’t figure out how to use correctly. But the rest of you are far more artistically inclined — you’ll manage just fine. PRICE: $5
The Skeuomorph Hall of Fame welcomes its newest member: the Super 8 app. As a quick reminder, skeuomorphs are a quirk of modern tech that Vulture Bytes is moderately obsessed with. They’re what happens when a new technology mimics an old, even though it no longer needs to. When you take a picture on an iPhone and there’s a shutter-close animation, that’s a skeuomorph. And here we have another camera-based skeuomorph, this time in video. The Super 8 app, pegged to the latest J.J. Abrams Top Secret Project, of course, turns your iDevice into the kind of old video camera that Abrams tooled around with when he was a kid. Really, all that means is it puts a scratchy filter on top of the video you shoot. But within the app, it looks far more complicated, with all the “authentic” lens changes and sounds you’d expect from a real Super 8 cam. PRICE: Free

Vulture Bytes: Cinema New and Old, With a Side of Super-Cuteness

vaccine watch 4:20 p.m.
All the Celebrities Who Have Received the COVID-19 Vaccine So wholesome.
By Gabrielle Sanchez
bachelor nation 4:00 p.m.
The Bachelorette’s Clare Crawley Splits From Her Halloween-Costume-Model Fiancé “Obviously, it’s not the greatest situation,” Dale Moss now says.
1.5x speed 3:05 p.m.
How It Happened and 4 More Podcasts Worth Trying Including the end of Trump, Inc.
vulture lists 2:45 p.m.
Megan Amram’s 103 Best Trump Tweets, Ranked Megan Amram has hundreds of great Trump tweets. Here are the best of the best.
By Megh Wright
extremely online 2:06 p.m.
Okay, You Can Unmute @POTUS Now The Twitter handle is under new management.
inauguration day 1:42 p.m.
Return to Normalcy With Some Bernie Sanders Memes The only man who dresses for January, ladies and gentlemen.
bye 1:35 p.m.
Donald Trump Went Out As He Came in: Playing Songs by People Who Hate Him A perfect season-finale moment.
we did it joe 1:07 p.m.
Jennifer Lopez Slips ‘Let’s Get Loud’ Into Her Biden Inauguration Performance A new era indeed.
inauguration day 12:39 p.m.
Watch Lady Gaga Perform the National Anthem at the Biden Inauguration Obama, Biden, Bush, and more attended a one-song Lady Gaga concert today.
inauguration day 12:36 p.m.
Watch Amanda Gorman’s Historic Poetry Reading at the Biden Inauguration “But while democracy can be periodically delayed, it can never be permanently defeated.”
inauguration day 12:32 p.m.
Garth Brooks Turns ‘Amazing Grace’ Into a Sing-along at Biden Inauguration He even took off the hat.
vulture lists 12:30 p.m.
The 20 Best Movies About American Presidents Frost/Nixon, Secret Honor, Lincoln, and more.
bachelor nation 10:58 a.m.
Did Matt James Seriously Just Spoil His Bachelor Winner on … Spotify? Somebody tell this man that his streaming history is public.
lime crime 10:18 a.m.
Dakota Johnson Lied to Us About Loving Limes You can’t spell “limes” without “lies.”
reality tv 10:09 a.m.
Real Housewives of Salt Lake City Will Return for Season 2, Andy Cohen Confirms Keep those Wednesday nights open.
vulture recommends 9:00 a.m.
Call My Agent! Brings a Succession Energy to the Parisian Entertainment Industry The French series offers an alluring new vantage point on the industry-insider machinations we typically associate with Hollywood stories.
last night on late night 2:03 a.m.
Seth Meyers Takes One Last Closer Look at the Trump Presidency “You left the nation in ruins.”
pardon? 12:00 a.m.
Trump Pardons Lil Wayne on His Last Day in Office Along with Kodak Black.
covid-19 Yesterday at 6:59 p.m.
Nurse Lori Marie Key Sings ‘Amazing Grace’ at COVID-19 Memorial Vice President-elect Kamala Harris introduced her.
inauguration day Yesterday at 6:30 p.m.
Here’s How to Watch the 2021 Presidential Inauguration of Joe Biden What time is it? Can I watch it if I don’t have TV? What’s the deal with the Celebrating America prime-time special? We have the answers.
More Stories